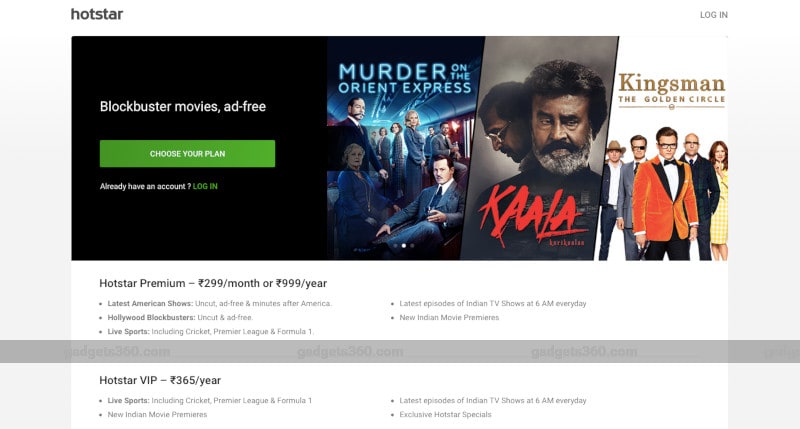 Hotstar has quietly revised the pricing of its monthly Hotstar Premium subscription plan. The plan now costs Rs. 299, up from Rs. 199 earlier. There is no change in the pricing of the annual subscription plan price or the recently introduced Hotstar VIP plan. The updated pricing is already live on the streaming service's website. Meanwhile a report is suggesting that the content of Disney+, the newly announced Disney streaming service, will be available via Hotstar in India. After the closure of Disney's 21st Century Fox acquisition last month, Disney became the official owner for Hotstar.

As per the subscription packages page on the streaming service's website, the consumers will now have to shell out Rs. 299 for Hotstar Premium monthly subscription, whereas the annual plan remains available at Rs. 999. Both Hotstar Premium subscription plans include access to American TV shows, Hollywood movies, live sports, latest episodes of Indian TV shows, Indian movie premieres, and Hotstar Specials. Consumers who don't want to watch American shows or Hollywood movies can opt for the Hotstar VIP plan, which was introduced last month, at just Rs. 365 annually.

It remains unclear if the revised monthly pricing for Hotstar Premium is applicable to just the new subscribers or whether the existing subscribers will also have to pay the new price beginning the next cycle in their subscription. We have reached out to Hotstar for more clarity on the revised pricing and will update this report when we hear back.

Separately, Mint is reporting that the content created for Disney+ streaming service, which is set to go live in the US in November this year, will be available on Hotstar in India, owned by Disney subsidiary Star India. The publication claims that Disney is not planning to launch Disney+ as a standalone streaming platform in the country. However, at the time of Disney+ announcement, Disney had stated (PDF) that the streaming service will be rolling out in Asia Pacific throughout 2020 and 2021, without specifically mentioning India.

The Mint report also notes that Hotstar plans to localise the Disney+ content for the Indian market by dubbing, or by adding subtitles for various local languages. It is believed that the inclusion of Disney+ content in Hotstar portfolio will not impact the subscription prices of the service, which also makes sense given Hotstar has just increased the price of its monthly Premium subscription.

There is no word on exactly when Hotstar subscribers can expect to see Disney+ content.

Which Is the Best Budget TV to Buy in India Right Now?
Cricket 19 for PS4, Nintendo Switch, and Xbox One India Price and Release Date Announced