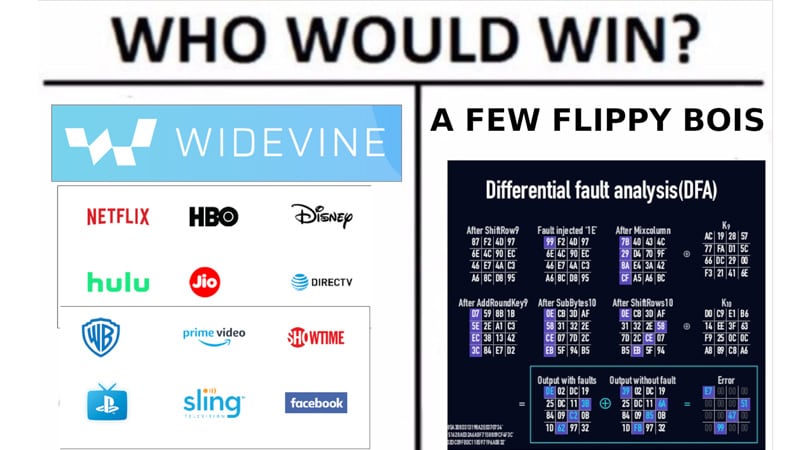 Widevine is a digital rights management (DRM) platform owned by Google that allows content providers like Netflix, HBO, etc., to stream video content to end users in a secure environment, in order to avoid unlawful duplication and distribution of their content (aka: piracy). However, security researcher David Buchanan claims to have broken Google's Widevine L3 DRM, which would technically allow you to download an unencrypted copy of a video stream so it can be played on pretty much any standalone video player.

Buchanan tweeted that the Whitebox AES-128 cryptography used by the Widevine L3 platform is vulnerable to a “well-studied DFA (differential fault analysis) attack" that can be used to recover the original key, and then decrypt the stream. He also boasts that it took him just a “few evenings” worth of work to crack this. With the decryption key in hand, Buchanan claims that the videos can be streamed with FFmpeg, which would make it very easy to record and convert the streamed video to any of the popular formats. Buchanan hasn't shared any details on how this is actually accomplished, but added he took the help of Philippe Teuwen and the Side-Channel Marvels project.

For now, it is unclear if Buchanan reported the vulnerability to Google before his disclosure on Twitter. He said he doesn't consider this a bug, adding that DRM is flawed by design. He suggested Google can make the DRM more DFA-resistant with more obfuscation, but that "would slow down performance."

While this is a big blow for streaming services, we have to keep in mind that Widevine L3 is at a lower security level, which means your video streams are usually capped at sub-HD resolutions. For HD video streaming and higher, content providers rely on the Widevine L1 DRM platform, which is more secure as all the cryptography and content processing is performed within a Trusted Execution Environment (TEE) inside your device's processor, which is a lot harder to crack. That's also the reason why phones like the Xiaomi Poco F1 (Review) and the OnePlus 5T (Review) were unable to playback streaming HD videos when they first launched. Widevine is currently used by all major streaming services like Netflix, HDO, Disney, Jio, Prime Video, Facebook, etc., to stream content on devices running Android and on browsers like Chrome and Firefox.