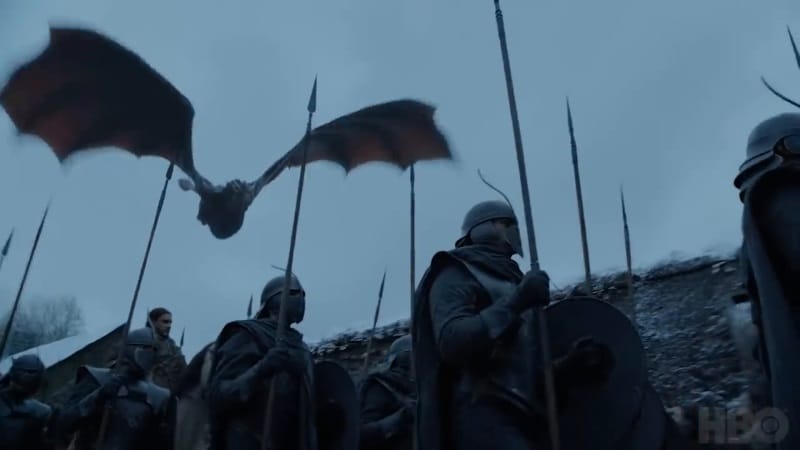 HBO has released a new two-minute promo trailer for its upcoming shows in 2019, which includes six new seconds of footage from Game of Thrones' eighth and final season, alongside sneak peeks at the new Watchmen show from Lost co-creator Damon Lindelof, the series adaptation of epic fantasy adventure novel series His Dark Materials that stars Dafne Keen (Logan), Lin-Manuel Miranda, James McAvoy and Ruth Wilson, the second season of Big Little Lies, and the final season of Veep among others. Veep season 7 premieres at the end of March, Game of Thrones returns in April, while Big Little Lies season 2 is slated for June.

The new Game of Thrones season 8 footage — seen from 0:48–0:54 in the clip below — once again focuses on Winterfell, in an attempt to stay away from spoiling anything. You can see Drogon, one of Daenerys Targaryen's two remaining dragons, fly over a company of the Unsullied, who are sporting several layers of clothing, to stave off the biting cold of the Westeros north. In another scene, as a group of Winterfell citizens rush away from what potentially seems like an off-screen danger, the grown-up and expertly-trained Arya Stark (Maisie Williams) almost seems to relish the prospect, on the other hand.

As for Watchmen, Oscar winners Jeremy Irons (Justice League) and Regina King (If Beale Street Could Talk) show up in the new Watchmen footage. Irons is playing the anti-villain Adrian Veidt aka Ozymandias, as per reports, who was played by Matthew Goode (Downton Abbey) in the 2009 film version directed by Zack Snyder. King will play a new character called Angela Abraham.

That brings us to His Dark Materials, which HBO has co-produced with BBC. Its presence in the new promo trailer confirms that it will air later this year. Wilson, McAvoy, and Miranda are seen in first footage from His Dark Materials, alongside what could be Keen as the title character, Lyra Belacqua. Wilson is playing the villain Marisa Coulter, who's the former lover of Lord Asriel, an aristocrat played by McAvoy. Miranda will star as Lee Scoresby, a skilled balloonist who joins a mission to save some kidnapped children.

His Dark Materials is set in a parallel universe that's dominated by the Church. It has already been renewed for a second season.

Game of Thrones season 8 premieres April 15, 2019 on Hotstar. Release dates have not been set for Watchmen and His Dark Materials.