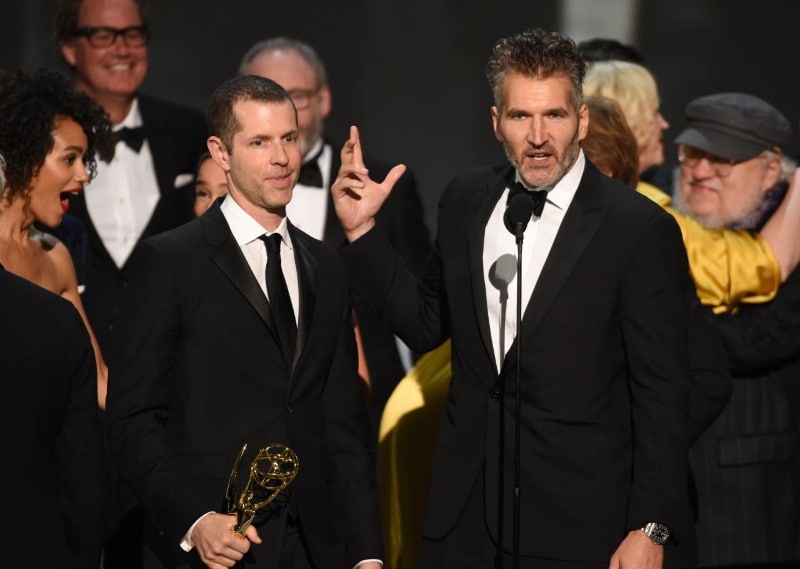 Game of Thrones' D.B. Weiss and David Benioff at the 2018 Emmys

Last February, Lucasfilm announced that Game of Thrones creators David Benioff and D.B. Weiss would write and produce a new series of Star Wars films. We haven't heard anything since, particularly because both have been busy with the eighth and final season of Game of Thrones, but HBO president Casey Bloys dropped a potentially interesting nugget of information last Friday. According to Bloys, Benioff and Weiss will work on a new Star Wars trilogy, just as The Last Jedi director Rian Johnson is currently doing so.

“Dan and David are finishing up the final season [of Game of Thrones] and then they are going to go into the Star Wars universe,” Bloys told TVLine. “When they come out of that, I assume they will come back to us.” The HBO president is referring to Confederate, the planned HBO series set in an alternate universe where the American Civil War ended in a stalemate, when he mentions Benioff and Weiss coming back to HBO after Star Wars.

Announced back in July 2017, Confederate instantly became controversial with users on the Internet, with some dubbing it “slavery fan fiction”. But Bloys said the show's development hasn't been affected by that and added: “The delay has to do with [the fact] that they were offered three movies.”

It's “really up to [Benioff and Weiss],” Bloys added. “It's hard to say to someone, ‘You can't go do Star Wars.' They love it. It's a childhood dream. They'll go do that, remember why they love television and come back.”

Taking all of that into context, Bloys seems to suggest that the Star Wars series of films Benioff and Weiss were offered is actually a trilogy. But it's worth noting that this isn't coming directly from Lucasfilm itself. As /Film points out, Bloys “may be assuming that they're working on a trilogy since every series of Star Wars movies […] has consisted of three movies”, aside from anthology chapters such as Rogue One and Solo.

With Game of Thrones set to wrap up with season 8 in 2019, it's possible that we might get to hear more about Benioff and Weiss' take on Star Wars later this year. For now, we have Star Wars: Episode IX to look forward to, which releases in December 2019.

Made in Heaven Trailer: Gully Boy Makers Are Behind Amazon Prime Video’s Next Original Series
NASA to Launch New Space Telescope in 2023 to Explore Origins of Universe