Diana Rigg, Game of Thrones and The Avengers Star, Dies at 82

Rigg also enjoyed a successful career on stage, and was honoured as Dame for her services. 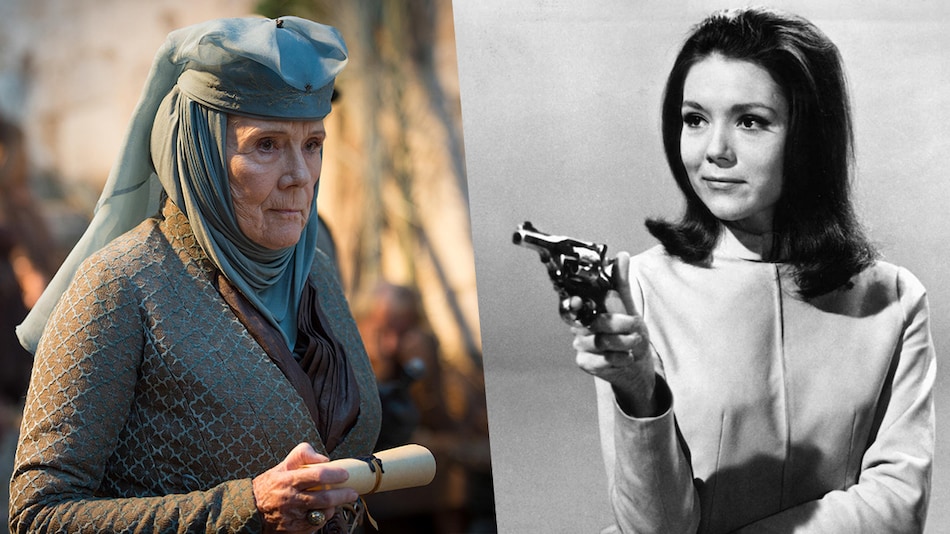 Diana Rigg in Game of Thrones, and The Avengers

Diana Rigg, the English actress best known for playing the queen-of-quips matriarch Olenna Tyrell in the fantasy epic Game of Thrones, the martial arts spy Emma Peel in the British TV series The Avengers, and a Bond girl in On Her Majesty's Secret Service, died Thursday at the age of 82, six months after being diagnosed with cancer. Though best known for her work on-screen, Rigg also had years of success on the stage. She is an Emmy, Tony, and BAFTA TV winner. In 1994, Rigg was given the title of “Dame” in honour of her services to drama.

“My beloved Ma died peacefully in her sleep early this morning, at home, surrounded by family,” Rigg's actress daughter Rachael Stirling said in a prepared statement. “She died of cancer diagnosed in March, and spent her last months joyfully reflecting on her extraordinary life, full of love, laughter and a deep pride in her profession. I will miss her beyond words.” Rigg's agent Simon Beresford added that the Rigg family “have asked for privacy at this difficult time.”

“Be a dragon. The realm will always remember Diana Rigg,” the official Game of Thrones Twitter account said.

“She always raised the bar with her incredible talent, intelligence and wit. An absolute joy and honour to work with. May her soul rest in peace,” her Thrones co-star Nikolaj Coster-Waldau said on Instagram.

Her Bond co-star George Lazenby said on Instagram: “She undoubtedly raised my acting game when we made On Her Majesty's Secret Service. [...] Her depth of experience really helped me. We were good friends on set. [...] I was sorry to have lost my wife in the film at the end. [...] As my new bride, Tracy Bond, I wept for her loss. Now, upon hearing of Dame Diana's death, I weep again. My deepest condolences for her family.”

Rigg is currently on screen in the All Creatures Great and Small remake, airing Tuesdays on Channel 5 in the UK and PBS in the US. She will also be seen posthumously in Edgar Wright's next movie, Last Night in Soho, and the miniseries adaptation of Black Narcissus, set to air on BBC One and FX.

Born to Louis Rigg and Beryl Hilda in 1938 Doncaster, England, Rigg spent over seven years of her childhood in Bikaner, Rajasthan, as her father worked for Bikaner State Railway in British India. Rigg learnt Hindi and spoke it as a second language by the time she returned to England after World War II, the BBC reports.

Rigg graduated from school in 1955 and enrolled into the Royal Academy of Dramatic Art, where she trained as an actress for the next two years. She would make her stage debut in The Caucasian Chalk Circle at the 1957 York Festival, and subsequently joined the Royal Shakespeare Company.

She auditioned for The Avengers in 1965 on a whim and was cast. The role brought her international fame, made her a feminist role model as Emma Peel was both sexy and capable in her own right, and became a fashion icon and sex symbol. But that also meant constant media attention and Rigg was annoyed by the invasion of her privacy.

Rigg left the role two years later but not before fighting for equality. After discovering that she was making less than the cameraman, the BBC reports, Rigg fought for a pay rise. In 2019, as the gender wage gap swirled in the news, Rigg said: “Not one woman in the industry supported me [then] ... Neither did [my co-star] Patrick [Macnee]. I was painted as this mercenary creature by the press when all I wanted was equality. It's so depressing that we are still talking about the gender pay gap.”

She would transfer her talents to the big screen with the 1969 Bond movie On Her Majesty's Secret Service, playing Countess Teresa di Vicenzo, the only Bond girl to ever become Bond's wife on-screen to date. Though as Bond fans will remember, the marriage didn't last long as Rigg's character was shot dead soon after.

Rigg continued appearing in British films and returned to stage, in London and on Broadway. She earned her first Tony Award nomination in 1971, and a second four years later. In 1988, she was given the honour of the Commander of the Order of the British Empire (CBE).

In 1990, she won a BAFTA TV award for playing an obsessive mother in BBC's Mother Love, and then carried that success to stage in playing the title role of Medea on stage. The play went from a local London theatre in 1992 to London's West End in 1993 and then to Broadway in 1994. Rigg won a Tony Award for her performance.

That made her Dame Diana Rigg. The honour is officially known as the Dame Commander of the Order of the British Empire.

Rigg would go on to win an Emmy for playing the main antagonist in a British-German adaptation of Daphne du Maurier's Rebecca. She continued appearing on stage and TV through the new century, though she began to take on less work.

In 2013, Rigg was part of the Victorian-era Doctor Who episode “The Crimson Horror”, written specially for her by writer Mark Gatiss. And that same year, she would be cast in Game of Thrones as Lady Olenna Tyrell, a political mastermind known as the Queen of Thorns, who arguably had the best lines on the show, something she herself acknowledged.

She was nominated four times at the Emmys for her Game of Thrones role, but hilariously, Rigg said in April last year that she had never watched the HBO series, considered one of the biggest and best shows of all time.