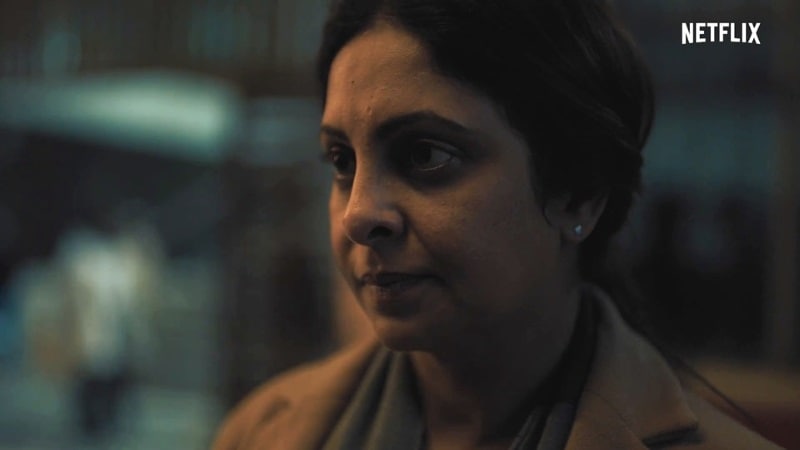 Netflix has released the trailer for Delhi Crime — its true crime anthology series set in the capital city of India — whose first season has been inspired by and follows the Delhi Police investigation into the Nirbhaya case, the rape of a young woman in December 2012. A fictionalised depiction, Netflix says it will “capture the complexities of the scrutiny, the emotional toll on the investigating team, and their determination to bring the perpetrators to justice in a fraught environment.” Starring the likes of Shefali Shah (Monsoon Wedding), Adil Hussain (Life of Pi, Hotel Salvation), Rasika Dugal (Mirzapur, Manto), and Rajesh Tailang (Siddharth, Selection Day), Delhi Crime has written and directed by award-winning Indo-Canadian filmmaker Richie Mehta (Amal, Siddharth).

The first and only Delhi Crime trailer opens with a patrolling unit of the Delhi Police finding the victims on the side of a road, before we are introduced to our protagonist: DCP South Delhi, Varthika Chaturvedi (Shah). DCP stands for Deputy Commissioner of Police, which is the equivalent of the Superintendent of Police (SP) in the UK and across the Commonwealth. The trailer then lays out the basic facts of the case and what makes it unique, before Chaturvedi insists that they must catch the six suspects within the first 10 hours, otherwise all of them might disappear. It also touches upon the politicisation of the case, the public protests, and the anger and frustrations of the families involved.

Delhi Crime has been produced by Mumbai-based, digital-focused Golden Karavan and Crazy Rich Asians' Ivanhoe Pictures. Golden Karavan's Aaron Kaplan, Jeff Sagansky, Florence Sloan, Apoorva Bakshi, Pooja Kohli, and Sanjay Bachani served as executive producers, alongside John Penotti, Kilian Kerwin, and Michael Hogan for Ivanhoe Pictures, with Robert Friedland, Sidney Kimmel, and Brian Kornreich as producers. The series premiered at the 2019 Sundance Film Festival back in January as ‘Delhi Crime Story', where it was acquired by Netflix and given a March release date.

All seven episodes of Delhi Crime season 1 will release March 22, 2019 on Netflix worldwide.