Dwayne Johnson stars in the lead of the DC movie. 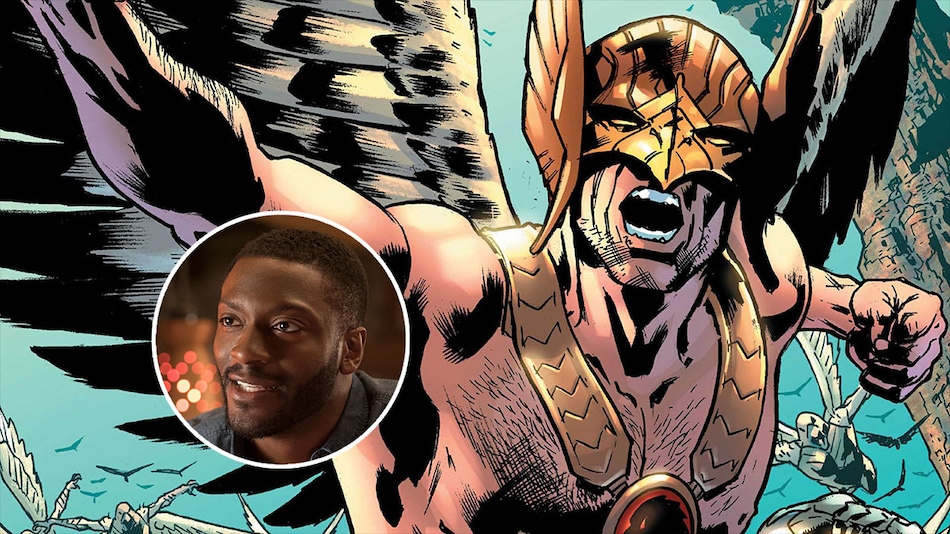 Black Adam has found its Hawkman. Aldis Hodge has been cast as the winged superhero opposite Dwayne Johnson's titular anti-hero in the upcoming DC movie, Johnson has confirmed. In the DC comics, Hawkman is the superhero alias of several characters, but a report says that Hodge will play archaeologist Carter Hall, the modern-day reincarnation of an ancient Egyptian prince named Khufu who was cursed and murdered by an evil priest. In Black Adam, Hodge's Carter Hall/ Hawkman will be the leader of the Justice Society of America, the primary obstacle for Johnson's Black Adam.

The Wrap first brought word of Hodge in talks to play Carter Hall / Hawkman in Black Adam. Later that day, Johnson took to Instagram to confirm his casting in the role and revealed that he would lead the Justice Society of America. Hodge is the third confirmed cast member after Johnson as Black Adam and Noah Centineo as Atom Smasher (also part of the Justice Society of America), whose presence was confirmed at DC FanDome back in August.

THIS IS HAWKMAN 🦅 A pleasure to welcome @aldis_hodge to BLACK ADAM. HAWKMAN is a critical leading role for our movie, as he is the fiery leader of the JSA (Justice Society of America) and one of the most beloved and legendary characters in the DC UNIVERSE. I called Aldis personally as I wanted to surprise him that he got the role and it wound up being one of the greatest conversations I've ever had. Aldis: Hello? DJ: Hello, I'd like to speak to Aldis. Aldis: Who is this? DJ: This is Dwayne Johnson. * long pause Aldis: Whoever this is stop playing on my phone. DJ: This is Dwayne, is this Aldis? * longer pause Aldis: This shit ain't funny, I said stop playing on my fucking phone. DJ: Aldis, this is DJ. I just called to say thank you so much for sending in your audition - it was great and I really appreciate the efforts you made. Just wanted to say thanks and best of luck in all you do. And one more thing — welcome to Black Adam. * longest pause Aldis: I'm sorry you'll have to hold on for a one second. * he puts the phone down and walks away and all I hear is inaudible yells 😂 Aldis: DJAYYYY OHHHHH SHIT!!!!!! * Im laughing my ass off by now. DJ: You ok? You're gonna crush this role! We went on to have an awesome conversation full of gratitude, love and motivation. Can't wait to work with this very talented brother. The perfect HAWKMAN. Let's get to work. #aldishodge #jsa #hawkman 🦅 #blackadam⚡️

At DC FanDome, Johnson also gave us the first details on his Black Adam movie. It starts off 5,000 years ago in Kahndaq where Johnson's character is a slave. After he breaks free, he's imprisoned by a Council of Wizards — they were also part of Shazam!, where the last surviving wizard gave protagonist Bill Batson his Shazam powers — for eternity. Black Adam wakes up in present day and is determined to never let anything get in his way. He then goes up against the Justice Society of America, featuring Hawkman, Doctor Fate, Cyclone, and Atom Smasher.

Hodge is best known for the 2008–12 TNT action crime series Leverage, the 2015 biopic Straight Outta Compton, and the 2016 biopic Hidden Figures. He was most recently seen in the Disney+ family comedy Magic Camp. His next film is Regina King's directorial debut One Night in Miami, which is touring the film festival circuit and is without a release date as yet.

Jaume Collet-Serra, who has previously worked with Johnson on Disney's Jungle Cruise — delayed due to the pandemic to July 2021 — is set as director on Black Adam. Rory Haines and Sohrab Noshirvani, creators of the British miniseries Informer, reportedly wrote a new script draft this month, working off a previous draft by Adam Sztykiel. Production is expected to begin on Black Adam in early 2021.

Black Adam is slated to release December 22, 2021 in cinemas worldwide.