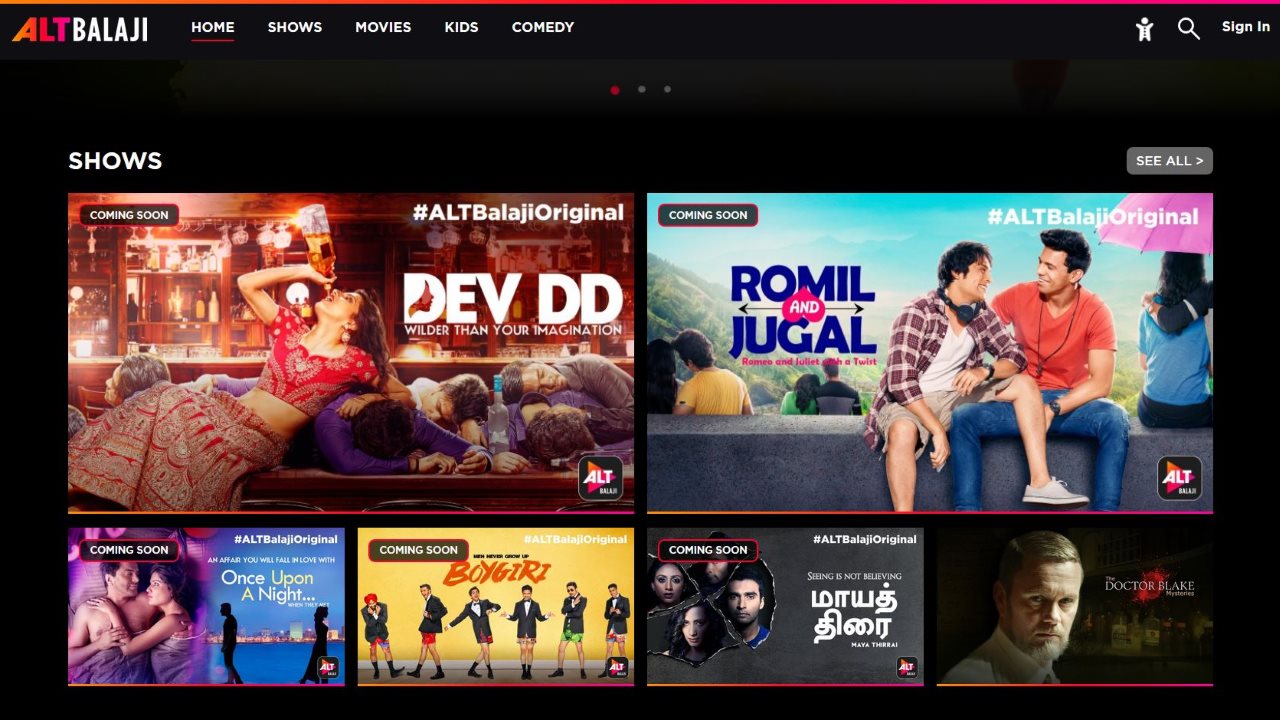 ALTBalaji, the online video streaming service from Balaji Telefilms, has finally launched after a delay of over seven months. The app was available as a beta for a while. As its name implies, the platform is looking to provide an alternative to "mainstream Indian entertainment”, which Balaji itself is a big part of.

In its announcement, Balaji Telefilms said original content is at the forefront of ALTBalaji’s mission, claiming it will produce and host over 300 hours in 2017. Currently, there are a total of five original shows listed on the service – Dev DD, Romil and Jugal, Once Upon A Night When They Met, Boygiri, and Maya Thirrai – with a ‘coming soon’ tag attached. For now, the app remains a proof of concept, with a sprinkling of free Indian movies, and Korean TV.

Ekta Kapoor, managing director and creative director of Balaji Telefilms, is naturally involved in producing some of the shows. Balaji also claims that “the platform fills in the existing void in the entertainment space”, which is speculation at this point, considering none of the original content is even available for viewing.

Balaji understands that it’s entering a crowded nascent market – aside from Netflix, Hotstar, and Amazon at the top, there are a bunch of smaller players too, in Voot, Eros Now, and Sony Liv – which is why the subscription-based service is currently open to everyone for free.

It will turn into a paid-only platform sometime next month, with one caveat – “select content and previews”, which probably means a pilot episode and trailers, will be available to viewers without a subscription. While the option to subscribe is greyed out in the app, the App Store in-app purchases (IAPs) list three different pricings – Rs. 100/ Rs. 180 (presumably for 3/6 months), and Rs. 300 for a year. On the Play Store, the IAPs range from Rs. 10 - Rs. 650, so it's unclear at this point if pricing is platform-specific.

ALTBalaji also has in-built features for parental control, and even an option to download content, and watch offline.

“We are glad to be among the first ones to be part of a game changing move into the global entertainment space starting with second biggest but fastest growing mobile market – India,” Nachiket Pantvaidya, CEO of ALT Digital Media Entertainment, said in a statement. “Consumers across the world are evolving aided by growing mobile reach; their requirements are becoming niche, rather than one formula fits all and this is where ALTBalaji belongs.”

Balaji said that ALTBalaji will be available across Android, iOS, Windows, Roku, and Apple TV, though only the first two apps are currently up.