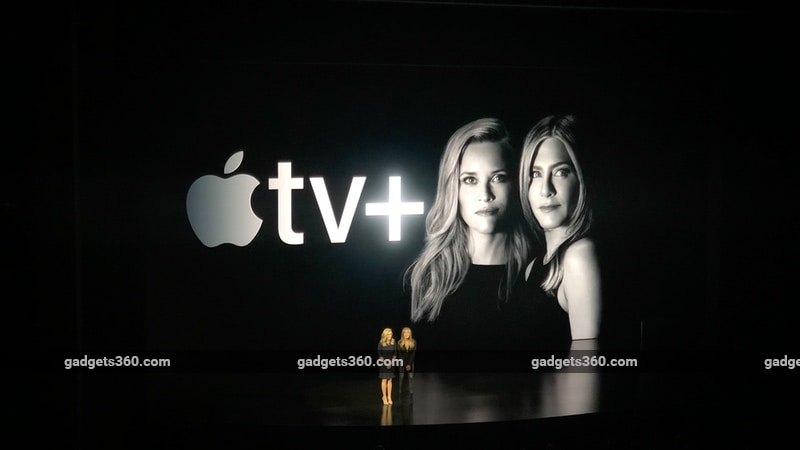 Apple's 'Show Time' event began at the Steve Jobs Theater in Cupertino, California, at 10.30pm IST on March 25, 2019. CEO Tim Cook walked to the stage to introduce Apple event 2019. Cook said this event is where Apple introduces new services, confirming that hardware is not going to be the focus of this event. Cook began with a recap of all the services Apple currently provides, such as iCloud, Apple Music, and Apple Podcasts.

Apple announced the launch of Apple TV+ , its new video streaming service that rivals Netflix. Renown filmmaker Steven Spielberg took to the stage to introduce the service and his new show on Apple TV -- Amazing Stories. Him and Oprah Winfrey were the two most famous people to take to the stage during the Apple event. Winfrey said she is working on two shows with Apple, one on mental health and the other on sexual assault survivors. Apple TV+ pricing will be revealed in Fall 2019, but it's confirmed that India will be among the countries that will get Apple TV+.

Steve Farrell, Jennifer Aniston, and Reese Witherspoon also introduced their new show, dubbed The Morning Show. Jason Momoa and Alfre Woodard took to the stage next, to launch their Apple TV show called See. Next, Kumail Nanjiani arrived on stage to talk about his show: Little America. A new show for kids called Helpsters, which wants to teach pre-schoolers about coding, will also be a part of Apple TV . This was followed by J. J. Abrams and Sara Bareilles entering the stage to talk about their show Little Voice. Apple TV will be ad-free, have Apple Originals, let you download all videos, available in over 100 countries, and will launch Fall 2019.

Apple announced that the Apple TV app has been redesigned. It will come to Mac later this year and iOS devices in May. The app will also make it to smart TVs from Samsung, Vizio, etc. and streaming devices from Roku and Amazon. This service will feature live channels that you can purchase individually -- called Apple TV Channels. You can also watch content from streaming services such as Showtime, Amazon Prime Video, and HBO. You can also watch content you purchased from iTunes. This app will be making it to over 100 countries across the world.

During this event Apple launched a paid subscription service for iPhone and iPad games. This service is called Apple Arcade and it'll feature over 100 games, which won't be on any other mobile platform or subscription service. Games such as Fantasian, Lifelike, Beyond a Steel Sky, Overland, among others are a part of this service. Apple Arcade will be available via the App Store, and will be available on iPhone, iPad, Mac, and Apple TV. You will be able to play all of these games offline, and there will be no ads or additional purchases in these games. You'll be able to share your Apple Arcade subscription with your Apple family (up to six members) at no additional charge. Apple Arcade will be available Fall 2019 in 150 countries and regions, but no pricing details have been released yet.

Earlier, the first new service Tim Cook introduced at the Apple special event was Apple News+. He said Apple News has become the number 1 news app. He then proceeded to say that magazines are coming to Apple News. This service is called Apple News+ , which will feature 300 magazines and will cost $9.99 per month (roughly Rs. 700) in the United States. You can share this with your Apple family (up to six devices) at no extra charge. Apple News+ is available starting today with a one-month free trial. It's launching in the US and Canada right now, but there is no word about an India launch. Apple News+ will come to Australia and UK later this year. One of its headline features is that Apple News+ doesn't allow advertisers to track you.

Apple Card with no late fees

The next big announcement from the Apple event 2019 moved to Apple Pay. This is Apple's payments service that lets you use your iPhone to make payments. This is being added to public transit in some cities in the US soon. Apple also launched a new payments service called Apple Card. You can sign up on your iPhone and start using this card in minutes, and can be used worldwide anywhere you can use Apple Pay.

Apple Card uses machine learning and Apple Maps to transform cryptic names on credit card statements to names and locations you will recognise, the company said. There are graphs and detailed analysis to see where and when you have been spending. Whenever you pay with your iPhone or Apple Watch, Apple Card will give you 2 percent of the amount as Daily Cash (instant rewards). Apple Card doesn't have any fees, no late fees either as the company claims it wants to make it easier to clear debts rather than land in a debt trap.

Apple Card's banking partner is Goldman Sachs and payments partner is MasterCard. Apple claims to use advanced security features for Apple Card, and that it focuses on your privacy as Apple doesn't know how much you paid for things and where you bought them. Goldman Sachs will have access to this data but it claims the company won't sell your data to third-parties. Apple Card also has a physical credit card with no card number, no CVV, no expiration date, or signature (for better security). The physical Apple Card works where Apple Pay is not accepted.