Releasing between mid-October through Christmas. 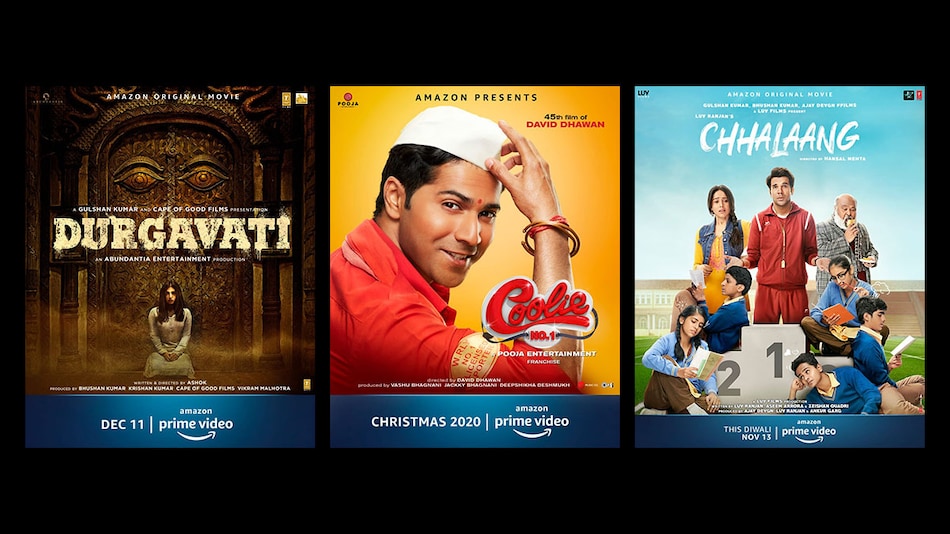 Those seven films join two we have already known about: the Malayalam-language comedy Halal Love Story (October 15) with Parvathy and Joju George, which will be followed by the Suriya-led Tamil-language action drama Soorarai Pottru (October 30). Except Coolie No. 1, all other eight acquisitions will carry the “Amazon Original Movie” branding. For Coolie No. 1, it is “Amazon Presents”, as was the case on Gulabo Sitabo and Shakuntala Devi.

Amazon's announcement of an extended film slate for Prime Video comes at an interesting time what with cinemas, except those in Maharashtra, allowed to open from October 15. This suggests that producers aren't sure that audiences will flock to theatres, with the coronavirus pandemic still raging across India — over 70,000 new cases are being reported daily, and around a thousand Indians are dying every day of COVID-19 — and consider straight-to-streaming to be a safer route to recoup their money.

Here's more on each title:

Coolie No. 1 is a remake of the 1995 eponymous film, with David Dhawan returning as director and installing his son David in the role originally played by Govinda. Coolie No. 1 also stars Paresh Rawal, Javed Jaffrey, Rajpal Yadav, Johnny Lever, Sahil Vaid, and Shikha Talsania. Rumi Jaffrey also returns as the writer. Coolie No. 1 is a production of Vashu Bhagnani-owned Pooja Entertainment, whose first ever production was the 1995 original. The remake was slated to release in May in theatres, but will now premiere December 25 on Prime Video.

Chhalaang has been directed by National Award-winner Hansal Mehta. Ajay Devgn is among the producers; Chhalaang is a production of T-Series Films, Luv Films, and Ajay Devgn FFilms. Rao and Bharuccha star alongside the likes of Saurabh Shukla and Mohammed Zeeshan Ayyub. Originally slated for a late January release, Chhalaang was delayed twice (first to March and then to June) before the pandemic struck. It will now release November 13 on Prime Video.

Durgavati is a remake of the 2018 Anushka Shetty-led Telugu-language Bhaagamathie, with the original director G. Ashok helming the Hindi-language adaptation as well. Akshay Kumar is one of the producers on Durgavati, which is a production of T-Series, Vikram Malhotra's Abundantia Entertainment, and Kumar's Cape of Good Films. Durgavati began filming back in January without a release date; it's now going straight to streaming December 11 on Prime Video.

Maara is a remake of the 2015 Malayalam-language Charlie with Dulquer Salmaan and Parvathy, which has previously been remade in Marathi in 2017 as Deva. Directed by Dhilip Kumar (Kalki), Maara also stars Shraddha Srinath, Sshivada, TSBK Moulee, Alexander Babu, and Minon John. Maara has been produced by Pramod Films' Prateek Chakravorty and Shruti Nallappa. Maara has been in the works for a while, having filmed in mid-2018 before being put on hold due to Madhavan's other commitments. It now opens December 17 on Prime Video.

Middle Class Melodies was announced in July without a release date. Vinod Anantoju makes his feature-length directorial debut with the Telugu film, and Deverakonda stars alongside Varsha Bollamma. Middle Class Melodies has been produced by Bhavya Creations' Venigalla Ananda Prasad. It will release November 20 on Prime Video.

That leaves Manne Number 13, directed by Vivy Kathiresan. Varsha Bollamma, Aiswarya Gowda, Praveen Prem, Chetan Gandharva, Ramana, and Sanjeiv are part of the cast. It is a production of Sri Swarnalatha Productions' Krishna Chaitanya. Manne Number 13 is out November 19 on Prime Video.

All nine Indian films will be available globally, Amazon said, in over 200 countries and territories.