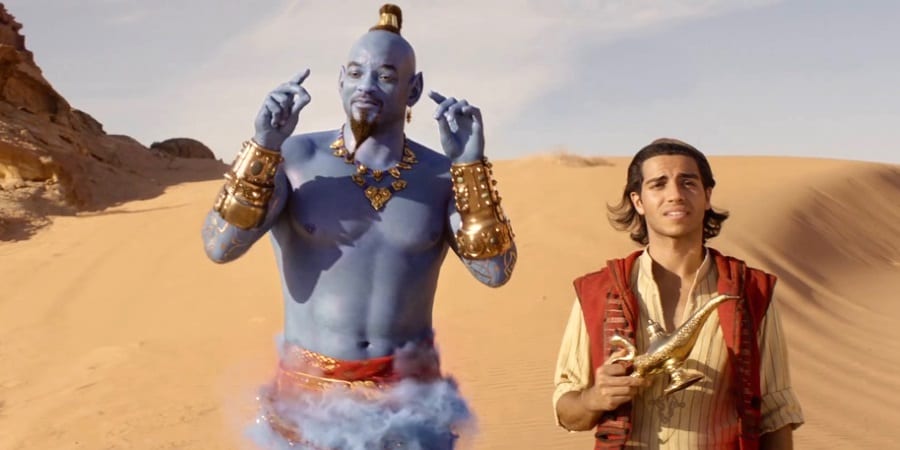 Will Smith as the Genie, Mena Massoud as Aladdin in the 2019 live-action remake

Disney has released the first full-length trailer for Aladdin, the live-action remake of its own 1992 hit animated film of the same name, from director Guy Ritchie (Sherlock Holmes). The film's previous look had met with severe backlash over the computer-generated look of Will Smith as the blue-coloured Genie, with users across social media having a field day generating memes and Photoshop edits. The new trailer can do little to offset the weirdness, but it does give us a peek at the banter between Smith and Mena Massoud (Jack Ryan), who plays the titular thief. Additionally, it recreates some iconic scenes and songs.

The new Aladdin trailer opens with, well, Aladdin (Massoud) evading a pursuit through the streets of Agrabah, the fictional Middle Eastern setting for the film, before there's a meet-cute of sorts with Princess Jasmine (Naomi Scott, from Power Rangers). We are then introduced to Jafar (Marwan Kenzari, from What Happened to Monday), the chief advisor to Agrabah's ruler — The Sultan (Navid Negabhan, from Homeland) — who claims that he can make Aladdin “rich, rich enough to impress a princess”. The task is simple: bring Jafar a lamp from the Cave of Wonders. Except we all know where the story goes from here.

In addition to the aforementioned cast, there are a couple of new characters in the live-action Aladdin remake in Nasim Pedrad (Saturday Night Live) as Dalia, a loyal handmaiden to Jasmine, and Billy Magnussen (Game Night) as Prince Anders, a potential suitor for Jasmine from the kingdom of Skånland.

Ritchie has claimed in the past that they have updated several aspects of the animated original to avoid “cultural inaccuracies and insensitivities”. While that can only be assessed once Aladdin is out, it's been controversial for other reasons already. Only a few actors playing Arab characters have Middle Eastern heritage — Massoud is Canadian-Egyptian, Kenzari is Tunisian-Dutch, and Pedrad is Iranian-American. The film has been accused of colourism for casting Scott, who is British-Indian.

In December, Disney's VP of multicultural engagement, Julie Ann Crommett offered a defence for the last of those, noting that Agrabah in the remake would be at the centre of the ancient Silk Road — which covers Middle East and South Asia — and that Jasmine's mother in the film isn't from Agrabah.

Disney has also been criticised for its decision to insert a wholly new white character in Price Anders, and its admission that it was darkening the skin of white extras, to allow them to “blend in”.

Alan Menken, who scored the 1992 original, returns as composer and has co-written new songs with La La Land duo Pasek & Paul. One of them is a new Jasmine solo, while the other is a new duet for Aladdin and Jasmine.

Flickr to Start Deleting Photos That Exceed the Free Account Limit Today: How to Save Your Photos
Realme U1, Realme 2 Pro to Receive Discounts During Realme 'Holi Days' Sale from Today