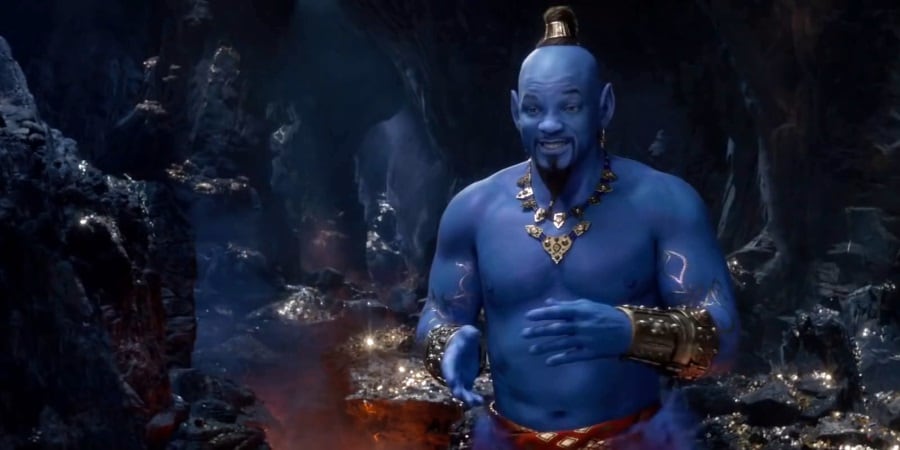 Will Smith as the Genie in the 2019 Aladdin movie

Disney released a new ‘special look' trailer for the live-action remake of its own 1992 animated hit Aladdin during the 2019 Grammys, giving fans their first proper look at what they had been asking for: Will Smith in his blue Genie avatar form. Unfortunately, seeing the Genie in a full-blown live-action version — that too with one of the most recognisable faces on the planet — is frankly, a bit weird. Smith looked fine as the Genie's human form when Disney unveiled first-look images from Aladdin, but there's definitely something a bit off here.

The new one-minute Aladdin trailer has glimpses of the desert surrounding Agrabah, the fictional Middle Eastern setting, Marwan Kenzari as Jafar asking Aladdin (Mena Massoud) to bring him the lamp, Aladdin and Abu the monkey entering the Cave of Wonders, a fancy procession moving through the Agrabah streets, Naomi Scott as Princess Jasmine walking down the palace steps followed by her pet tiger Rajah, and Aladdin rubbing the famed lamp that holds the Genie. Smith appears about 50 seconds into the new trailer, remarking: “You really don't know who I am? Genie, wishes, lamp... none of that ringing a bell?”

Directed by Guy Ritchie — best known for the Sherlock Holmes films, Lock, Stock and Two Smoking Barrels, and Snatch — the live-action Aladdin remake has updated several aspects of the animated original to avoid “cultural inaccuracies and insensitivities”, while running into controversies of its own making. Though the Genie isn't beholden to a particular race, only a few of the actors playing Arab characters have Middle Eastern heritage — Scott is British-Indian, Massoud is Canadian-Egyptian, Kenzari is Tunisian-Dutch, and Nasim Pedrad, who plays Jasmine's handmaiden Dalia, is Iranian-American.

Its decision to insert a wholly new white character in Billy Magnussen as Price Anders, a potential suitor for Jasmine from the fictional kingdom of Skånland, hasn't been well received either, and Disney admitted during filming that it was darkening the skin of white extras.