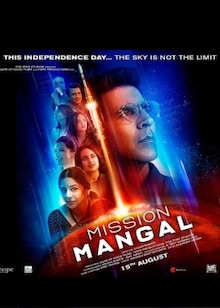 Mission Mangal is a 2019 history drama movie that is based on the launch of Mars Orbiter Mission (Mangalyaan) making it the least expensive project (lesser than the Hollywood movies budget) to planet Mars. The movie portrays a series of the true events held at the Indian Space Research Organisation (ISRO) for the successful launching of the Mars Orbiter Mission (Mangalyaan).

Mission Mangal starts with Tara Shinde (Vidya Balan) who is a regular working woman and a passionate scientist, who is trying to keep a balance between work and home at the same time. While on the other hand, Rakesh Dhawan (Akshay Kumar) is director of the Mission Mars who is handed over the Mars project after he fails the "Fat Boy". Rakesh and Tara come together with the idea they discovered from the 'puri-frying experience' and builts a layout of the project with all the planning to which Rupert Desai (Dalip Tahil), NASA Scientist shows his disagreement. Later, The Director of the Indian Space Research Organisation (ISRO) who was also an old friend of Dr. A. P. J. Abdul Kalam agrees to the plan and asks Rupert to lend Rakesh and Tara a team of experts. Rakesh instead receives a list of junior scientists and engineers from Rupert, who barely had experience in mission launches.

The list of other team members are (Taapsee Pannu) - Navigation Expert who is taking care of the navigation, Neha Siddiqui (Kirti Kulhari)- Spacecraft Autonomy Designer and Payload is taking care of the material of the satellite to make it durable but within a budget. Eka Gandhi (Sonakshi Sinha)- Propulsion Control Expert is an enthusiast who is asked to take care of the fuel and Varsha Pillai (Nithya Menen) - Satellite engineer is someone who has expertise in fitting the larger things in the smaller space. Parmeshwar Joshi (Sharman Joshi)- Payload Expert is someone who is looking after the cameras and lenses which shall help bring the pictures of Mars to the earth. Then there is Ananth Iyengar (H. G. Dattatreya)- Structural Engineer who will help assemble the space station.

The movie depicts the incidences which took place at NASA and how this team successfully made turn impossible into possible. Mission Mangal is helmed by the debutant director Jagan Shakti who has decided to make Mission Mangal his first Bollywood film. The movie starts with Vidya Balan who is a regular working women who is trying to keep a balance between work and home at the same time. She is a passionate scientist. While on the other hand, Akshay Kumar is handed over the Mar Mission project after his failure of the "Fat Boy". He and Vidya come together with the idea and builts a layout of the project with all the planning. In the movie, Taapsee Pannu is taking care of the navigation, Kriti Kulhari is taking care of the material of the satellite to make it durable but within a budget, Sonakshi Sinha is an enthusiast who is asked to take care of the fuel and Nithya Menon is someone who has an expertise in fitting the larger things in the smaller space. Not to forget, Sharman Joshi he is someone who is looking after the cameras and lenses which shall help bring the pictures of Mars to the earth.

The movie clearly shows how scientists get motivation from the day to day life and combine those ideas with physics to make a successful project. The movie is inspired by the true incident still has some Bollywood fiction into it to make it worth a watch. At times, if you lack patience you might find the movie stretching and boring in the first half. There's a lot more in the second half. The movie could have been crisper and comparatively shorter than current run time.

Step out of your house and watch Mission Mangal in your nearest cinema halls to see how much struggle, planning, time and patience are invested by the scientists to accomplish a project a make it a successful one. This movie will surely make you understand the real challenges which our scientists face at ISRO to bring pride to our nation. This Independence Day watches Mission Mangal with your entire family and also don't forget to give your ratings.

After the movie teaser of Mission Mangal, the much-awaited Mission Mangal trailer is now OUT. Scroll below to watch it right now.