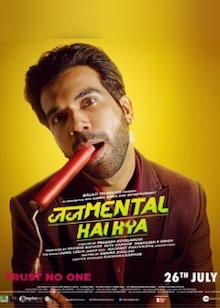 Judgemental Hai Kya is a new Bollywood psychological black comedy flick that revolves around two individuals who are different but the same at some point.

In Judgementall Hai Kya movie, Bobby Grewal (Kangana Ranaut) is dealing with a psychological disorder termed acute psychosis and associative identity disorder. She works as a voice artist and she loves her craft which can be seen in her behavioural traits where she becomes the character that she's playing while dubbing. She is messy, fierce and unapologetically different who has barely nice filters.

On the other hand Keshav (Rajkummar Rao) is a worthy sparing part who has an edgy persona. In the movie, Keshav will be seen unfolding various shades of his personality which Bobby keeps an eye on as she finds him always suspicious and not normal.

You can watch Judgementall Hai Kya movie online on Zee5 in HD video quality at the comfort of your home. Judgementall Hai Kya movie stars two ace Bollywood actors Kangana Ranaut and Rajkummar Rao who are known for delivering terrific performances. Kanika Dhillon's screenplay is perfectly directed by Prakash Kovelamudi. Kangana Ranaut as Bobby Grewal is dealing with a psychological disorder termed as acute psychosis and associative identity disorder. She works as a voice artist and she loves her craft which can be seen in her behavioural traits where she becomes the characters that she's playing while dubbing. She is messy and fierce. She is unapologetic different who has barely nice filters. Be it her abrupt manner or her sharp edges that are revealed in every sequence which you see her doing. She is just remarkable when it comes to acting skills.

Well not to forget Rajkummar Rao as Keshav. He is a worthy sparing part who has an edgy persona. Rajkummar leaves no stone unturned to show justice to the character. We'll not become the spoiler for you as you'd love to see Rajkummar Rao's unfold his performances. Other supporting actors like Jimmy Shergill, Amyra Dastur, Amrita Puri, Brijendra Kala, Satish Kaushik, Lalit Behl and Hussain Dalal has delivered their utmost support to the story of the movie. Watch this quirky, fierce and enticing movie which shall show you a different side of a psychological disorder.

The music of the film is composed by Arjuna Harjai, Tanishk Bagchi, Rachita Arora and Daniel B. George. The lyrics are written by Prakhar Varunendra, Tanishk Bagchi, Kumaar, Raja Kumari and Prakahar Vihaan. After "The Wakhra" song, "Para Para" song the new track "Kis Raste Hai Jana" is now out. Watch the song right now.