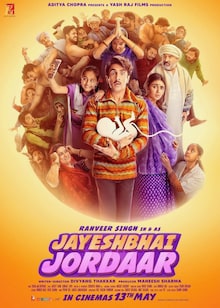 The feminist son (Ranveer Singh) of a patriarchal Gujarati couple (Boman Irani and Ratna Pathak Shah) takes off on a road trip with his pregnant wife Mudra (Shalini Pandey) after it’s revealed she’s going to have a second daughter.

With the police after them and everyone around them ready to snitch at a moment’s notice, how far will they get? Can Jayeshbhai usher those around him into the next millennia?