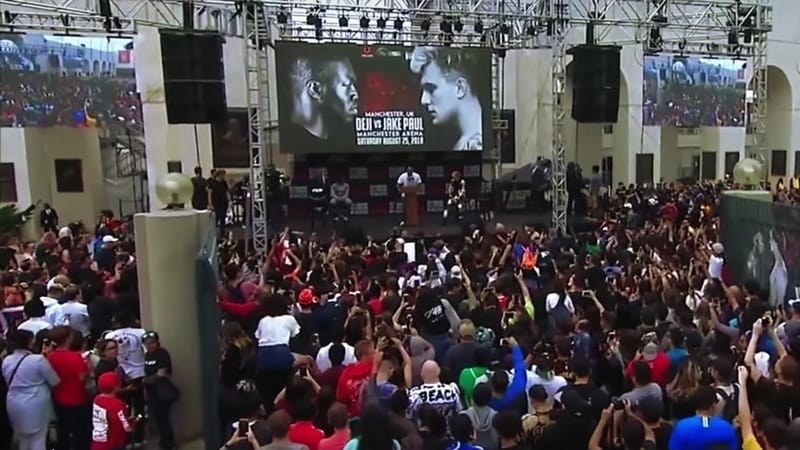 A boxing bout between YouTube celebrities Logan Paul and KSI has appalled aficionados of the noble art but left the two protagonists laughing all the way to the bank.

More than 15,000 fans crowded into Britain's Manchester Arena on Saturday to watch boxing novices Paul and KSI - real name Olatunji Olajide - clamber into the ring for a six-round contest.

A further 773,000 fans were reported to have paid $10 (roughly Rs. 700) each to watch a stream on YouTube, numbers that make it likely Paul and KSI stand to earn millions from a fight that ended in a "majority draw" for KSI.

With a further 1.2 million fans estimated to have watched the contest on pirated streams, a rematch between the two men, who have 37 million YouTube subscribers between them, is a question of when, not if.

The interest in the spectacle comes solely from Paul and KSI's outsized, and frequently obnoxious, Internet personas.

Paul, a video blogger, has regularly courted controversy since he rose to prominence on the Vine social media platform in 2012.

In December, he triggered outrage after uploading video to his YouTube channel showing the corpse of a young man at a notorious suicide spot in Japan.

He later posted an apology and pledged $1 million to suicide prevention charities.

'Joke, shambles, ridiculous'
But while there appears to be a clear demand to see Internet personalities bludgeoning each other inside the ropes, the traditional boxing world is so far keeping its distance from the niche market.

The British Boxing Board of Control refused to sanction Saturday's bout, noting that neither Paul nor KSI were licensed to fight.

"@IsaacDogboe made a successful first defence of his super bantam title with a 1st round demolition of the seriously tough Otake last night," Frampton wrote on Twitter.

"A proper champion who went on a world tour before he got his shot. But today people would rather talk about a couple of YouTube dick heads."

"They are not boxers and what's more they're not even poor imitations of boxers," Bunce said.

Boxing promoter Eddie Hearn said the Paul-KSI fight turned his stomach, even if he had a grudging admiration for the hype surrounding the contest.

"For me, I can't stand it. It makes my skin crawl, but as a business, I think it's genius," Hearn told thaboxingvoice.com.

"As a fight fan and pure boxing man, I can't stand it. But as a business model and a commercial project, I take my hat off to them."

Hearn, who manages world heavyweight champion Anthony Joshua, said neither Paul nor KSI had any chance of fighting as professionals.

"They couldn't go to any particular level as a pro, that's fact."