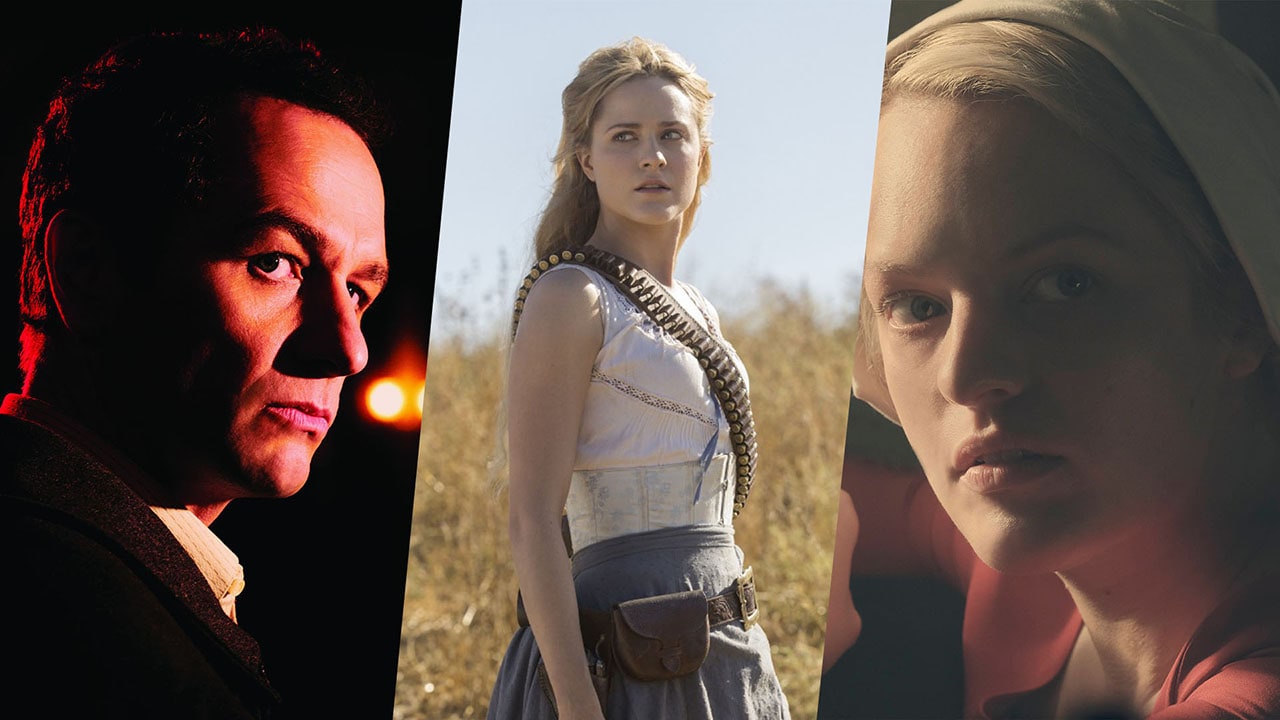 (L-R): The Americans, Westworld, and The Handmaid's Tale

The first three months of 2018 had many big names, from Star Trek: Discovery, to Jessica Jones most recently, but the quality wasn’t always there, certainly not what critics expected it to be. Those were still much, much better than some of the other stuff we were treated to: Altered Carbon, Krypton, Britannia, and Philip K. Dick’s Electric Dreams are best forgotten.

Thankfully, the abundance of television content these days – especially between April and June, owing to how the Emmys nomination system works – means we can just simply move on. The next three months include the return of award-winning shows (The Handmaid’s Tale), popular dramas that drive conversation (Westworld), and promising new stuff (Lost in Space).

Here are the spring 2018 TV shows to keep an eye out for:

The Americans
When: March 28
Where: FX, Hotstar

The critical darling returns for its sixth and final season, which jumps forward three years to 1987, and closer to the known downfall of the Soviet empire. The Jennings – Elizabeth (Keri Russell) and Philip (Matthew Rhys) – have problems of their own, including but not limited to the rising profile of their daughter Paige (Holly Taylor). Scott Cohen joins the cast for the shortened 10-episode season, which runs through the end of May.

A Series of Unfortunate Events
When: March 30
Where: Netflix

Based on Daniel Handler's popular Lemony Snicket children's novel series, the Netflix adaptation enters its second year, which covers books five through nine, and hence has a total of 10 episodes. Handler handles (excuse us) most of the writing, and Barry Sonnenfeld has directed some episodes as before. Guest stars include Nathan Fillion, Tony Hale, Lucy Punch, and Sara Rue.

A Series of Unfortunate Events Is the Same in Season 2, Which Is Both Good and Bad

Legion
When: April 3
Where: FX

Fargo creator Noah Hawley’s mind-bending X-Men story returns for its slightly longer 10-episode season two, which follows the Shadow King – now portrayed by Navid Negahban (Homeland) – searching for his original body after being forced out of David Haller’s (Dan Stevens) mind. Haller is meanwhile stuck in an orb, as his friends team up with government agency Division III to stop the parasitic villain.

Howards End
When: April 8
Where: Starz

E.M. Forster’s Edwardian-era novel gets a four-part adaptation from Manchester by the Sea director Kenneth Lonergan, starring Hayley Atwell (Agent Carter), Philippa Coulthard, Alex Lawther, Tracey Ullman, Matthew Macfadyen, Julia Ormond, and Joseph Quinn. Howards End was previously a critically-acclaimed 1992 film from Merchant-Ivory team, and the new mini-series has been praised in the UK, where it has already aired.

Fleabag creator Phoebe Waller-Bridge – who's also voicing a droid in Solo: A Star Wars Story – jumps from comedy to action-thriller with her new eight-episode series, Killing Eve, based on the Villanelle novels by British author Luke Jennings. It follows a desk-bound MI5 agent named Eve (Sandra Oh) who is bored with her job, and is pitted against a female assassin with the codename Villanelle (Jodie Comer).

The Expanse
When: April 11
Where: Syfy

Following on from its second-season finale, Earth, Mars, and The Belt are at war in The Expanse season 3, which is based on the second half of Caliban’s War, and the third novel Abaddon’s Gate in the eponymous series from James S.A. Corey, the pen name of authors Daniel Abraham and Ty Franck. New cast members for this season include Elizabeth Mitchell and David Strathairn.

Lost in Space
When: April 13
Where: Netflix

Irwin Allen’s 1960s sci-fi series gets a modern-day remake at Netflix that takes places three decades into the future, where space colonisation is the new thing. When the Robinsons’ spaceship veers off course and crash lands on an unknown planet, they must figure out how to survive. The original series’ Robot has been given a dramatic makeover, and Lost in Space stars the likes of Toby Stephens (Die Another Day) and Molly Parker (House of Cards).

Westworld
When: April 22
Where: HBO, Hotstar

The show that gave birth to dozens of fan theories returns after a gap of 16 months with its second season, which will introduce a second world, the samurai-themed Shogun World, with a promise of four more in the future. Joining the android-hosts vs humans-guests battle that involves Evan Rachel Wood, Thandie Newton, James Marsden, and Jeffrey Wright are new cast members in Hiroyuki Sanada, Peter Mullan, Katja Herbers, Gustaf Skarsgard, and Fares Fares.

Archer
When: April 25
Where: FXX

The series described as James Bond meets Arrested Development by its creator Adam Reed returns for a ninth season, called Archer Danger Island, which still takes place inside the titular spy’s unconscious mind. He’s now a seaplane pilot during World War II, serving in the South Pacific in 1939, alongside Pam as his co-pilot and loyal sidekick. Archer’s mom is a bar owner, Cheryl is an heiress named Charlotte, Cyril becomes a Nazi officer, and Dr. Krieger voices a parrot? It’s Archer.

The Handmaid’s Tale
When: April 25
Where: Hulu

The Emmy and Golden Globe-winning series, and one of our 2017 favourites, returns for a longer 13-episode second season that will go beyond the book, including the Colonies. Alexis Bledel, who plays Emily, gets upgraded to main cast status. New cast members for The Handmaid’s Tale season two include Bradley Whitford as the architect of Gilead’s economy, and Sydney Sweeney as an obedient girl who longs to be a Commander’s wife. Cherry Jones, Clea DuVall, and Marisa Tomei (in one episode) will guest star.

Sweetbitter
When: May 6
Where: Starz

Stephanie Danler brings her first published book of the same name, about life as a waitress in the high-end dining world of New York City, to the screen as a six-episode, half-hour drama series. Ella Purnell (Miss Peregrine's Home for Peculiar Children) stars as the waitress Tess, who packs her bags at 21 and moves from Ohio to New York. Caitlin FitzGerald, Paul Sparks, Tom Sturridge, and Evan Jonigkeit are also part of the cast.

Patrick Melrose
When: May 12
Where: Showtime

Benedict Cumberbatch returns to television for this five-episode series – a co-production between Showtime and Sky Atlantic – that is based on the five semi-autobiographical novels by Edward St. Aubyn, in which he’ll play a drunken playboy attempting to overcome a traumatic childhood. Jennifer Jason Leigh, Hugo Weaving, Blythe Danner, Allison Williams, and Holliday Grainger also star.

Michael B. Jordan (Black Panther), Michael Shannon (The Shape of Water), and Sofia Boutella (Star Trek Beyond) lead HBO’s feature-length adaptation of Ray Bradbury’s classic dystopian novel, where books are outlawed and firemen do what their title says: set things (books in this case) on fire. Jordan plays the protagonist Guy Montag, Shannon is his boss Captain Beatty, and Boutella is Clarisse, who meets Montag and develops an interest in his work. Ramin Bahrani (99 Homes) is co-writer and director.

Unbreakable Kimmy Schmidt
When: May 30
Where: Netflix

Unbreakable Kimmy Schmidt is taking a new approach to its fourth season: six episodes will air May 30, and the rest of the season (likely seven more episodes) will air later in the year. Kimmy will be working at her former student Zach’s start-up that she joined in the season finale last year, but that’s all we know for now. Tituss Burgess, Carol Kane, and Jane Krakowski will all return.

Looking ahead to this year’s summer, there are very few concrete announcements so far. We’ll have a detailed round-up in June, this is all for now:

Mobileye Says Its Software Would Have Seen Pedestrian in Uber Fatality