Westworld, God of War, and More – The Weekend Chill 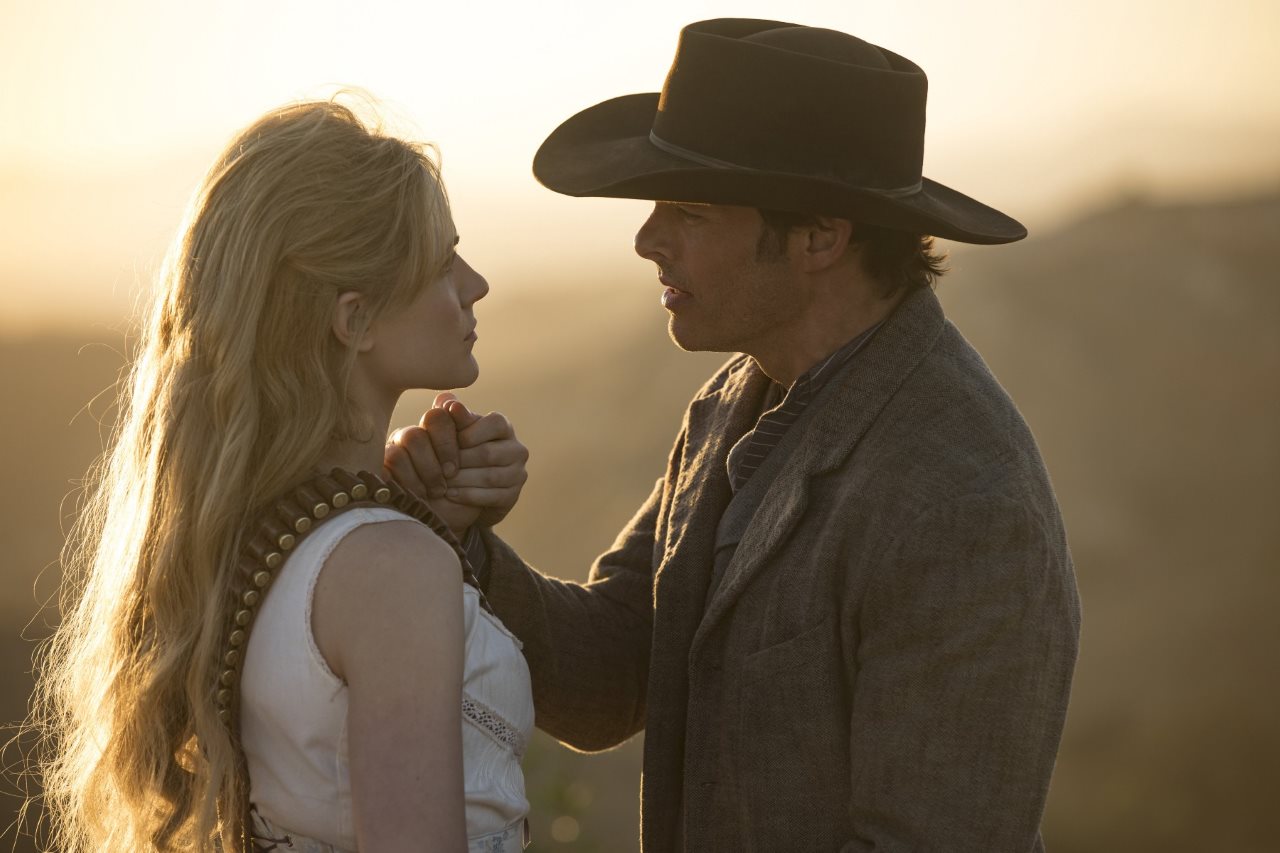 Last Friday, Disney released the first trailer for Incredibles 2, which is out June 15. Later that day, Deadline reported that Gabriel Luna will play the new Terminator in the sequel due next year, which has Tim Miller (Deadpool) as director and James Cameron as producer.

On Monday, Avengers: Infinity War co-director Joe Russo revealed in an interview that Carrie Coon (The Leftovers, Fargo) plays Proxima Midnight, one of the members of the Black Order, Thanos’ henchmen and adopted children. On Tuesday, Variety revealed the title of How to Train Your Dragon 3 - it’s called The Hidden World, and will release in March 2019.

Also that day, Deadline brought word that Warner Bros. had hired Cathy Yan to helm a DC movie with Harley Quinn (Margot Robbie) in the lead. It’s based on Birds of Prey and not Gotham City Sirens, though a Variety reporter claims there are two scripts currently in the works, with Quinn and Barbara Gordon being the only common elements to both.

Lastly on Tuesday, Warner Bros. announced that Steven Spielberg will produce and likely direct a DC Comics property: Blackhawk, about a squadron of pilots in World War II who fought the Nazis. David Koepp is working on the script. On Wednesday, we got the final trailer for Jurassic World: Fallen Kingdom, which is out June 22, followed by the final trailer for Deadpool 2 on Thursday. Deadpool 2 will release May 18.

Also on Thursday, Variety reported that David Leitch (Atomic Blonde, Deadpool 2) had signed on to direct an adaptation of Tom Clancy’s The Division, the Ubisoft video game set in the aftermath of a biological terrorist attack. Jake Gyllenhaal and Jessica Chastain are already signed onto the film.

TV:
Westworld
After a gap of sixteen months since the season one finale, Westworld – the HBO sci-fi series created by husband-wife duo Jonathan Nolan and Lisa Joy, inspired by Michael Crichton’s 1973 film of the same name – is back on Sunday (Monday for those of us in India). The show will pick up where it left off with the android-hosts turning on their human masters, just as the park’s co-founder Robert Ford (Anthony Hopkins) wanted.

Westworld’s second season adds almost a dozen new cast members, with Peter Mullan (My Name Is Joe), Katja Herbers (Manhattan) and Rinko Kikuchi (Pacific Rim) among them. Mullan plays Delos Corp founder James Delos, Herbers plays a seasoned guest whose role grows in importance midway through the season, and Kikuchi plays a geisha in Shogun World, one of the new theme parks that Nolan and Joy have talked about.

Having seen half of the new season, we felt it was the ensemble’s strength – Jeffrey Wright, Evan Rachel Wood, and Thandie Newton notably – that makes Westworld so engaging, while Shogun World brings a new flavour to Westworld. There are multiple episodes that run over an hour though, and still manage to not find time for its primary characters.

How to access: HBO or Hotstar
Time commitment: 1 hour, weekly

Movies:
The Post
The Post – set in the early 1970s – marks the first time Meryl Streep, Tom Hanks and Steven Spielberg have collaborated on a project. It looks at the unlikely partnership between The Washington Post’s publisher (Streep) and editor (Hanks) as they expose a massive cover-up of government secrets that spanned four US Presidents.

That cover-up is now known as the Pentagon Papers, which revealed that the US had secretly expanded its Vietnam War actions without informing the public or the Congress. The film’s cast includes Alison Brie, Bob Odenkirk, Carrie Coon, David Cross, Jesse Plemons, Matthew Rhys, Sarah Paulson, and Zach Woods.

The Post was named as one of the best films of 2017 by various publications and film organisations, praising the work of Streep, Hanks, and Odenkirk, and noting its comparisons of the Nixon and Trump administrations. It was nominated for Best Picture at the Oscars and six Golden Globes but didn’t win any.

How to access: Amazon US, Amazon Video US, Google Play US, iTunes US, or Microsoft Store US
Time commitment: 1 hour and 56 minutes

Other mentions:
This week, Netflix added the third season of Fargo, from Legion creator Noah Hawley, which stars Ewan McGregor (Star Wars) in a dual role, Mary Elizabeth Winstead (10 Cloverfield Lane), Carrie Coon (The Leftovers), and David Thewlis (Harry Potter). Other notable additions include all three seasons of Hannibal, and the two brilliant Monty Python films: The Holy Grail, and Life of Brian. Check out our April guide for more options.

Video games:
God of War
A reimagining of PlayStation’s flagship brand takes Kratos into the Norse mythology, having left behind the days of vengeance against the Greek gods. He now has a son named Atreus, whom he teaches how to survive in the harsh world, while reflecting on the dark lineage he’s passed on and how he can make amends for his past shortcomings.

With gameplay completely rebuilt from scratch – Kratos drops his double-chained blades for a magical battle axe Leviathan – the new God of War also brings in gameplay elements from RPGs, such as knowledge points and a Rage meter that fills during combat. Atreus can also help during gameplay, being better at puzzles while his father does the heavy-lifting.

Critics are loving God of War, having made it the highest-rated game of 2018 as of now. That includes us: we gave it a 10 out of 10 in our review. Praising the combat, narrative, and the setting, Gadgets 360’s Rishi Alwani concluded: “Kratos’ PS4 debut is a god tier affair. [It’s] rare to see a reimagining to a series handled as deftly and with such polish and care.”

Yakuza 6: The Song of Life
It’s a fantastic week for PlayStation. Following on the success of Yakuza 5 and Yakuza 0, Sega has another chapter in the life of Kazuma Kiryu to offer. Choosing to serve a three-year prison sentence instead of resisting it, an older and weathered Kiryu gets out and finds his surrogate daughter Haruka has gone missing from the orphanage. He finds her in a coma and must look after a baby she gave birth to.

Unlike Yakuza 5, Kiryu is the only playable character in Yakuza 6: The Song of Life, and it’s his swansong. The game retains its open-world nature and third-person camera, plus the over-the-top combat players have to come to expect from the franchise. The game is mostly set in Onomichi, a sleepy seaside town in Hiroshima Prefecture, and Tokyo’s red-light district Kamurocho.

Yakuza 6 has been heavily praised. It got a 9 out of 10 in our review, noting its fantastic story, memorable cast, solid combat, and the plenty mini-games as the highlights. And don’t worry about the ‘6’ moniker, you don’t need to play the previous six games to acquaint yourself. The game does that for you via a lengthy flashback sequence.

Music:
The Lookout by Laura Veirs
Two years on since her collaborative effort with Neko Case and k.d. lang titled case/lang/veirs, on which she was lead songwriter, the 44-year-old folk/alt-country Veirs is back with her tenth solo album, featuring contributions from Oscar-nominated Sufjan Stevens and My Morning Jacket frontman Jim James, and produced as always by her husband Tucker Martine.

The Lookout has been well-received by critics. Writing for The Observer, Phil Mongredien said there’s “a dreamlike quality to it” and added: “Veirs’s 10th solo album is perhaps her most satisfying yet, the deceptively simple songs sketched out on acoustic guitar or piano (the lovely The Meadow is particularly minimalist) and subtly embellished by her band and producer husband.”

NME’s Thea de Gallier termed it comforting, bittersweet, and “a quietly optimistic manifesto” before remarking: “Her description of the subject matter suggests it could stray into uncharacteristically bleak territory, but instead, it sounds and feels like the glowing embers of a campfire at twilight, or a contemplative gaze across unspoilt countryside while remembering the madness of the city.”