It premieres January 15 on Disney+ and Disney+ Hotstar. 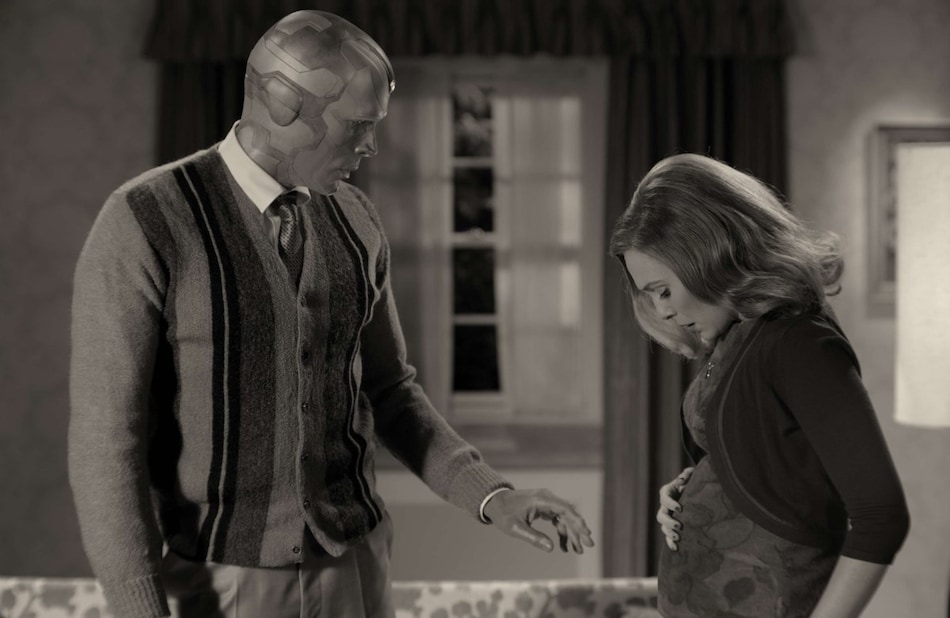 With WandaVision — premiering January 15 on Disney+ and Disney+ Hotstar — the Marvel Cinematic Universe embraces a format it's never tackled before: a sitcom. Though it's technically set after the events of Avengers: Endgame, many of WandaVision's onscreen events are depicted in the style and look of American sitcoms from the ‘50s, ‘60s, ‘70s, and beyond. Think I Love Lucy, The Dick Van Dyke Show, Family Ties, or Full House (which had WandaVision star Elizabeth Olsen's sisters Mary-Kate and Ashley). Why is it like this? That would naturally be a spoiler, but the WandaVision cast and creators want you to know that it all comes from a place of love.

Everything You Need to Know About WandaVision

“I watched too much TV as a kid, and TV meant a lot to me and I found comfort in television families,” Marvel Studios president Kevin Feige said Sunday over Zoom in a virtual event for WandaVision. “The one thing we talked about early on is: these are not parodies. This is not direct satire. We love these [family sitcoms] and they meant a lot to us, dated and silly as they may seem now. There's a comfort factor there. And so that was the primary factor behind, and the comic inspiration, of course, [in] what led us to putting these ideas together.”

Olsen noted she drew off the work of Mary Tyler Moore (of The Mary Tyler Moore Show, and The Dick Van Dyke Show) and Elizabeth Montgomery (of Bewitched fame) to craft her performance, and “accidentally threw in some Lucy in the ‘70s [episode] just because there was so much physical comedy.”

True to sitcoms from that era, the first WandaVision episode was filmed in front of a live audience. Olsen said: “It was so nerve wracking. There was a lot of adrenaline, there were a lot of quick changes, and it totally confused my brain, the idea of not playing to an audience, but feeding off an audience and having a camera. I was really grateful when we added the fourth wall.”

“Doing it in front of this live studio audience, which is this quasi-theatre-TV thing, it really adds to it,” WandaVision director Matt Shakman — he helmed all nine episodes of the Marvel miniseries — said. He screened “a ton of old television episodes” prior to filming for the cast and crew. After viewing, they would discuss how comedy was changing across the decades. They also hired coaches to teach actors how people sounded and moved in that era to “make it as authentic as possible”.

Shakman and Feige even had lunch with Dick Van Dyke himself to further help in that regard. Shakman said: “You watch The Dick Van Dyke Show today, and it's just as good as it was back then. So what's the magic behind that? And I remember, Kevin and I had this amazing lunch with Dick Van Dyke that remains one of the great afternoons of my life. And we asked him you know what was the sort of governing principle behind The Dick Van Dyke Show. Why did it work so well? And he said, if it couldn't happen in real life, it can't happen on the show, right. So if you're doing something that's grounded, it's real, and it's resonated with everyone's experience at home, you can do crazy things.”

Marvel in the fifties

Of course, WandaVision isn't just a sitcom. The two trailers we've gotten have strongly hinted that the Marvel series' suburban American setting is a construct of sorts, one that has either been created by Wanda Maximoff/ Scarlet Witch (Olsen) or one that she's trapped within. There's ample evidence to support this. For one, [spoilers for a two-and-a-half-year movie] Vision (Paul Bettany) is dead. He was killed by Wanda and Thanos in Avengers: Infinity War. Then we have the returning now Dr. Darcy Lewis (Kat Dennings), previously assistant to astrophysicist Jane Foster (Natalie Portman) and now an expert herself, Shakman revealed.

For that tonal shift — from comedic to dramatic — the WandaVision creators looked to a classic series that explored mysterious beings and strange happenings in suburban American settings: The Twilight Zone. Shakman said they drew inspiration from Rod Serling's late ‘50s creation in terms of shooting and the look of it.

Skip this box if you wish to avoid potential spoilers for WandaVision.

Every episode of WandaVision features a fake commercial that makes references to the larger MCU. Many of them involve Hydra, the evil organisation that served as the primary villain in Captain America: The Winter Soldier. Naturally, the WandaVision creators wouldn't reveal what they are about, but Feige did say this: “In regards to how other truths of the show are beginning to leak out, commercials were an early idea for that. If this is the very first MCU thing you're watching, it's just a strange version of a ‘50s or ‘60s commercial that you'll have to keep watching the series to understand. If you have been watching all the movies, you might be able to start connecting what those things mean to the past.”

WandaVision creator and head writer Jac Schaeffer added: “Twilight Zone is an enormous influence on me personally, I really think that's actually kind of how I learned to tell stories. And it was so incredibly deft at that turn. You think you're in one sort of thing and then suddenly it's flipped on its head. And so we were all incredibly enamoured of that.

“And then I think there are a lot of current shows right now, like prestige series that are doing this very exciting thing where you watch a couple episodes and you think the show is one thing, and then by episode four or five, it flips the script. So that's really, I think, where the more contemporary references come in, in terms of kind of boundary pushing in genre.”

More of Wanda and Vision — and beyond

At the same time, WandaVision gives Marvel fans a lot more time with its leads, whose appearances had been limited to Avengers movies for the most part. Wanda was first seen in a post-credits scene attached to Captain America: The Winter Soldier and then made her full debut alongside Vision in Avengers: Age of Ultron. Both returned in Captain America: Civil War, an Avengers film all but in name, and were part of the mega get-together Avengers: Infinity War. Put together, they have had several minutes of MCU screen time. In WandaVision, they will get several hours.

“Wanda and Vision, as a couple, their love story has been so very tragic but also really kind of warm and intimate,” Schaeffer said. “We've seen them in these really beautiful kind of stolen moments in the MCU. It's actually been a small amount of screen time but very powerful and very soulful.

“But what we have with WandaVision is really, I think, a treat for all is we're sort of opening up the stage and the space for them. And they're in this like domestic sphere, and we get to see them doing dishes, in the kitchen, and being cute. Just all this sort of like homebody stuff that you would never get to see a superhero participate in. We really go from these enormous dramatic moments and kind of fraught moments in the MCU and then in WandaVision, it's a lot of cute-cute until it's not.”

Thanks to the extended runtime, WandaVision will also have room to explore other characters. Top of the list is Monica Rambeau (Teyonah Parris), a grown-up version of the 11-year-girl from Captain Marvel who chose the title character's (Brie Larson) signature red-and-blue costume colours. Parris' Monica will also be part of Captain Marvel 2 alongside Carol Danvers / Captain Marvel (Larson) and Kamala Khan / Ms. Marvel (Iman Vellani). Parris' comments hint that WandaVision might even have flashbacks to her past.

Parris said: “In WandaVision, we pick up with who [Monica] is now as a grown woman, and through the course of the show, we find out what she's been up to, what's happened for her. Between that gap in the years, and how she's grown and evolved or… not. […] We actually get to learn what those things are that Monica has seen and gone through, and how they have shaped her life. I don't want to give too much away because we will actually touch a lot on that through the course of the show.”

After an eight-month delay caused by the pandemic, WandaVision will kick off the belated Phase Four of the MCU. (Black Widow was originally slated to do so, but it's now delayed to May 7.) It's unlike anything Marvel has done, which holds both promise and cause for concern.

Feige said: “I hope it says, ‘Get ready for the new and the different.' […] With the Disney+ opportunities, it has allowed us to creatively expand what we do. Yes, the original plan was The Falcon and the Winter Soldier was going to debut first last year, followed very soon behind with WandaVision. Creatively, we didn't reshuffle. Part of having a long lead plan is having the ability and the ideas of how to shuffle, should the need arise. I'm not saying we were prepped for a global pandemic. We were not.

“But the unexpected has often served Marvel Studios well, and it has served us well in this case. Because [WandaVision] being our first one, I love how bold it is, I love how different is, and I love it is something you can only see on a Disney+. We have things that you will only be able to see initially in theatres, we have things that are made for that. And this is very much made to be seen, week after week on television, which is very different for us.”