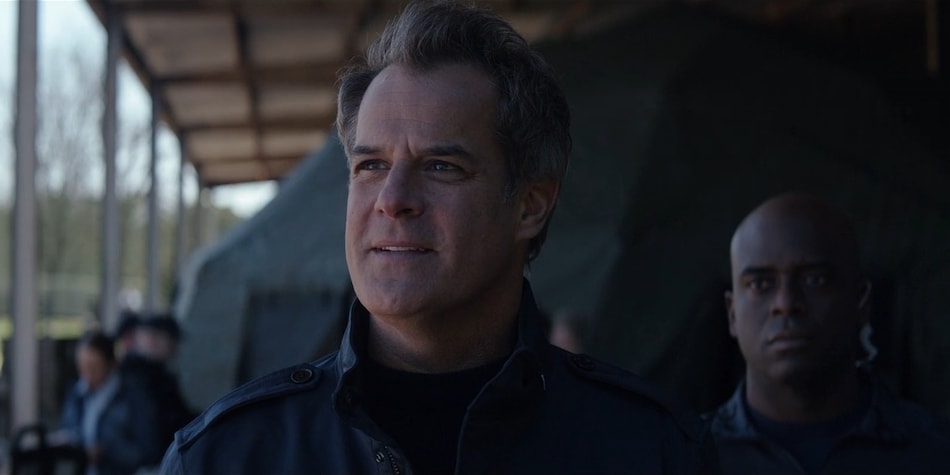 WandaVision didn't have a single post-credits scene in its first six episodes, and now it's gotten them back-to-back. WandaVision episode 8 features a scene during the credits, just like the one we had on WandaVision episode 7 last week. And it's a much more important one as it introduces what seems to be WandaVision's second major villain. The first, of course, is Agatha (All Along) Harkness (Kathryn Hahn) who revealed her true self at the end of WandaVision episode 7. With two villains potentially now in the mix, Wanda Maximoff (Elizabeth Olsen) has her work cut out as we head into the Marvel Cinematic Universe series' finale, WandaVision episode 9, next week.

Spoilers ahead for WandaVision episode 8 “Previously On”.

Outside the [Westview] Hex, S.W.O.R.D.'s acting director Tyler Hayward (Josh Stamberg) is getting ready to launch something, though WandaVision episode 7 never gets back to him for the rest of the episode. This is clearly a table-setting move for the remaining episodes.

That's exactly the case, as this WandaVision episode 7 scene purely existed as a tease for a future moment, which ends up being the post-credits scene in WandaVision 8. Marvel could have easily taken it out as well, and honestly, it wouldn't have impacted the MCU series at all.

A couple of minutes into the credits, WandaVision episode 8 take us back to New Jersey, with Hayward looking out at the strengthened red-pulsating border of the Hex. A SWORD officer walks up to Hayward and informs him that they are “ready for launch”. This is a direct reference to Hayward's remarks about preparing to launch something. Hayward replies: “It's about time.”

Hayward turns around and heads into a tent, where he says to another SWORD officer: “We took this thing apart and put it back together again a million times. Tried every type of power supply under the sun, when all we needed was a little energy directly from the source.”

WandaVision episode 8 post-credits scene cuts to show the 1980s Stark Industries drone that Monica Rambeau (Teyonah Parris) had sent into the Westview Hex back in WandaVision episode 5, unaware that Hayward and Co. had weaponised it. Wanda had made it malfunction using her magic, before walking out of the Hex and throwing it in SWORD's faces. That's worked out well for Hayward, as the latent magic has come to their aid.

Hayward then nods his head, signalling to his deputy to power the “thing” up. The thing, as it turns out, is Vision (Paul Bettany). He's blue, or is that just the lighting? It seems to be the lighting, as that means we have a white Vision on our hands, who has a bit of history in the comics.

The short version: Vision's silver and purple colours are a choice, he's an android made out of vibranium after all. So when SWORD decides to take him “apart and put him back together again a million times”, a part of Vision is naturally going to be lost in the process — leaving this reanimated corpse a colourless android that purely exists as a weapon.

The post-credits scene in WandaVision episode 8 also confirms what actually happened to Vision's body. In WandaVision episode 5, Hayward claimed that Wanda stole it from their headquarters — he cleverly edited the CCTV footage to make his case — and brought him back to life. That would violate Vision's will and Sokovia Accords, which Hayward uses to accuse Wanda and paint her as the enemy.

But as it turns out, Hayward has been lying all along. Darcy Lewis (Kat Dennings) was the first to catch onto Hayward's plans when she cracked into his systems and found that Hayward had been tracking Vision inside the Hex.

It's not Wanda but SWORD that has been violating Vision's will and the Sokovia Accords. They have been trying to bring him back online. As Hayward notes during WandaVision episode 8, Vision is a $3 billion asset and the most sentient weapon ever made. Hayward and Co. don't see Vision as a person, just a “thing” they can use for their purposes.

And now he's online and ready. Is there any of the original Vision left in him? I doubt it. Will Wanda have to kill Vision for a second time? Well at least this time, she has another Vision on her side. Something tells me this will be a heart-wrenching tragic moment. Maybe the Westview Vision will sacrifice himself to take down White Vision? Or could their fates be intertwined? We'll no doubt get our answers in the WandaVision series finale.