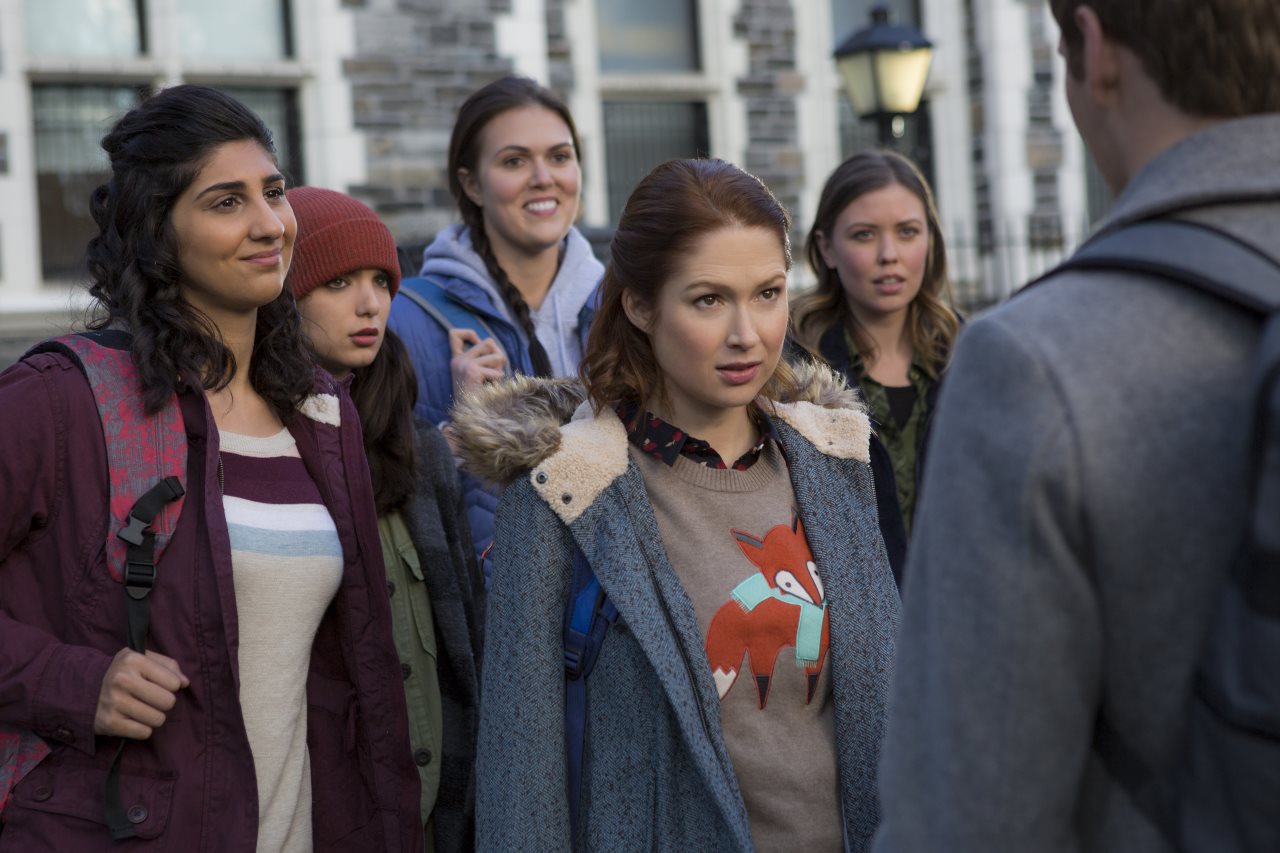 Over the last weekend, George RR Martin – the author behind A Song of Ice and Fire, which has been adapted into HBO’s Game of Thrones – took to his blog to clarify that five spin-off prequel shows are currently in development. And yes, he’s still working on the next novel.

After Legion on FX, Fox has a new X-Men series on the way called The Gifted, which received a first trailer on Monday. It’s got misunderstood mutant teens and powerful people chasing them. Burn Notice’s Matt Nix created the series, with X-Men veteran Bryan Singer directing the pilot. It’ll air sometime in Autumn this year.

Fox released a trailer for another upcoming series on Monday, The Orville. Created and starring Seth MacFarlane, the hour-long sci-fi comedy will be Star Trek satire in the form of a workplace comedy. It too will arrive in Autumn.

Wonder Woman is still a few weeks out, but Warner Bros is already planning a sequel, said director Zack Snyder at an event in Shanghai. However, the next DC female superhero film will be Joss Whedon’s Batgirl, with Wonder Woman 2 to come later. You’ll obviously get to see her later this year as well, in Justice League in November.

On Wednesday, a Polish studio revealed that Netflix had signed on to develop and produce a TV series based on The Witcher, the series of novels by Andrzej Sapkowski, which spawned the award-winning game series of the same title.

Later that day, star Jason Bateman and showrunner Mitchell Hurwitz confirmed that Netflix had greenlit a fifth season of Arrested Development, the comedy about a dysfunctional family. Expect it sometime next year.

And then, CBS released the first trailer for Star Trek: Discovery, which marks the return of the long-running and popular franchise to its TV roots. It’ll be available on CBS All Access in the US, and on Netflix around the world later this year.

On Thursday, Netflix’s Cannes-entry Okja – from Snowpiercer director Bong Joon-ho – got a full-length trailer, which involves a young girl trying to save her monster friend from a greedy corporation. After premiering at Cannes later this month, the film hits Netflix on June 28.

TV:
Unbreakable Kimmy Schmidt
Created by Tina Fey and Robert Carlock – the latter of whom served as showrunner for the former’s previous comedy 30 Rock – for Netflix, Unbreakable Kimmy Schmidt follows Kimmy, a woman in her thirties, who was rescued along with three others from a doomsday cult in Indiana, where Reverend Richard Wayne Gary Wayne (Jon Hamm) had held them for 15 years.

After getting out, Kimmy decides to move to New York City, where she meets gay, struggling actor, Titus Andromedon (Tituss Burgess), and street-wise landlady Lillian Kaushtupper (Carol Kane), and gets a job as a nanny for high-strung and lonely socialite Jacqueline Voorhees (Jane Krakowski). During the first season, the three help reintroduce Kimmy to modern life, which served as the butt of many jokes.

In the show’s second season, Kimmy does odd jobs, and Jacqueline embraces her Native American heritage, while Titus and Lillian find new partners. The season finale ended with a big reveal [spoiler alert], with The Reverend calling from prison to tell Kimmy they need a divorce. Kimmy goes to college in the third season, available Friday, which has been praised in early reviews.

The Keepers
After the success of podcast Serial, and Netflix true crime series Making a Murderer, director Ryan White (The Case Against 8, Good Ol’ Freda) brings The Keepers, a seven-part documentary series that looks at the unsolved murder of a Baltimore nun, and its consequences on society that still remain nearly five decades after.

The person at the centre is Sister Cathy Cesnik, a nun and Catholic high school teacher, who went missing on November 7, 1969. Her body was found two months later, but the case soon disappeared from the spotlight. It returned to media attention in the 90s, when one of her former students – known to the public as ‘Jane Doe’ – opened about her experience of sexual abuse, and how she had been shown Cathy’s then-undiscovered body.

With no one convicted, and the story lapsing into the background, White and his crew sat down with Cathy’s friends, relatives, journalists, elected officials, and concerned Baltimore citizens to put the pieces together, and paint a picture of clergy abuse, and government institutions failing the people.

Movies:
Dheepan
Winner of the Palme d’Or at the 2015 Cannes Film Festival, Dheepan was co-written and directed by Jacques Audiard (The Beat That My Heart Skipped, A Prophet), who was partly inspired by Montesquieu’s Persian Letters, and Sam Peckinpah's 1971 thriller Straw Dogs. Audiard was interested in exploring an overlooked community, so he decided to focus on Tamil immigrants.

The film follows a Tamil Tiger soldier (Antonythasan Jesuthasan) who decides to seek political asylum in France after losing in the Sri Lankan Civil War. To do so, he is handed a dead man’s passport – Dheepan – and paired with a strange woman and a young girl, to make them appear as a family. When they arrive in France, Dheepan gets a job as a caretaker.

Soon, they realise they are living in a rough neighbourhood controlled by drug dealers, and Dheepan must draw on his earlier principles to survive, and care for his new family.

How to access: Netflix
Time commitment: 1 hour and 54 minutes

The Salesman
Winner of this year’s Best Foreign Language Film award at the Oscars, Iranian writer-director Asghar Farhadi chose not to attend the ceremony in protest of President Trump’s “Muslim ban”. It was his second win at the Oscars, after A Separation picked up the same award in 2011. The film also picked up two awards at the Cannes, and was part of Mumbai Film Festival, as well.

Critics haven’t showered the same amount of praise on Farhadi’s latest work, though, putting it a step below his previous films. The Salesman takes its name from Arthur Miller’s play Death of a Salesman, which is performed by a young married couple – Emad (Shahab Hosseini), and Rana (Taraneh Alidoosti) – the story follows.

Forced to move into a new apartment after their old flat becomes damaged, an incident linked to the previous tenant dramatically changes their life, and their relationship. The film’s Blu-ray, now available, also comes with an interview with Farhadi.

How to access: Amazon Prime Video, or Amazon US
Time commitment: 2 hours and 5 minutes

Other mentions:
Technically not part of the weekend, the season finales of The Flash, and Arrow will air mid-week on Colors Infinity – Wednesday and Thursday 7pm, respectively.

Video games:
Injustice 2
Sequel to 2013’s Injustice: Gods Among Us, developer NetherRealm Studios returns to the franchise it started with Injustice 2, without any subtitle this time around. The core gameplay remains the same, with some minor adjustments to game mechanics. There’s a new feature called the Gear System, a form of loot drop that gives players items for visual customisation, and modifying abilities and stats.

Unfortunately, the new loot system hasn’t been well received (we called it “pointless”) nor have been the included microtransactions. Fortunately, it has an entertaining story, great presentation, a lot of variety in game modes, and the tweaks to the game mechanics work well. And thanks to publisher Warner Bros, which holds all licenses for DC characters, Injustice 2 can call upon all your favourite characters.

That includes everyone from Aquaman, Black Canary, Catwoman, Darkseid, Joker, Poison Ivy, Scarecrow, Supergirl, to Wonder Woman. There’s even a companion free-to-play app for iOS, with a limited feature set, and the return of stamina system that incentivises payments.

How to access: PlayStation 4, Xbox One, or iPhone/iPad
Time commitment: As much as you want, really

To make it accessible for modern gamers, Fire Emblem Echoes has enhanced graphics, 3D dungeons, and interactive towns where you can talk to non-playable characters (NPCs). It’s also fully voiced this time around, which is a first for the series. Echoes follows childhood friends Alm and Celica as they are forced to fight on the opposite sides of a war between their nations.

The game has been well received by most critics, with reviewers praising the classic feeling, and its presentation on the 3DS, though its battle sections can be quite frustrating.

Music:
After Laughter by Paramore
Ever since they started working on their debut album All We Know Is Falling, Paramore’s history off the record has been about band members leaving and coming back. Bassist Jeremy Davis has left, been expelled, returned, and then exited – after which he was embroiled in a legal battle that ended earlier this month.

Brothers Josh and Zac Farro left in 2011 after a bitter dispute, with Josh accusing lead singer Hayley Williams of treating the group as her solo project. The younger Zac returned last year, citing he had been led astray by his brother. Through it all, Willaims and multi-instrumentalist Taylor York have been the only constants.

Paramore’s fifth full-length album, After Laughter, comes four years after their self-titled instalment. Williams has said in multiple interviews she was unsure it was going to come together. It’s an impressive outing nonetheless, with Hard Times, Told You So, Fake Happy, and Caught in the Middle displaying the range they are capable of.