The new DC movie is coming to India. 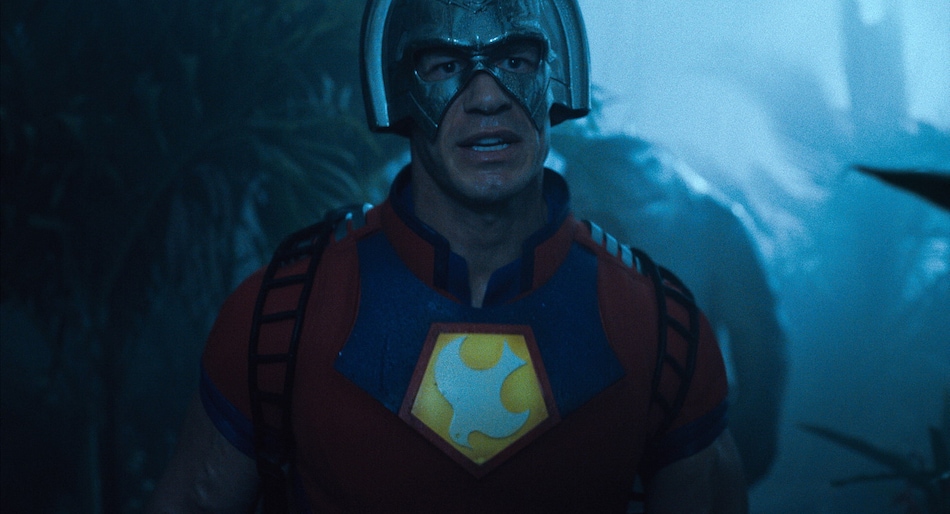 John Cena as Peacemaker in The Suicide Squad

The Suicide Squad is back — in the hands of Guardians of the Galaxy writer-director James Gunn, who jumps from the Marvel Cinematic Universe to the DC Extended Universe. (Don't worry Marvel fans, he's switching back to the MCU as he has Guardians of the Galaxy Vol. 3 next up.) For those who have some memory of the 2016 dumpster fire Suicide Squad — poor you (and me) — a movie that has since been disowned by its director David Ayer, The Suicide Squad lies somewhere between being a sequel and a soft reboot. Essentially, it's best to think that the first chapter doesn't exist. It's the only acceptable way to live anyway. Who wants to be reminded of Jared Leto's Joker after all? Okay, I'm sorry!

But why is the new Suicide Squad movie stuck in this middle ground? Well, that's because it's keeping some of the first film's cast members: Margot Robbie, Joel Kinnaman and Viola Davis are all back. But they are surrounded by a largely new ensemble that comprises the new Task Force X — that's the government-assigned name for the gang of supervillains who are given assignments that aren't worth risking anyone else — most of whom will be killed off, Gunn himself has teased. What's the new mission? Destroying a Nazi-era laboratory called Jotunheim on the fictional island of Corto Maltese, where they must contend with the forces of a local dictator and the giant alien Starro.

From F9 to The Suicide Squad, What to Watch in August

Gunn has been afforded more freedom than Ayer, with The Suicide Squad only the fourth film based on a DC Comics property to be rated R (in the US) and/or certified A (in India). Zack Snyder's 2009 Watchmen, Joaquin Phoenix-led Joker, and Justice League Snyder Cut were the previous ones. For the DCEU though, The Suicide Squad is a first. Snyder Cut doesn't count as it's not considered part of DCEU, unlike the original Justice League.

The Suicide Squad is also the first major movie to release in India as cinemas reopen following the debilitating second wave of the ongoing COVID-19 pandemic. It will be in select cities though, in Andhra Pradesh, Chhattisgarh, Delhi NCR, Gujarat, Haryana, Jharkhand, Karnataka, Madhya Pradesh, Punjab, Rajasthan, Telangana, Uttar Pradesh, and Uttarakhand. Two major markets (Maharashtra and Tamil Nadu) are missing at launch, where The Suicide Squad will release when cinemas reopen. Available in English, Hindi, Tamil, and Telugu, the new DC movie releases in 2D and IMAX 2D formats — IMAX is exclusive to English though.

With that, here's everything you need to know about The Suicide Squad, be it when you can watch, where to watch, who's in it, what it's about, and if there's a sequel coming.

The newest DC movie is out Thursday, August 5 in cinemas across India in English, Hindi, Tamil and Telugu. On the same day, it will also be available in theatres in Argentina, Australia, Brazil, Denmark, Germany, Hong Kong, Italy, Mexico, Netherlands, Portugal, Russia, Saudia Arabia, Singapore, Slovakia, South Korea, and Ukraine.

On Friday, August 6, The Suicide Squad will roll out in Bulgaria, Canada, Estonia, Finland, Lithuania, Poland, Spain, and the US. It will release Friday, August 13 in Japan, and Thursday, August 19 in Germany. Previews might be available a day prior in select territories.

The Suicide Squad has already released in Belgium, France, Ireland, Switzerland, Turkey, and the UK.

As with all Warner Bros. movies releasing in 2021, The Suicide Squad will have a day-and-date release in cinemas and on HBO Max in the US for the first month.

Hence, The Suicide Squad is out Friday, August 6 on HBO Max and should be available until Tuesday, September 5. It's included in your HBO Max subscription at no additional charge.

There's no word yet on when online ticket bookings will open for The Suicide Squad in India, but it's expected soon given we are so close to release date at this point. We will update the moment we hear from Warner Bros.

Robbie continues as The Suicide Squad's female lead Harley Quinn, making this her third appearance as the character following 2016's Suicide Squad and 2020's Birds of Prey. On both previous instances, she was also the lead. Robbie's Harley Quinn needs no introduction at this point.

Idris Elba (Luther, Hobbs & Shaw) takes over from Will Smith's Deadshot as the male lead — or rather, he was originally cast as Deadshot, but Gunn changed his role to Bloodsport later. Elba's Bloodsport has advanced tech weapons that only he can use. He joins Task Force X so that he can be reunited with his daughter Tyla, played by Storm Reid (Euphoria).

They are joined by John Cena (F9, Bumblebee) as ruthless patriotic killer Peacemaker described by both Cena and Gunn as a “douche-y bro” take on Captain America. Peacemaker is set to get his own spin-off series on HBO Max.

Kinnaman returns as Rick Flag, the on-field leader of Task Force X. But as with the film, Kinnaman's Flag has been a blank slate. Kinnaman has said that this version is sillier, more naïve, and less jaded.

Sylvester Stallone is the voice of King Shark, a man-eating fish-human hybrid with a "dad-bod" courtesy of Gunn to make him look less like an animal. King Shark's design switched from hammerhead shark (as in the comics) to a great white shark because it was awkward to have him talk with others while having eyes on side of his head. Steve Agee played King Shark on set.

Davis is back as Amanda Waller who runs the Task Force X programme, as is Jai Courtney as boomerang-wielding Australian thief Captain Boomerang. Unlike Rick Flag, their characters are largely unchanged.

Peter Capaldi (Doctor Who) rounds out the main cast as highly-intelligent supervillain The Thinker.

Beyond that, there's David Dastmalchian (Ant-Man) as “experiment gone wrong” Polka-Dot Man who serves as the film's tragic character, Daniela Melchior (Valor da Vida) as bank robber and rat-communicator Ratcatcher 2 who's the heart of the film per Gunn, and Michael Rooker (Guardians of the Galaxy) as computer hacker Savant.

The first look at the new Suicide Squad came last August at DC FanDome, with a two-minute behind-the-scenes sneak peek featuring cast members hyping up the DC movie. Alongside, we were introduced to the film's massive ensemble cast of characters.

A first trailer (below) came this March, telling us what to expect from Gunn's take on Suicide Squad and teasing the tentacled monster starfish villain Starro. That was followed in April by a trailer suited to audiences of all ages, after premiering in front of Godzilla vs. Kong screenings.

The final trailer for The Suicide Squad arrived in late June, giving us another look at Starro and their Corto Maltese mission codenamed “Project Starfish”. And then in mid-July, Gunn unveiled a character featurette to reintroduce the ensemble.

Welcome to hell — a.k.a. Belle Reve, the prison with the highest mortality rate in the US of A. Where the worst Super-Villains are kept and where they will do anything to get out — even join the super-secret, super-shady Task Force X. Today's do-or-die assignment? Assemble a collection of cons, including Bloodsport, Peacemaker, Captain Boomerang, Ratcatcher 2, Savant, King Shark, Blackguard, Javelin and everyone's favorite psycho, Harley Quinn. Then arm them heavily and drop them (literally) on the remote, enemy-infused island of Corto Maltese.

Trekking through a jungle teeming with militant adversaries and guerrilla forces at every turn, the Squad is on a search-and-destroy mission with only Colonel Rick Flag on the ground to make them behave…and Amanda Waller's government techies in their ears, tracking their every movement. And as always, one wrong move and they're dead (whether at the hands of their opponents, a teammate, or Waller herself). If anyone's laying down bets, the smart money is against them — all of them.

Review: The Suicide Squad Is More Than DC's Guardians of the Galaxy

While Warner Bros. has yet to officially announce anything as yet, Gunn has spoken about his desire to make another Suicide Squad movie: “I've had ideas, actually. If I did a sequel, it's not like, 'Hey, let's assemble another team and let's do this!' It would be very different.”

The earliest Gunn could start on a sequel to The Suicide Squad would be in late 2022 or early 2023. That means it wouldn't release before 2024. This is all if Warner even greenlights a sequel to begin with.

Until then, you will have to make yourself happy with Peacemaker, coming in 2022 to HBO Max. And it's possible some of them might show up elsewhere in the DCEU too.

Here's the official poster for The Suicide Squad from Warner Bros.: