The Shape of Water, Annihilation, and More – The Weekend Chill 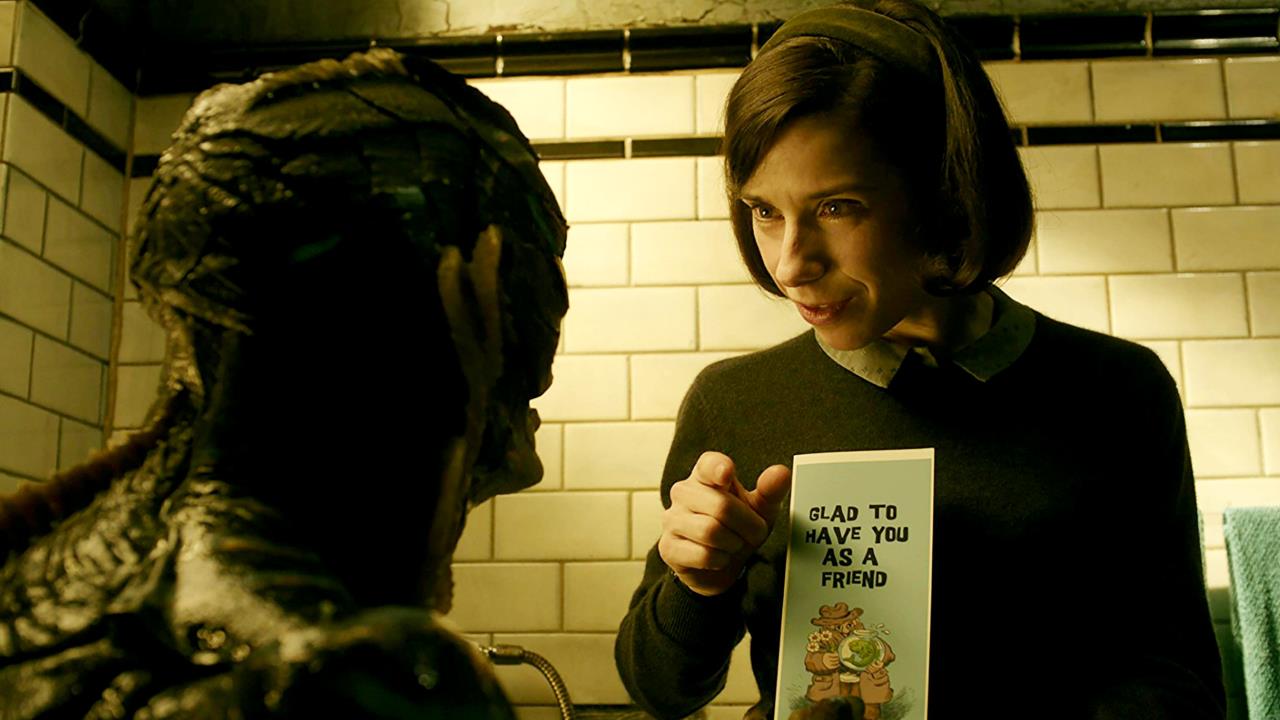 This week, Tuesday brought us the first trailer for Fantastic Beasts: The Crimes of Grindelwald, the second chapter in J.K. Rowling’s Wizarding World franchise. It stars Jude Law as a young Albus Dumbledore, alongside returning stars Eddie Redmayne, Katherine Waterston, Dan Fogler, Alison Sudol, Ezra Miller, and Johnny Depp. The Crimes of Grindelwald is out November 16.

Later that day, Deadline reported that FX had signed writer-director Alex Garland (Ex Machina, Annihilation) for a TV pilot for a tech thriller show called Devs. Here’s the official synopsis: “A young computer engineer, Lily, investigates the secretive development division of her employer, a cutting-edge tech company based in San Francisco, which she believes is behind the disappearance of her boyfriend.” Devs will be an eight-part series.

On Thursday, a new report from Deadline said that director Ava DuVernay (A Wrinkle in Time) is “closing a deal” with Warner Bros and DC for an adaptation of The New Gods, created by Jack Kirby. Currently, it has no connection to other DC properties, just like that planned Joker origin story.

Lastly, Jon Hamm (Mad Men) is reportedly in talks to star opposite Natalie Portman in Pale Blue Dot, an astronaut drama from Fargo and Legion creator Noah Hawley. The film follows a female astronaut (Portman) who starts to unravel in life on Earth after returning from a space mission, and explores the theory that those who spend long periods in space lose sense of reality.

Movies:
Annihilation
Loosely adapted the first novel in Jeff VanderMeer’s best-selling Southern Reach trilogy, Annihilation – writer-director Alex Garland’s first studio venture – is about a biologist and former soldier named Lena (Natalie Portman), who volunteers for a scientific mission into The Shimmer, an extra-terrestrial phenomenon caused by a meteor that’s taking over US soil, to uncover what happened to her husband Kane (Oscar Isaac).

Joining her on this expedition are psychologist Dr. Ventress (Jennifer Jason Leigh), paramedic Anya (Gina Rodriguez), physicist Josie (Tessa Thompson), and geomorphologist Cass (Tuva Novotny). The film alters many of the book’s elements, including the status of Kane, but the focus remains the same: Garland uses the extra-terrestrial event of The Shimmer to probe into the human condition.

Annihilation has received much praise from critics, for its intellectual and philosophical storyline, plus the acting of its ensemble, especially Portman, Isaac, and Leigh. We said as much in our review of the film, noting its exploration of self-destructive nature, fantastic visuals, and a serious study of humanity’s flaws. The only problem is that it can be a little too ambiguous at times.

How to access: Netflix
Time commitment: 1 hour and 55 minutes

The Shape of Water
Winner of Best Picture at the 2018 Oscars, Guillermo del Toro’s Cold War-era monster fairy tale is set in and around a high-security secret government laboratory in 1962 Baltimore, where the lonely and mute Elisa Esposito (Sally Hawkins) works as a janitor. Her life is changed forever when she meets, befriends, and falls in love with a captured humanoid amphibian creature (Doug Jones via mo-cap).

The film also stars Octavia Spencer as Elisa’s co-worker and friend, Michael Shannon as a military man and the primary antagonist, Richard Jenkins as Elisa’s neighbour and friend, and Michael Stuhlbarg as a scientist in the lab. The Shape of Water also won Best Director for del Toro at the Oscars, for work that many have called his best since Pan’s Labyrinth, one that upends many of the traditional fairy-tale and monster movie tropes.

How to access: Amazon IN, Amazon US, Amazon Video US, Google Play US, iTunes US, or Microsoft Store US
Time commitment: 2 hours and 3 minutes

Call Me by Your Name
Winner of Best Adapted Screenplay at the 2018 Oscars, the film is set in 1983 northern Italy, and centres on a 17-year-old bibliophilic American-Italian boy (Timothée Chalamet), who spends his summer days transcribing classical music, and flirting with his friend Marzia (Esther Garrel). He has a close relationship was his father (Michael Stuhlbarg), a professor in Greco-Roman culture, and his mother (Amira Casar), a translator.

When a 24-year-old American graduate student named Oliver (Armie Hammer) arrives at their summer home as an intern, Elio and him slowly discover the two have feelings for each other. What proceeds is a sensual, heartfelt, and memorable tale about first love, powered by terrific acting from its two male leads. Call Me by Your Name is based on a novel of the same name by André Aciman, and serves as the final chapter in director Luca Guadagnino’s thematic Desire trilogy.

The film has received overwhelming praise from critics. Slate’s Dana Stevens called it “the kind of movie you live in as much as watch”, and that some images will stay with you like “memories of your own half-remembered romance”. The Atlantic’s David Sims concluded: “Each element is carefully calibrated, but deployed with consummate grace—this is a film to rush to, and to then savour every minute of.”

How to access: Amazon US, Amazon Video US, Google Play US, iTunes US, or Microsoft Store US
Time commitment: 2 hours and 12 minutes

I, Tonya
Retired controversial American figure skater Tonya Harding is the subject of this biographical film from director Craig Gillespie (Million Dollar Arm), starring Margot Robbie (Suicide Squad) as Harding, whose legacy has forever been defined by her connection to the infamous and ill-conceived attack on fellow US competitor Nancy Kerrigan, despite being the first American woman to land a triple axel.

I, Tonya features mockumentary-style interviews with the main characters, including Harding’s then lover and husband Jeff Gillooly (Sebastian Stan), her mother LaVona Golden (Allison Janney), and Harding herself. The film takes a darkly comedic approach to the events of Harding’s life, which was the source of one of the most sensational scandals in sports history, and benefits from strong performances: Janney won the Oscar for Best Supporting Actress.

Writing for Vox, Alissa Wilkinson said “the hilarious and gut-punching I, Tonya is a nearly pitch-perfect black comedy that distills the sensational story into two potent insights very relevant to 2017”, and called it “also a supremely entertaining sports movie”. Indiewire’s David Ehrlich praised Robbie’s work, noting “she does a brilliant job of skating along the thin line that runs between glory and the gutter”.

How to access: Amazon US, Amazon Video US, Google Play US, iTunes US, or Microsoft Store US
Time commitment: 1 hour and 59 minutes

Other mentions:
The Disaster Artist, the comedy-drama directed by and starring James Franco as Tommy Wiseau, based on the making on the making of The Room – called “the greatest bad movie ever made” – is now available on Blu-ray and streaming. Franco won Best Actor – Musical/ Comedy at Golden Globes for his work, and his performance was praised by many critics.

The new Jumanji: Welcome to the Jungle, with Dwayne Johnson, is now available on Google Play and iTunes in India, ahead of the film’s Blu-ray release internationally next week.

Meanwhile, Netflix added the original Jumanji this week, in addition to Django Unchained, Kung Fu Panda 2, Groundhog Day, The Social Network, Taxi Driver, Hellboy, The Adventures of Tintin, Moneyball, Inside Job, and A Bug’s Life among others.

Hotstar’s week consisted mostly of new episodes for ongoing shows, with two interesting additions on Friday: the live-action box office hit Beauty and the Beast starring Emma Watson, and Jane, a fascinating documentary on 83-year-old primatologist Jane Goodall, often called the world's best expert on chimpanzees. The latter was on our list of best hidden gems of 2017.

Amazon Prime Video didn’t have any big additions this week, except Baby Driver.

Video games:
Burnout Paradise Remastered
A little over a decade since its original release, EA’s extremely-enjoyable open-world racer Burnout Paradise is back with a 4K remaster for today’s high-end consoles, the PlayStation 4 Pro and the Xbox One X. Burnout Paradise Remastered includes all previously released downloadable content (DLC) as you’d expect, including the Big Surf Island update, but minus the Time Savers pack, so you need to unlock the vehicles all over again.

Beyond that, this is the same game you know and loved, be it gameplay, race events, the game world, or the controls. Minor changes include the removal of real-world companies from billboards, possibly due to expiration of licence agreements, and an updated intro video that features Big Surf Island.

We weren’t too pleased with the remastered version of Burnout Paradise, especially in its visuals. “It doesn’t look as good as it could be,” we noted, adding that it’s “it's noticeably sharper with improved textures and slightly more varied colours, but there’s nothing that would make us think it warrants the [Rs. 2,300+] price tag”. Critical consensus seems to be slightly higher, so give it a try if you loved the original.

How to access: PlayStation 4 or Xbox One
Time commitment: At least 14 hours

Surviving Mars
Having primarily worked on medieval/ ancient history city-building games for years, Bulgaria’s biggest game developer – Haemimont Games – has now taken to the stars. Its latest offering puts you in the role of an overseer who must colonise Mars, and then survive. It starts with choosing a space agency for resources and financial support, then picking a location on the red planet.

Once there, you’ll need to invest in infrastructure, research, and new technology to find more ways of not just expanding your settlement, but also shaping it for life. That means having to grow your own food, find minerals to mine, and even setting up places for people to enjoy. Of course, don’t let that distract you from the main task in the title. It’s like SimCity on Mars.

Surviving Mars has received good reviews. IGN’s T.J. Hafer noted that it has a poor tutorial, but “there’s a lot of excitement, challenge, and customisation to enjoy beneath and beyond the grand, glass habitation domes”, while Destructoid’s Josh Tolentino loved the attention to detail, “zooming in on the kinds of small-scale community-building that I'd always felt the that city-builders with a grander scope lacked”.

How to access: Steam for Windows, macOS and Linux, PlayStation 4, or Xbox One
Time commitment: As much as you like, really