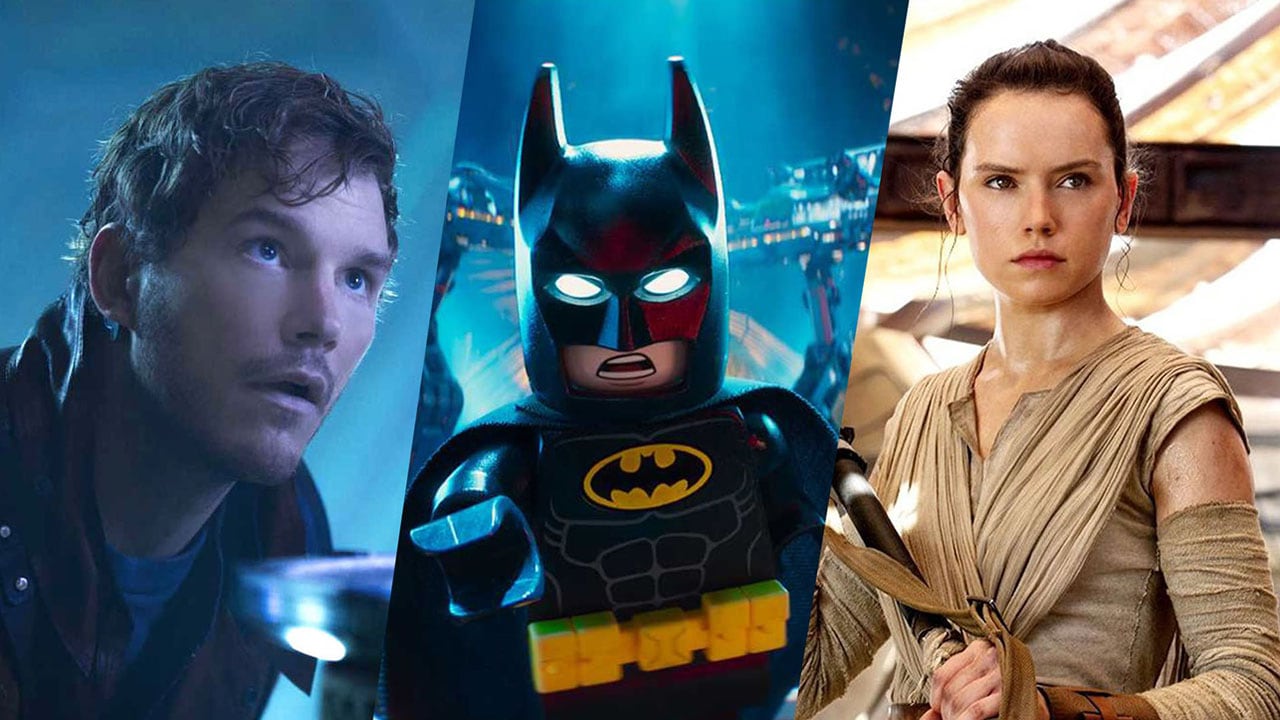 A new year means tons of new movies to look forward to. We started the year with a long list of movies we wanted to watch in 2016, but ended up with a lot of disappointments. That said, there were still a few films that salvaged the year for us. Hopefully, 2017 will fare better on the films front. While we still don’t know the full schedule, here are 36 of the most anticipated movies over the next 12 months:

Check out our other what's coming in 2017 coverage:

Smartphones in 2017: Where We Are Now and What the Future Holds

As the name states, this will be the sixth and final chapter of the Resident Evil series, which finds Milla Jovovich reprising her role as Alice, with Paul W.S. Anderson in the director’s chair for the fourth time.

Keanu Reeves’ John Wick is forced out of retirement in this follow-up to the 2014 film, and he ends up travelling to Rome to fight off the bad guys. His Matrix co-star Laurence Fishburne also stars in the movie.

Will Arnett (30 Rock) voices Batman in this spin-off from The Lego Movie, as he must save Gotham City from the Joker’s (Zach Galifianakis) clutches. Ralph Fiennes voices Alfred, Rosario Dawson is Batgirl, and Michael Cera plays Batman’s adopted son, Robin.

Hugh Jackman’s final portrayal of the iconic Wolverine is set in a post-apocalyptic future, as he must protect a female clone of himself with the help of Charles Xavier (Patrick Stewart), up against the forces led by Narcos star Boyd Holbrook. James Mangold, director on the previous solo Wolverine film, is here too.

A reboot of King Kong that focuses on his origin story, with Tom Hiddleston (The Avengers’ Loki) as a former SAS officer, and Brie Larson (Captain Marvel) as a war photojournalist. Samuel L. Jackson, and John Goodman star alongside in what is the second instalment in the Godzilla-Kong cinematic universe.

Jake Gyllenhaal (Nightcrawler), and Ryan Reynolds (Deadpool) are both part of the crew on the International Space Station in this sci-fi horror flick that revolves around a life sample from Mars, a first sign of extra-terrestrial life that threatens their survival and ultimately, humanity.

Based on the popular TV series, the superhero film marks the third attempt at Power Rangers, which is a reboot and re-imagining of the franchise. Five teenage outcasts chance upon the Power Coins, and become the titular group with Zordon (Bryan Cranston) as their mentor.

Scarlett Johansson plays a cyborg cop, The Major, who is part of a task force that stops cyber criminals and hackers. The film attracted controversy for casting a white lead in an adaptation of the Japanese manga, which has led to both past and current creators explaining why Johansson is the perfect fit for the role.

James Ponsoldt (The Spectacular Now) directs the sci-fi drama based on a novel of the same name, where Mae Holland (Emma Watson) joins a tech company whose founder, Bailey (Tom Hanks), a very Steve Jobs-ish personality by the looks of it, prides on his principle: “knowing is good, knowing everything is better.”

James Gunn returns to the director’s chair for this sequel, that features all of the old cast – Chris Pratt as Star-Lord, Zoe Saldana as Gamora, Dave Bautista as Drax, Bradley Cooper voicing Rocket the racoon, and Vin Diesel voicing Groot – albeit the last one in a different physical form (Baby Groot).

Guy Ritchie directs this retelling of the legend, with Charlie Hunnam as King Arthur. His sword Excalibur will feature prominently, as he goes up against his enemy Vortigern (Jude Law).

Ridley Scott returns to the Alien franchise in a sequel to 2012’s Prometheus that has been renamed to piggyback on the draw of the Alien name. Michael Fassbender stars as an android from the earlier entry, and the film is going for a sci-fi horror vibe that audiences loved with the original Alien films.

Pirates of the Caribbean: Dead Men Tell No Tales
Release Date (expected): May 26, 2017

The fifth entry in the long-running series will have Johnny Depp’s Jack Sparrow at the centre of the action once again, with Orlando Bloom returning after missing the fourth entry. Javier Bardem stars as Captain Salazar, who returns with his crew of ghost pirates to take revenge.

Diana Prince (Gal Gadot) goes to Europe to try and stop the war of men after an American pilot called Steve Trevor (Chris Pine) crash lands on the island of Themyscira, and becomes Wonder Woman in the process. The film is part of DC Extended Universe (think Batman and Superman), and has Patty Jenkins directing events.

Tom Cruise stars in a reboot of The Mummy, which looks like a happiness-drained version of Mission Impossible with a horror twist. Sofia Boutella plays the part of The Mummy, who will eventually link into a shared universe of monsters alongside the likes of Frankenstein’s monster, Count Dracula, and others.

The anthropomorphic vehicles return in this Pixar animated film that seems to be taking a grittier approach than any film by the studio, which finds Lightning McQueen left in the dust by a new generation of racers.

Michael Bay returns to the director's seat for his fifth and final Transformers film, with Mark Wahlberg in the lead for the second time, alongside Anthony Hopkins as a new addition. Expect tons of metal carnage and shards as always.

Steve Carell will return as the charming villain Gru in the third instalment of the franchise, and he will face a new villain to be voiced by South Park co-creator Trey Parker. The rest of the cast makes a return too, along with the minions, of course.

Tom Holland’s Peter Parker gets his own film – after a small appearance in Captain America: Civil War – with Robert Downey Jr. (Iron Man) in the role of mentor, in what is now the second reboot of Spider-Man in under a decade. In this new chapter, Parker must balance his high school life and fight the Vulture (Michael Keaton).

The franchise continues its tradition of having a new human character in every chapter with the addition of Woody Harrelson as an important part of the humans’ army, while Andy Serkis returns as chief ape Caesar in the third entry to the Planet of the Apes reboot series which puts men and ape in full-scale war.

Valerian and the City of a Thousand Planets
Release Date (expected): July 21, 2017

Based on a sci-fi comic series, director Luc Besson (Léon: The Professional) brings a $180-million take starring Dane DeHaan as time-traveller Valerian, and Cara Delevingne as his partner Laureline. Rounding up the support cast are Clive Owen, Ethan Hawke, Rihanna, and John Goodman.

Based on Stephen King’s book series, and starring Idris Elba, and Matthew McConaughey, The Dark Tower is taking a different approach to book adaptations – the film will follow the ending of the seventh book as Elba looks for The Dark Tower in End-World.

Based on a graphic novel, Charlize Theron plays a spy who is tasked with making a list of double agents in the city of Berlin, as she must cooperate with station chief James McAvoy. John Goodman, and Sofia Boutella also star in a global action-thriller that takes place on the eve of the Wall’s collapse.

Denis Villeneuve (Arrival) directs this sequel that has Ryan Gosling in the lead, and Harrison Ford involved in a bit part. Gosling’s Officer K is a new blade runner whose quest takes him to locate Ford’s Deckard.

Matthew Vaughn comes back as director for the sequel, which stars Taron Egerton, Julianne Moore, Halle Berry, Colin Firth, Jeff Bridges, Channing Tatum, and even Elton John in a small role. Moore plays the main villain who blows the Kingsman HQ, and forces Eggsy and his counterparts to travel to America.

Earlier known as God Particle, its new name seems to be a placeholder. But at least it has helped clear up the rumours surrounding Julius Onah’s latest venture, and we now know it will be the third entry in the Cloverfield franchise. Daniel Brühl, Gugu Mbatha-Raw, and David Oyelowo form the cast.

The Marvel Cinematic Universe saga continues with the third standalone film for Thor, which will also involve Hulk, both of whom were missing from Captain America: Civil War. Thor has to face off against the Asgardian goddess of death Hela (Cate Blanchett), directed by Taika Waititi (Hunt for the Wilder people).

Zack Snyder directs this follow-up to Batman v Superman: Dawn of Justice, that stars everyone from Ben Affleck, to Henry Cavill, Gal Gadot, Jason Momoa, Ezra Miller, Ray Fisher, Amy Adams, Amber Heard, Jeremy Irons, and J. K. Simmons. The film picks up where the previous left off, with Affleck’s Batman on a mission to put together a team to fight bigger threats.

Four teenagers get pulled into the world of Jumanji and turned into their opposite adult selves in this adventure which continues the story of the 1995 original. Dwayne Johnson, Kevin Hart, Jack Black, Nick Jonas, and Karen Gillan will play the adult versions of the characters.

Mark Wahlberg is set to play Colonel Steve Austin in this movie based on a 70s sci-fi TV series about a former astronaut with bionic implants that gives him superhuman strength, with Damián Szifron attached to write and direct.