Dimple Kapadia and Mumbai star in the Christopher Nolan film. 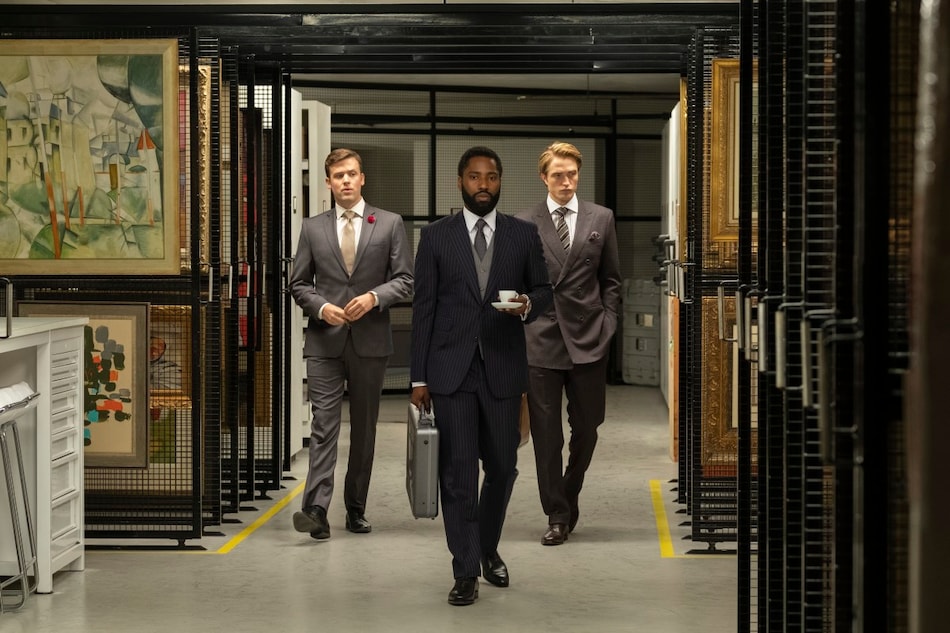 Tenet has finally come to India. More than three months since its global premiere, Christopher Nolan's latest film will finally roll into Indian cinemas this week. Thanks, COVID-19. If you've been waiting to catch Tenet in India, you can finally do so — in English, Hindi, Tamil, or Telugu. The IMAX experience is only available in English though. Tenet is even more special for Nolan fans in India, given that it was shot in India and even stars a couple of veteran Indian actors. But due to the ongoing coronavirus pandemic, we've been unable to see what Nolan does with Mumbai. And even now, it's a gamble.

From Tenet to Durgamati, What to Watch in December

The anticipation for Tenet is so high that some screens have been fully booked — the limit they are allowed to anyway, with a 50 percent cap. Being in an indoor AC environment where social distancing guidelines are meaningless and with strangers who might take off their masks to eat and drink poses a great risk, as we've discussed before. And you shouldn't risk getting COVID (and giving it to others) to watch a movie. Especially now that Tenet's Blu-ray and digital release on international platforms is less than two weeks away. Sure, you will have to pay more, but not getting COVID is priceless.

Yes, you won't get access to local-language dubbed versions at home, but you won't have to wait too long for that either. Warner Bros. India usually does Blu-ray releases two months of the theatrical release. You already waited a few months, what's a couple of months more?

Now that Tenet is around the corner, here's everything you need to know — no spoilers here — about Nolan's latest film.

Christopher Nolan's latest movie, Tenet, is out Friday, December 4 in cinemas across India.

This comes a month after Maharashtra — the state with the most screens in India — allowed cinemas to reopen. Tenet was originally slated to release in July, but was then delayed multiple times due to the pandemic, before settling on a late August bow in many markets. But Indian theatres were still shut then, and Warner Bros. India had to wait before they could bring the Nolan film here.

Tenet will be available in regular 2D and IMAX 2D only. There's no 3D option because Nolan isn't a fan of 3D.

Ticket bookings for Tenet opened last Friday and are now available with all major cinema chains — PVR Cinemas, INOX, Cinepolis, and Carnival Cinemas — in cities across India. Tickets are available on BookMyShow, Paytm, and the official websites of the aforementioned players.

The first teaser trailer for Tenet was released in August 2019, and screened only theatrically in front of Fast & Furious: Hobbs & Shaw in select theatres in the US. The same teaser was screened in front of Joker IMAX screenings in October 2019 in India.

In December 2019, Warner Bros. released the first Tenet trailer for everyone online, which introduced the marketing tagline (“Time runs out”) and set up the film's confusing world (some things move backwards) and stakes (World War III). Later that month, a six-minute prologue was unveiled in front of Star Wars: The Rise of Skywalker in select IMAX theatres in the US, which came to India with Birds of Prey IMAX screenings in February 2020.

Warner Bros. gave us a second Tenet trailer back in May — when Nolan was still insisting on a July release date for the film — which revealed that the weird backward moment is because the film deals with time inversion, not time travel. It even came with a tutorial of sorts, as Washington's character “caught” a bullet instead of shooting it.

A final trailer for Tenet followed in August as the film geared up for its release internationally. Set to Travis Scott's new single for the Tenet soundtrack, “The Plan”, the final Tenet trailer came up with more explanations for how its world works and teased the movie's endgame.

At the time of writing, Tenet has made over $357.8 million (about Rs. 2,632 crores) globally. That's a far cry from what Nolan's films have made in the past, with the film's $56.9 million-haul in the US — traditionally the single biggest market for Hollywood movies, and around 50 percent of the total gross — considered a major disappointment.

But it's worth noting that there is no context for box office success during a global pandemic. Nolan said as much when he defended the worldwide box office haul. The Tenet writer-director said he was “thrilled” with the $350-million+ take and added: “But I am worried that the studios are drawing the wrong conclusions from our release – that rather than looking at where the film has worked well and how that can provide them with much needed revenue, they're looking at where it hasn't lived up to pre-COVID expectations and will start using that as an excuse to make exhibition take all the losses from the pandemic instead of getting in the game and adapting – or rebuilding our business, in other words.”

The latest Nolan film has a 71 percent score and a 6.9/10 average rating on reviews aggregator Rotten Tomatoes, based on the opinions of 280 critics. On fellow review aggregator Metacritic, Tenet has a “generally favourable” 69 score, based on 47 critic reviews.

Gadgets 360 won't have a Tenet review prior to release as a safe viewing environment or a digital screener was not provided to our critic; only a public screening with several others in an enclosed space.