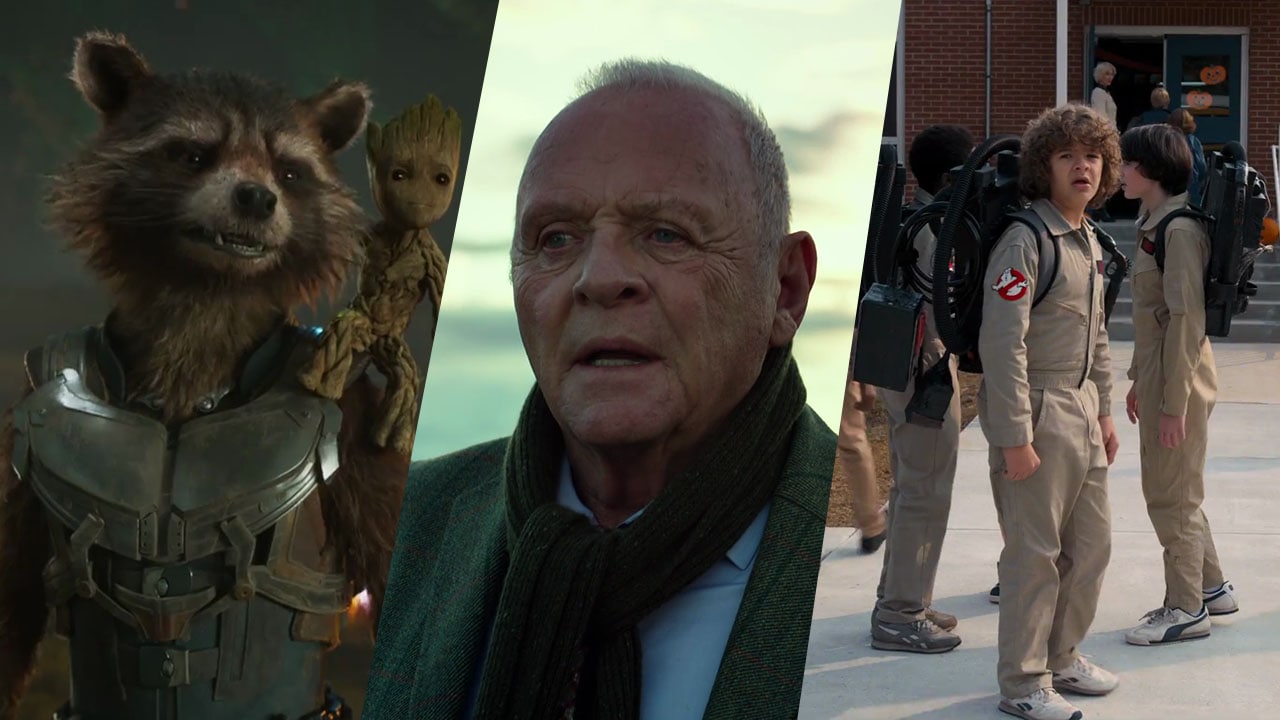 The annual Super Bowl football game is one of the biggest events on television, and thanks to that it’s become a tradition (and necessity) for the big-money brands to advertise their offerings. In some cases, that’s movie and TV show trailers.

The New England Patriots may have won on the field, but here are the ones who made splashes in the commercial breaks of Super Bowl 2017:

Guardians of the Galaxy Vol. 2
Set to the tunes of Fleetwood Mac’s hit The Chain, from its 1977 album Rumours, Marvel’s spot for Guardians of the Galaxy Vol. 2 re-introduced its diverse cast of trouble-making individuals – alongside Star-Lord (Chris Pratt), Gamora (Zoe Saldana), Drax (Dave Bautista), Rocket (Bradley Cooper), and Baby Groot (Vin Diesel), Yondu (Michael Rooker) and Nebula (Karen Gillan) made an appearance too. Plus, there’s Mantis (Pom Klementieff), who can read the emotions of other people.

Guardians of the Galaxy Vol. 2 opens May 5 in theatres worldwide.

Stranger Things
After turning into a breakout hit over the past summer, Netflix brought Stranger Things to the Super Bowl, in the form of a teaser trailer for season two of the show. It seems to be going big on the monster front, with a tentacled creature appearing in a drawing and in the sky, surrounded by a ghastly red light. Beyond that, the spot features Mike Wheeler (Finn Wolfhard), Dustin Henderson (Gaten Matarazzo), and Lucas Sinclair (Caleb McLaughlin) in Ghostbusters costumes – notably, Byers is missing from that.

Logan
Hugh Jackman is returning to his most famous role as Wolverine from the X-Men universe in this year’s Logan, which received a new teaser trailer during the Super Bowl, set to the song Amazing Grace. There’s tons of action as before, with the young X-23 (Dafne Keen) running from danger or somersaulting over her enemies, men clad in black carrying guns, and Wolverine driving his claws through people. The film is set in a future where Wolverine, now Logan, is caring for an ailing Professor X (Patrick Stewart).

The Fate of the Furious
“Are you going to turn your back on family?”, Letty (Michelle Rodriguez) questions Dom (Vin Diesel) in the opening few seconds of the new Super Bowl trailer for the eighth instalment in the Fast & Furious franchise. The response is a kiss between Charlize Theron and Diesel, after which the trailer regurgitates footage from the first trailer, along with inter-titles that remark “the rules have changed”. As usual, there’s a lot of explosives and bullet casings flying all over the place, along with a submarine that sees the crew end up in the Arctic, maybe?

You can find out when The Fate of the Furious drives into theatres on April 14.

Ghost in the Shell
If you can set aside the controversy surrounding Scarlett Johansson’s casting in the live-action Ghost in the Shell, the Rupert Sanders-directed venture seems to be building towards something truly exciting. The new teaser, which aired during Super Bowl LI, brings slices of new footage to the previous one – with an intriguing voice-over that says: “They did not save your life. They stole it.” For the uninitiated, Johansson plays a cyborg policewoman called The Major, part of a task force called Section 9, which targets computer hackers.

Ghost in the Shell will hit cinemas worldwide on March 31.

Transformers: The Last Knight
The Super Bowl spot for the fifth Transformers film, starring Mark Wahlberg in the lead for the second time, is promising answers for why the metal warriors keep coming to Earth, as Anthony Hopkins’ Sir Edmund Burton tells us. Mankind and Transformers are at War in The Last Knight, and the teaser ends with Bumblebee and Optimus Prime going at each other, in what seems like a fight that will end with the death of one or both. It’s also the last entry to be directed by Michael Bay, who’s been with the franchise since day one.

Transformers: The Last Knight is scheduled for a June 23 release.

The Handmaid’s Tale
Adapted from Margaret Atwood’s novel of the same name, Hulu’s new series got a new trailer that begins with Elisabeth Moss narrating: “I had another name, but it’s forbidden now.” The show is set in a dystopian version of the US called Republic of Gilead, a society that harks back to “traditional values” – meaning subjugation of women – after facing environmental disasters and a plunging birth-rate. Moss’ character, now called Offred, is a handmaid forced to produce babies, who must deal with the powers that-be.

The Handmaid’s Tale will air on Hulu, starting April 26.

Life
Coming across as a mash-up of Gravity and Alien, Life’s new trailer establishes the characters, and the magnitude of their achievement, which eventually turns into a nightmare. Jake Gyllenhaal, Ryan Reynolds, and Rebecca Ferguson are part of the crew on the International Space Station, who intercept a pod carrying life from Mars. But as is with sci-fi movies, a disaster awaits them. With the Mars sample of life threatening their survival, they must find a way to save themselves, and everyone else back on Earth.

Life has a release date of March 24.

John Wick: Chapter 2
A new teaser for the sequel to John Wick aired before the Super Bowl game, parodying its Valentine’s Day weekend competition – Fifty Shades Darker – in its opening ten seconds, by way of inter-titles that note: “Slip into something a shade darker”. By that, Lionsgate and Keanu Reeves’ John Wick mean the colour of his suit – it’s black – and the tone of the film, we presume. There’s a lot of dramatic gun cocking, guns blazing, Wick slamming into people, and cars crashing into each other to the tune of the beats.

Pirates of the Caribbean: Dead Men Tell No Tales
An undead bird appears at the beginning of the new Super Bowl trailer for the fifth chapter in the Pirates of the Caribbean franchise, which now features Javier Bardem as Captain Salazar, out to get revenge on Johnny Depp’s Jack Sparrow. “The dead have taken command of the sea,” a new character informs someone, and the audience in turn. “They are searching for a Sparrow.” From the spot, it seems that the undead not only have a ship that can bend, but they can also walk on water. Depp makes only a brief appearance at the end, with the trailer devoted to Bardem and his clan.

Dead Men Tell No Tales sails into cinemas on May 26.