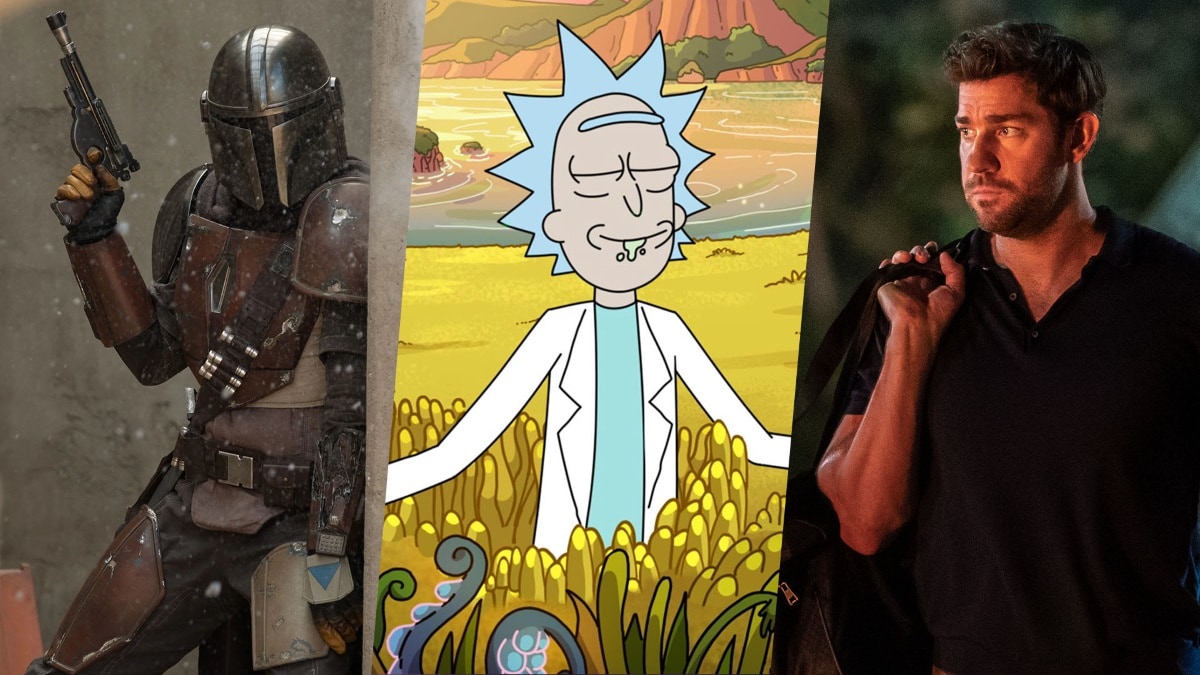 (L-R): The Mandalorian, Rick and Morty, and Jack Ryan

HBO's new sequel take on Watchmen, from Lost co-creator Damon Lindelof, was the best of the October lot by far, as it gave superhero fans something new while also delivering as a thinking man's socio-political drama. Elsewhere in October, the Breaking Bad spin-off movie El Camino, the double Paul Rudd series Living with Yourself, and the star-studded anthology series Modern Love were well-received as well. And lastly, the tech bro-culture satire Silicon Valley and the Rami Malek-starrer techno-thriller Mr. Robot returned to kick off the beginning of their respective ends. Both those shows will continue through November as they release weekly episodes.

Joining them in November are several new dramas from Apple TV+ — featuring the likes of Jennifer Aniston, Jason Momoa, and Joel Kinnaman — which launches at the top of the month worldwide. At Rs. 99 per month, it's one of the most affordable offerings in India, though it doesn't have a lot to offer content-wise. Apple isn't the only one launching a new streaming service in November, with Disney joining the fray too, but Disney+ isn't coming to India Asia for a couple of years. And there's still no word on whether we can expect any of its content to show up on Hotstar, which it owns. Sorry, Star Wars fans. The Mandalorian is still part of our list, though, as fans will no doubt find what they are looking for.

From the mind of Battlestar Galactica creator Ronald D. Moore comes a new sci-fi series set in an alternate history where the Soviet Union pips the United States to get a man on the Moon before Neil Armstrong made it. Counter to what happened in the real world, it prolongs the space race between the two superpowers. Joel Kinnaman, Michael Dorman, Wrenn Schmidt, and Sarah Jones are part of the cast. Early reviews paint a favourable picture.

When: November 1
Where: Amazon Prime Video

John Krasinski heads to Venezuela for the second season of his spy action series, where he must thwart the plans of a ruthless president who has undermined the democratic state to financially benefit himself and powerful foreign backers. Noomi Rapace (Millennium series), Michael Kelly (House of Cards), Jovan Adepo (The Leftovers), Jordi Mollà (Riddick), Cristina Umaña and Francisco Denis (Narcos) join the cast in season 2.

In Better Season 2, Jack Ryan Tackles How the US Is Its Own Worst Enemy

Jennifer Aniston returns to television (for a main role) after 15 years with this drama set inside the newsroom of a morning cable show, as a newsreader who fights to hold onto her job after her news partner of 15 years (Steve Carell) is fired for sexual misconduct and an aspiring journalist (Reese Witherspoon) tries to take her place. Apple has reportedly spent $300 million on two seasons of the show, thanks to Aniston and Witherspoon's $2-million-per-episode fee. Early reviews claim all that money has been wasted.

Apple's attempt to have the next Game of Thrones takes place in a post-apocalyptic world where a virus has decimated human population and robbed the survivors of the ability to see. But an upheaval is around the corner after twins are born with the power of vision. Starring Jason Momoa (Aquaman) and Alfre Woodard (Luke Cage) in the lead, it's been written by Peaky Blinders creator Steven Knight. Apple has reportedly spent $240 million on two seasons, but it's an all-out disaster, per early reviews.

When: November 5
Where: Hotstar

Dafne Keen (Logan), Ruth Wilson (Luther), James McAvoy (Split), Lin-Manuel Miranda (Hamilton), and Clarke Peters (The Wire) head the cast of this second — and first series — attempt to adapt Sir Philip Pullman's epic fantasy adventure novel trilogy. It seems it will shy away from Pullman's criticism of religion, going by what writer Jack Thorne (Harry Potter and the Cursed Child) and producer Jane Tranter have said in the past. Already renewed for season 2.

The End of the F***ing World

When: November 5
Where: Netflix

Nearly two years after it ended on a cliff-hanger, the British young adult dark comedy-drama — based on a graphical novel of the same name — returns to continue the story of rebellious aloof teenagers James (Alex Lawther) and Alyssa (Jessica Barden). Set two years after the events of the first season, it finds Alyssa working as a waitress and possibly being pursued by a new killer called Bonnie (Naomi Ackie). Just don't expect a third season though, says creator Charlie Covell.

When: November 9
Where: Netflix

The Mumbai-based millennial couple, Dhruv Vats (Dhruv Sehgal) and Kavya Kulkarni (Mithila Palkar), must contend with a long-distance relationship in the third season of this comedy-drama, which forces them to confront their “deepest fears”. Kavya realises she's closer to her family after being apart from Dhruv, who “comes to terms with the idea of an ever-shifting home”. Season 2 director Ruchir Arun returns to helm all eight episodes, written by Sehgal.

From Little Things to Big Deals: How India's Dice Media Shot for Netflix and Beyond

When: November 11
Where: Netflix

Just over two years since the end of the previous season — the longest gap yet for the acclaimed adult animated comedy — Rick and Morty returns for season 4, which will air in two parts across the New Year's divide. Five episodes in 2019, and another five sometime in 2020. Not much is known about the plot, but the likes of Taika Waititi, Kathleen Turner, Sam Neill, and Paul Giamatti will have guest roles. New episodes weekly.

When: November 12
Where: Disney+

Easily the biggest TV show of the month, Pedro Pascal stars in the lead of the first-ever live-action Star Wars series, which is set between the sixth and seventh (numbered) film and follows a lone gunfighter (Pascal) in the outer reaches of the galaxy. Gina Carano, Carl Weathers, Giancarlo Esposito, and Werner Herzog are also part of the cast. Jon Favreau is at the helm, though directing duties are being handled by Bryce Dallas Howard, Taika Waititi, Dave Filoni, Rick Famuyiwa, and Deborah Chow. New episodes weekly.

When: November 17
Where: Netflix

It's a whole new world, nearly two years on. Well, sort of. Olivia Colman, Tobias Menzies, and Helena Bonham Carter are taking over the respective roles of Queen Elizabeth II, Prince Philip, and Princess Margaret for the third season, which will chronicle Harold Wilson's time as Prime Minister from 1964 to a royal divorce in 1978. Diana Spencer (Emma Corrin) and Camilla Shand (Emerald Fennell) will be part of season 3 as well, though they will have a larger role in season 4.

When: November 28
Where: Apple TV+

M. Night Shyamalan is the executive producer on this psychological thriller series for Apple — its first new show after launch at the start of November — that follows a couple (Toby Kebbell and Lauren Ambrose) who replace their new-born baby with a life-like doll after its death. Harry Potter star Rupert Grint and Game of Thrones alum Nell Tiger Free are also part of the cast.