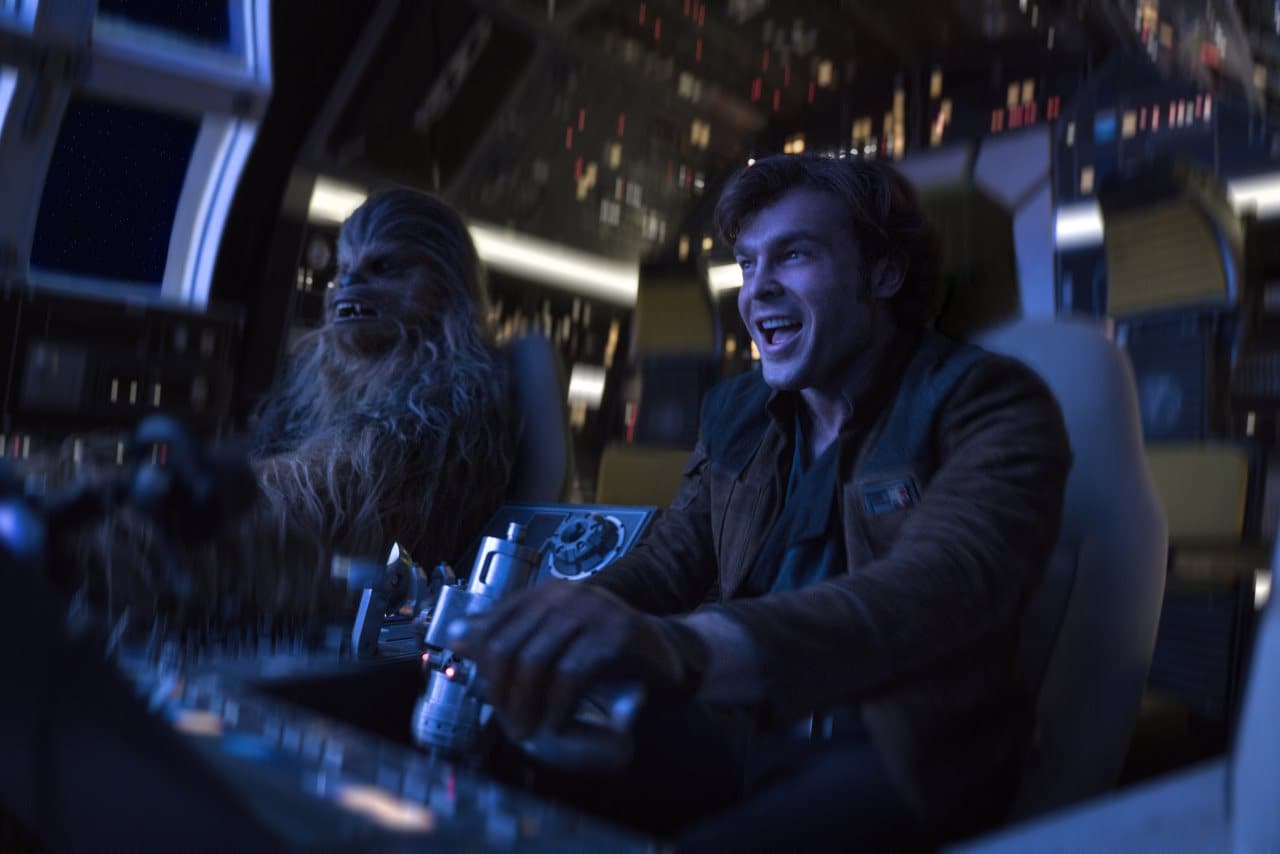 On Monday, Netflix announced that it had struck a multi-year deal with the Obamas to produce films and TV shows for its service. Later that day, Warner Bros. released the first trailer for its Jungle Book adaptation, Mowgli, which is out October 19. The studio also revealed the title for the sequel to The Lego Movie – it’s called The Lego Movie 2: The Second Part. And finally, reports said that Jake Gyllenhaal is in talks to play villain Mysterio in the Spider-Man: Homecoming sequel.

On Tuesday, we learnt that the mid-credits scenes in Deadpool 2 are canon, which means they’ll affect future chapters, be it Deadpool 3 or X-Force. Also on Tuesday, Variety brought word that Apple had tapped Once Upon a Time writers Adam Horowitz and Edward Kitsis as the new showrunners for its Amazing Stories reboot, while THR said that Ryan Reynolds and Michael Bay were teaming up to make a movie for Netflix called Six Underground.

And later that day, Lost co-creator Damon Lindelof said that his adaptation of Watchmen, coming to HBO, will be an original story and not a direct adaptation. On Wednesday, Variety reported that the show had found its cast. Later, Deadline reported that Warner Bros. has put George R.R. Martin’s 1980 children’s book The Ice Dragon into production for the big screen. Also on Wednesday, Netflix set a premiere date for The Simpsons creator Matt Groening’s new show, Disenchantment.

On Thursday, sources close to THR said that Lucasfilm had tapped writer-director James Mangold (Logan) to helm the next standalone Star Wars movie centred on bounty hunter Boba Fett. And lastly, producers confirmed that the 25th James Bond movie would start filming later this year, for an October 25, 2019 release date.

Movies
Solo: A Star Wars Story
Continuing its trend of standalone chapters set prior to the original trilogy, Lucasfilm is back with an origin story for one of its most famous characters, Han Solo, portrayed by Harrison Ford in Episodes IV-VII. The role has been recast with Alden Ehrenreich (Hail, Caesar!) and follows his journey before we met him in the Mos Eisley cantina in A New Hope.

Solo: A Star Wars Story Has Lots to Show, Nothing to Say

Solo isn’t a hit with most critics, including this one. Though it’s got a top-notch cast – with Waller-Bridge’s voice role, and Glover and Clarke’s work being highlights – the Star Wars film suffers from low stakes and a predictable plot (because we already know much about Han), and never takes off in a fashion that would please its titular hero.

How to access: Out in cinema halls
Time commitment: 2 hours and 15 minutes

A Fantastic Woman
This Oscar winner for Best Foreign Language Film is the story of Marina (Daniela Vega), a transgender woman working as a waitress and singer in Santiago, Chile. After her boyfriend, an older man, suddenly falls ill and dies, Marina is forced to confront his family and society, and to fight to show all of them who she is: a woman.

Co-written and directed by Sebastián Lelio, A Fantastic Woman (Una mujer fantástica in its native Spanish) offers an empathetic look at the difficulties faced by persecuted minorities, and benefits from Vega’s performance and her experience as a transgender woman. It’s now finally available on Blu-ray, having spent over a year in the festival circuit and limited releases.

The film was one of the highest-rated in 2017. The Guardian’s Peter Bradshaw called it “a brilliant film: a richly humane, moving study of someone keeping alive the memory and the fact of love”, while The Atlantic’s David Sims said it’s “a tremendous portrait of grief and prejudice” and “an incredible showcase for Vega, who excels in a role that’s unfortunately rare in film”.

How to access: Amazon US, Amazon Video US, Google Play US, iTunes US, or YouTube US
Time commitment: 1 hour and 44 minutes

Graduation
Two years after its Cannes debut, where writer-director Cristian Mungiu (4 Months, 3 Weeks and 2 Days) shared the Best Director Award, this drama about a doctor (Adrian Titieni) in a small Romanian town who comprises his values to help his teenage daughter (Maria Dragus) keep her scholarship in the UK is now on Blu-ray.

Graduation doesn’t hit the same heights of his Palme d’Or-winning 4 Months, 3 Weeks and 2 Days, according to critics, but that’s admittedly a very high bar. It’s still a good film by itself, one that gives more credibility to the Romanian New Wave film movement. And with Criterion Collection handling the Blu-ray release, you also get access to Mungiu's 2013 film Beyond the Hills.

Writing for RogerEbert.com, Godfrey Cheshire called it “a fascinating and fastidiously complex study of one man’s moral choices at a crucial juncture in his life”, while The New York Times’ A.O. Scott felt it’s “claustrophobic and suspenseful as a horror movie, [and] a thriller of sorts, built around an excruciating ethical problem. He is unstinting in his sympathy and unsparing in his judgment.”

How to access: Amazon US, Amazon Video US, Google Play US, iTunes US, or YouTube US
Time commitment: 2 hours and 8 minutes

Other mentions
On the streaming front, the biggest additions this week on Netflix include the second season of Israeli hit Fauda, Trollhunters: Part 3, a comedy special from Steve Martin and Martin Short, and Vox’s new show Explained.

Michelle Wolf, Unbreakable Kimmy Schmidt, Fauda, and More on Netflix This May

Amazon Prime Video added Inception this week, while Hooq now has the Oscar-winning Call Me by Your Name for digital purchase. That’s about it.

Video games
Dark Souls: Remastered
Nearly seven years since it debuted on the last generation of consoles, Dark Souls – the first of its name but second in the Souls series – is back with a remastered version, developed by the Polish studio QLOC. It promises to run at native 4K 60fps on PS4 Pro, Xbox One X, and PC, a high jump considering the crippling single-digit frame rates at times in the original.

If it’s appealing to newcomers, Dark Souls: Remastered must battle its own success as a franchise that has spawned an entire sub-genre of games known as ‘soulslike’. Thankfully, it has better textures and lighting, in addition to several changes to online multiplayer, from dedicated servers to increase in maximum number of players. There’s even a Nintendo Switch version slated for later this year.

Reviewers are happy with what they see, including us. Dark Souls: Remastered has been praised for its upgraded visuals and vastly improved performance, though it’s shame that there aren’t many changes to the gameplay or the cumbersome menu design.

How to access: PlayStation 4, Steam for PC, or Xbox One
Time commitment: About 50 hours

Runner3
Eschewing the over-complex title of its 2013 side-scrolling predecessor, California-based indie developer Choice Provisions is back with a sequel, Runner3, a rhythm platformer that puts you in control of CommanderVideo, the Bit.Trip protagonist that has appeared in Super Meat Boy, Super Smash Bros for Wii U (as a trophy), Minecraft (as a skin), and Retro City Rampage.

With him, you’ll get to jump, double-jump, wall-jump, slide-jump, slide, kick, float, drive, fly, and dance your way to victory, trying to preserve the “love and happiness in the multiverse” by completing rhythm-based levels. As before, there are five modes in ascending order: Hyper, Mega, Super, Ultra, and Extra. Runner3 brings new mechanics such as riding vehicles and side-quests.

How to access: Nintendo Switch, or Steam for Windows and macOS
Time commitment: Over 6 hours

Music
Sparkle Hard by Stephen Malkmus & the Jicks
Nearing its second decade of existence, the Portland, Oregon-rock band that formed after Pavement’s demise near the turn of the century, returned after a four-year gap to release their seventh album last Friday, Sparkle Hard, featuring a guest appearance from Kim Gordon (formerly of alt rock outfit Sonic Youth). The album finds them more experimental, being more melodic and rough on different songs, and exploring multiple genres on the same track at times.

Wide Awake! by Parquet Courts
After their critically-acclaimed 2016 album won a spot in multiple year-end lists, indie rock outfit Parquet Courts are back with their sixth full-length album, Wide Awake!. In an interview with Billboard, co-frontman Andrew Savage said it has a funk influence and added: “There's a lot of moments on the record when all of us are singing at the same time and I guess that's something I kind of associate with hardcore, or Funkadelic.”

The album has received much praise from critics. The A.V. Club’s Laura Adamczyk called it “a full arc of an album, one that captures both Parquet Courts’ usual keyed-up exasperation and their new, hard-earned optimism”, while Drowned In Sound’s Andrew Harrison said it’s “a success all-round -- the joyous sound of a band taking everything that makes them great and amplifying it, toying with it and producing something even greater”.