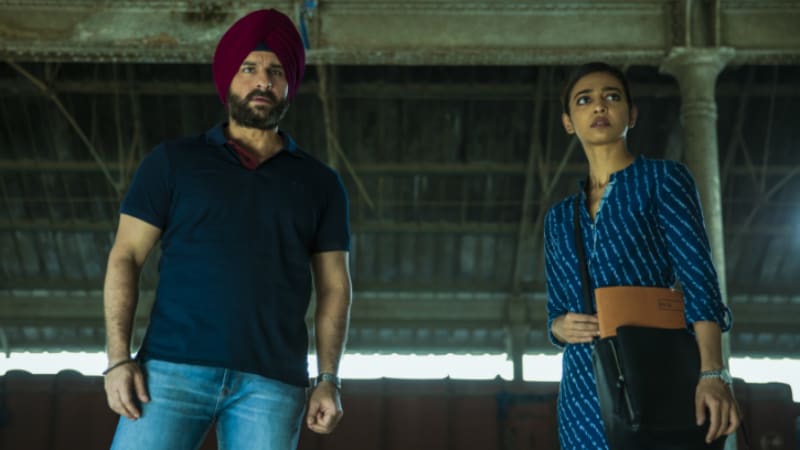 Sacred Games, Netflix's first Indian original series, was released globally on the streaming platform on July 6. Based on Vikram Chandra's thriller novel of the same name, and starring big names like Saif Ali Khan, Nawazuddin Siddiqui, and Radhika Apte, it is one of the better web/ TV series to come out of India in a long time. With directors Anurag Kashyap and Vikramaditya Motwane at the helm, this is one Netflix original you should not miss. You can download and watch offline all the eight Sacred Games season 1 episodes on the Netflix mobile app for Android and iOS. If you are looking for Sacred Games plot summary for each of the eight season 1 episodes released for Netflix subscribers last week, we got you covered. Interestingly, names of all episodes have been derived from Hindu mythology and have a significance in the plot. Needless to say, Sacred Games season 1 spoilers after this point.

Episode 1: Ashwathama
The first episode of Sacred Games starts off with a dog falling off a high-rise building in Mumbai, a plot element that will be emphasised later on in the season. Following that is the entry of Nawazuddin Siddiqui, as yesteryear gangster Ganesh Gaitonde, who hints that something sinister is about to happen in Mumbai. Running parallel is the story of junior Mumbai Police cop Sartaj Singh (Saif Ali Khan) who is looking for a big case to prove his mettle to the corrupt department he works in. He gets an out-of-the-blue call from Gaitonde himself giving him a tip about something destructive that will happen in Mumbai in the next 25 days. Gaitonde claims to know Sartaj Singh's father.

Sartaj Singh is able to trace Gaitonde's location, and the gangster shoots himself in the head in front of the cop. What follows is a flashback story, narrated by Nawazuddin Siddiqui himself, that focuses on the dark childhood and teenage life of the gangster that led him to become a ruthless criminal.

Episode 2: Halahala
With the death of Ganesh Gaitonde starts a 25-day countdown that carries on throughout the length of the show. Sacred Games now brings Bollywood to the fold, introducing an up and coming actress who seems to have some connection with Gaitonde; seeing the news of the gangster's death, she threatens someone to get her file from the murdered talent manager otherwise, else she would bring everyone down with her. This episode also marks the entry of Radhika Apte as Anjali Mathur, a Research & Analysis Wing (RAW) agent investigating the case. Sartaj Singh is suspended by Deputy Commissioner of Police Parulkar for not cooperating with him in an investigation over misuse of power. The suspended Sartaj Singh joins forces with Anjali Mathur and discovers that the murdered talent manager was keeping fake currency supplied by Pakistan's ISI (a case Mathur had been investigating at RAW), and had also been escorting Bollywood and TV actresses to Gaitonde.

Intertwined in between is the story of Gaitonde's emergence as the mega gangster of slums in 1980-1990s' Bombay. He is seen attempting to gather power, but beaten up by a slumlord and gets his first visit from Parulkar, a sub-inspector back then. Notably, the parts of Nawazuddin Siddiqui's flashback have been shot by Anurag Kashyap, while Vikramaditya Motwane has shot the current-day scenes that involve Saif Ali Khan's character.

Episode 3: Atapi Vatapi
The episode starts off with 'harmless' cop rivalry that involves a blow to the face between Sartaj Singh and Majid, in classic Vikramaditya Motwane style. The chase resumes as cop Sartaj uses evidence from the murder of the talent manager to track back to a TV soap actress, Nayanika, who is coerced into giving sexual favours to Gaitonde's most trusted gang member, Bunty. As before, a flashback starts and viewers are transported back to how Gaitonde met this gang member. It is then followed by Gaitonde's admiration and pursuit of a girl, Kukoo, who is involved with the rival gang's leader, Suleiman Isa. Events start pacing up fast and a shootout helps Gaitonde get the girl. Back in the current-day scenario, Singh and Mathur get closer to Bunty by laying a trap through Bunty's girlfriend.

Episode 4: Brahmahatya
The setup is slammed wide open as Bunty catches sight of the hidden camera planted by Singh's informant, Nayanika. Singh, waiting right outside Bunty's house, is caught and taken into the house where he tries to goad the gangster into revealing the impending danger on the city of Mumbai. Bunty is seen rushing off to a warehouse complex in the outskirts of the city, where he meets with a mysterious man who has been seen in a couple of instances in the past few episodes, mostly involved in covering up evidence. Once again, the story goes back to gangster Gaitonde's past where he is shown climbing his way up the ladder by mingling with corrupt politicians and police officials. This is where we meet a small-time politician who will later go on to become the Union Home Minister, with ties to both Gaitonde and DCP Parulkar. The episode ends with a cliffhanger that shows a burqa-clad individual pointing a gun towards Gaitonde, as part of the flashback.

Episode 5: Sarama
To save his informant, Sartaj Singh follows Bunty and his sidemen to the safehouse. The cop is cornered, though fortunately for him, Mumbai Police arrives. However, instead of apprehending Bunty, they shoot him dead on DCP Parulkar's orders. However, the informant Nayanika, whom Sartaj Singh feels responsible for, is also shot dead in the process.

Back in Bombay in 1992, Gaitonde's terror spreads as his men take out rival gang members by the dozen. He decides to settle down by getting married but the rival gangster Isa sends him a "gift" of his own by murdering one of his closest aides on the day of the wedding. Gaitonde anyway decides to get married, to his house maid. The story shifts to the Bollywood actress, mentioned initially in the second episode, who is blackmailed by her actor boyfriend to act in an in-house film production or risk getting caught in the Gaitonde scandal.

Episode 6: Pretakalpa
Having tried to find a link between his father and Gaitonde, Sartaj Singh turns to his mother but comes back without an answer. Meanwhile, the Bollywood actress uses her police links to get her blackmailing boyfriend in trouble. She uses the "dog murder" in the first scene of the first episode as a point of leverage against him. On the sidelines of the plot runs a story of a small-town gang from a Muslim-majority slum of modern-day Mumbai. Sartaj Singh and his team of cops go after these thugs and the situation ends up getting violent. Singh's main sidekick is murdered as are all the hoodlums as part of a countermeasure. In the meanwhile, back in the 1990s, Gaitonde finds about a traitor among his closest camaraderie and takes action by killing the traitor and his brother.

Despite having links with corrupt senior police officials, the Bollywood actress somehow gets cornered by honest cop Sartaj Singh who extracts names of suspicious individuals who might be involved with the incident expected to hit Mumbai in the next few days. In Anurag Kashyap's flashback story, rival gang members come to take a last hit at killing Gaitonde but end up murdering the gangster's wife. Gaitonde, for the next few days, goes on a rampage, killing innocent people on the streets of Mumbai. He also sets on fire entire slums filled with Muslim families. This triggers the city's police department to put him in jail where he is beaten every day with no mercy - while he thinks this treatment is being meted out to him for the murders he committed, it is actually a way for a godman to break his spirit, using the police. In the parallel current-day story, Sartaj Singh and the RAW agent Mathur inch closer to the people involved in the upcoming attack. While Singh drifts off to find a secret location, Mathur (Apte) is shot dead by the same mysterious man in previous episodes.

Episode 8: Yayati
The final episode of the first season of Sacred Games is full of twists and turns. We finally see the link between Gaitonde and Sartaj Singh's father, wherein the latter is just a helpful prison officer who helps the gangster with food and water during his torturous stay under lockup. Sartaj Singh, in his pursuit, is caught and tied right in front of the mysterious man, who is now revealed to be a key player of the upcoming attack, supplying weapons in trucks commissioned by the Union Home Minister. Mumbai Police officers track down Singh's location and take over the location that is filled with arms and ammunition. While being questioned by NSA agents, the Union Home Minister reveals little but his comments to Parulkar later hint at a religious war brewing in the background. In a sort-of-conclusive ending to the series, Sartaj Singh tried to connect the missing pieces of the puzzle and a discourse by a godman (previously seen in the 1990s flashbacks as the mastermind behind Gaitonde's torture) on TV helps him locate a secret hideout that houses materials required to carry out a nuclear blast.