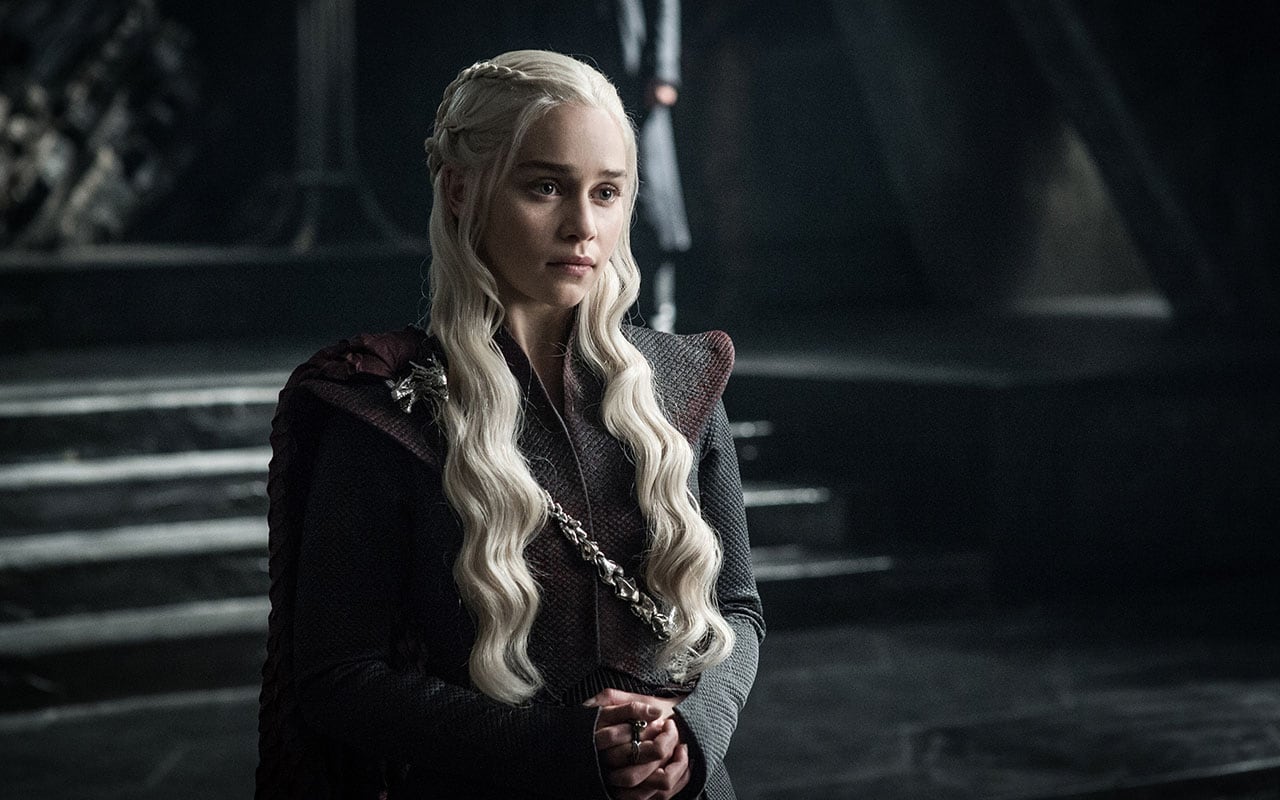 On Monday, we were treated to the first teaser trailer for Peter Jackson-produced Mortal Engines adaptation – based on Philip Reeve’s book of the same name – which is set thousands of years in a post-apocalyptic environment, where cities have gone mobile to make the most of scattered resources. Mortal Engines rolls in December 14, 2018.

Paramount provided release dates for a bunch of new Hasbro-themed films later that day. A third G.I. Joe film will arrive March 27, 2020 despite the failure of past entries; a Micronauts movie on October 16, 2020; even Dungeons and Dragons is getting an adaptation on July 23, 2021; and an untitled film for October 1, 2021.

Tuesday brought us the first trailer for Ocean’s 8, the all-female spin-off of Ocean’s Trilogy from Steven Soderbergh. The title is justified by making Sandra Bullock play Ocean’s (George Clooney) sister, who forms her own team to pull off a heist at the annual Met Gala. The stellar ensemble includes Cate Blanchett, Anne Hathaway, Mindy Kaling, Sarah Paulson, Rihanna, Helena Bonham Carter, Damian Lewis, and James Corden, alongside a dozen cameo appearances. Ocean’s 8 is out June 8, 2018.

Netflix has tapped two new leads for its hit crime drama Narcos, in Diego Luna (Rogue One) and Michael Peña (Ant-Man), to replace Pedro Pascal for the fourth season of the show. The reason for that is Narcos’s move to Mexico, as anyone who’s caught up with the third season will know.

Andy Serkis’ version of The Jungle Book has been in production before Disney released its adaptation last year, and it has now been retitled from Jungle Book: Origins to Mowgli. Given it’s out just two years after the Jon Favreau-directed one – October 19, 2018 – Warner Bros. thought it best to change the name to not confuse audiences, and make this one feel new/different.

On Wednesday, a Bloomberg report revealed that a sequel for Will Smith-starrer Bright is already in the works at Netflix. That makes it the first film franchise at the streaming service, a curious choice given the overall negative reception for the fantasy buddy cop movie.

Lastly, Quentin Tarantino’s Star Trek movie has found a writer: Mark L. Smith (The Revenant). It’s an interesting choice, since Tarantino’s films – most of which he writes himself – are usually full of dialogue, and Smith’s Hollywood breakthrough came on a film that had very little of it.

TV:
Game of Thrones
The seventh and penultimate year of HBO’s massive fantasy epic – based on characters created by George R.R. Martin, but now well ahead of his books – wasn’t quite able to live up to the storytelling finesse and ingenuity of previous years (owing to lacking GRRM’s word) but it easily delivered several huge moments fans had been waiting for, what with the amount of build-up we’ve had over six seasons.

[Spoiler alert] The end of the season finally saw the destruction of the Wall, with the White Walkers entering the land of the living, thanks to the power of undead-Viserion and the foolishness of… okay we’ve complained enough in the past. Elsewhere, characters continued to drop like flies, with some bloodlines close to being wiped out.

Game of Thrones season 7 was also the show’s first shortened run, with just seven episodes. With the final eighth season not due until 2019 by most reports, the Blu-ray release – which comes with a two-part featurette detailing the production design, a behind-the-scenes featurette for one of the season’s key moments, and audio commentary tracks – is a great way to revisit Game of Thrones.

How to access: Amazon IN, or Amazon US
Time commitment: 7 hours and 17 minutes

Runaways premiered last month on Hulu and is now available on Amazon in India, with new episodes every week. In our review, we noted the show gives kids and parents equal time unlike the comics, though it faces an uphill task in introducing its ensemble cast of sixteen. If you haven’t read the comics, here’s a fun fact: there’s a dinosaur in the show.

Marvel's Runaways Throws Magic, Religious Cult, and a Dinosaur in a Kids vs Parents Battle

Movies:
It
Based on Stephen King’s over 1,000-page horror novel from three decades ago, It marked the book’s first big screen adaptation, after a TV mini-series in 1990. The film keeps the same story, with a group of seven children facing their biggest personal fears as they attempt to fight an evil clown named Pennywise (Bill Skarsgård), whom they simply refer to as ‘It’.

Intended to be the first chapter in a duology, director Andres Muschietti’s work was labelled a largely faithful adaptation of King’s story. It’s got the usual jump-scares, though critics felt that it’s the child cast that powers the film, alongside an understanding of everyday evil.

How to access: Amazon US, Amazon Video US, Google Play Movies IN, iTunes IN, Microsoft Store US, or YouTube US
Time commitment: 2 hours and 15 minutes

Detroit
The duo of Kathryn Bigelow and Mark Boal – the director and writer, respectively, of The Hurt Locker and Zero Dark Thirty – are behind this drama that focuses one of the events that took place during the summer 1967 race riots in the titular city. John Boyega (Star Wars: The Last Jedi) and Will Poulter (The Chronicles of Narnia) lead the cast.

Rotten Tomatoes’ consensus reads: “Detroit delivers a gut-wrenching -- and essential -- dramatization of a tragic chapter from America's past that draws distressing parallels to the present.” The Blu-ray comes with a profile of the true story behind the film, a look at the cast, a comparison of the city’s past and present, and more.

How to access: Amazon US, Amazon Video US, or iTunes US
Time commitment: 2 hours and 22 minutes

Stronger
This true story stars Jake Gyllenhaal as Jeff Bauman, who lost his legs at the 2013 Boston Marathon bombing while waiting for his ex-girlfriend Erin (Orphan Black’s Tatiana Maslany) at the finish line. Bauman helped identify one of the bombers, but the film focuses on the months of physical and emotional rehab that tested his family, and inspired the community.

Directed by David Gordon Green (Our Brand Is Crisis, Pineapple Express), Stronger is a tear-jerker of a film, but it sets aside the inspirational drama clichés thanks to brave writing, and outstanding performances from Gyllenhall, and the supporting cast of Miranda Richardson (Tom & Viv), Clancy Brown (The Shawshank Redemption), and Frankie Shaw (Mr. Robot, SMILF).

The film has been universally praised by critics, with a 93 percent fresh rating on Rotten Tomatoes. The Atlantic’s David Sims said: “[It] shouldn't be dismissed as just another real-life drama to catch on cable TV someday; Stronger is a profound, sensitively made gem.”

How to access: Amazon US, Amazon Video US, or iTunes US
Time commitment: 1 hour and 59 minutes

Other mentions:
All five existing seasons of the musical drama Nashville, which begins its sixth and final season in less than two weeks, are now available on Amazon Prime Video.

Video games:
Playerunknown’s Battlegrounds
A hundred players parachute onto an island. The last one alive wins. This is the simple kernel of idea that has blown up since Playerunknown’s Battlegrounds – colloquially known as PUBG (pronounced pub-gee) – early access debut in March, driving it to the top of Steam charts in sales and most players in-game. And now, it’s finally arrived at v1.0.

Over the past nine months, the Korean development team – led by the vision of creative director Brendan Greene, who first thought of the idea with ARMA 2 – has been continuously tweaking the game with community feedback, be it gunplay, sound, animations, or server stability. The last of those has been paramount with the unanticipated traffic the game has seen.

You can play solo or in a team of four in PUBG, with each match starting in an area of 8x8km. As the match progresses – most rounds take less than 30 minutes – the playable area keeps shrinking to increase confrontation, in addition to random bombings and loot drops. Audience reception is heavily divided, so it’s up to you to decide.

How to access: Steam for PC
Time commitment: 30 minutes per round

Life is Strange: Before the Storm
Set three years before the events of BAFTA Award-winning Life is Strange, Before the Storm puts you in the shoes of 16-year-old Chloe Price, a rebel who forms an unlikely friendship with Rachel Amber after meeting her at a concert in an old mill. While the game retains the episodic graphic adventure nature, there’s no time travel because Max Caulfield is not part of the story.

But developer Deck Nine – taking over from Dontnod which is busy with role-playing title Vampyr – has given Rachel some supernatural powers of her own. Chloe’s abilities include “Backtalk”, which you can use to get out of situations, though it can have an undesired negative effect. The dialogue tree makes a return, and your decisions will affect outcomes.

The last of three episodes – titled ‘Hell is Empty’ – released earlier this week. Like past episodes, it was received favourably by reviewers, terming it a lovely story that treats its secondary characters properly, and the perfect payoff for the first two episodes. All that’s left now is a bonus episode that will feature a young version of Max.

How to access: PlayStation 4, Steam for PC, and Xbox One
Time commitment: A couple of hours

Bridge Constructor Portal, a game set in the former (Bridge Constructor) with elements borrowed from the latter (Portal), is now available on Android, iOS, and PC (Windows, macOS, and Linux), with versions for Nintendo Switch, PlayStation 4, and Xbox One coming next year.