Oscars 2019 Best Picture Nominees Guide, How to Watch Them in India 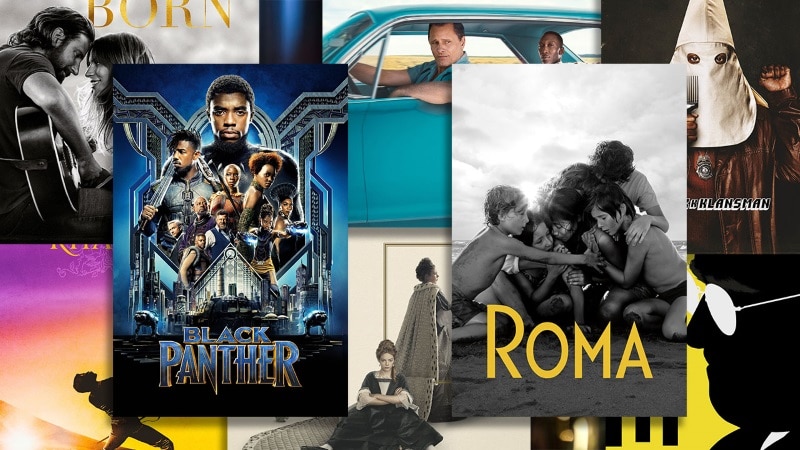 The 2019 Oscars are this Sunday, February 24, and eight films are vying for the top honour of Best Picture: Black Panther, BlacKkKlansman, Bohemian Rhapsody, The Favourite, Green Book, Roma, A Star Is Born, and Vice. There's no clear front-runner this Hollywood awards season, with the Golden Globes, the BAFTAs, and the guild awards all handing out prizes to different films. Roma, produced by Netflix, is the closest to being a front-runner at the 2019 Oscars, having won at the BAFTAs and the Directors Guild Awards, with Green Book close on its heels with a Golden Globe and Producers Guild Award in its lap. Bohemian Rhapsody won at the Golden Globes too — which has separate Best Picture categories for drama and comedy — but it's gotten no love since elsewhere.

Of the eight Best Picture nominees at the 2019 Oscars, Roma and The Favourite are tied for the highest number of nominations — 10 apiece — followed by eight each for A Star Is Born and Vice. The Favourite and Vice are two of three films that haven't made it to cinemas in India, alongside BlacKkKlansman. Technically, you can also make an argument for Roma, but that's only because Netflix films do not get theatrical releases. (It was screened at the 2018 Mumbai Film Festival, for what it's worth.) Not all the films are available to stream in India, which is why we've included links to some American resources below that might require a VPN to bypass geo-blocking. Or you could just wait.

If you plan to watch all the 2019 Oscars Best Picture nominees before the ceremony on Sunday, you should know that both PVR Cinemas and INOX have been re-releasing Oscar nominees in the month of February. A Star Is Born, Black Panther, Bohemian Rhapsody, and Green Book are playing in theatres alongside other Oscar nominees such as A Quiet Place, Avengers: Infinity War, First Man, Incredibles 2, Spider-Man: Into the Spider-Verse, and The Wife. If you live in one of the select cities — metros for the most part — you might be able to catch them. Check your local listings.

Here's a handy guide to all eight Best Picture nominees at the 2019 Oscars.

What it's about: After the death of his father, the superpowered prince (Chadwick Boseman) of a hidden, highly-advanced fictional African nation, Wakanda, returns home to take his rightful place as the king. But beset by an external force (Michael B. Jordan), who stakes his own claim to the throne and wishes to upend the country's isolationist policies, the new ruler of Wakanda starts to question everything he knows.

How to watch: Hotstar. Also playing in select theatres.

What it's about: Set in the early 1970s, the true story of the first African-American detective (John David Washington) in his city's police department, who takes on a dangerous mission — infiltrate and expose the white supremacist hate group Ku Klux Klan — to make a name for himself. Helping him is his seasoned Caucasian Jewish colleague (Adam Driver), who goes undercover and puts his life at risk. A timely commentary on racism.

How to watch: No theatrical release. Pick from Amazon Video US or iTunes US

What it's about: Toying with facts as if they have no meaning, this biopic about Queen's legendary frontman Freddie Mercury (Rami Malek) follows his life from when he joined the British rock band in 1970 to their historic performance at 1985 Live Aid benefit concert at the old Wembley Stadium in London. In between, it gives a glimpse at how some of their iconic songs came about. Naturally, the soundtrack is terrific.

How to watch: Google Play IN or YouTube IN. Also playing in select theatres.

What it's about: Like the previous film in this list, this too is a heavily dramatised account. Set in the early 18th century, it follows a ruler's close friend and confidante, Sarah Churchill (Rachel Weisz), and her impoverished younger cousin, Abigail Hill (Emma Stone), playing royal court intrigue as they attempt to garner influence — and become the favourite — of the frail Queen Anne (Olivia Colman), who is desperate for love.

How to watch: To be released in theatres. For now, Amazon Video US or iTunes US

What it's about: Another film loosely inspired by true events, chronicling the 1962 concert tour of African-American classical and jazz pianist Don Shirley (Mahershala Ali), who hires an Italian-American bouncer named Tony Lip (Viggo Mortensen) as his driver and bodyguard. Though different in nature, the two men connect and become friends as they face racism in the country's south.

How to watch: Check your local cinema listings. Else, Amazon Video US or iTunes US

What it's about: Named for the Mexico City neighbourhood its writer-director Alfonso Cuarón grew up in, the film offers a semi-autobiographical take on his upbringing, from the point-of-view of a live-in housekeeper (Yalitza Aparicio), modelled on his own. She takes care of the family's four children and balances her own life, while surrounded by domestic and political turmoil of 1970s Mexico.

How to watch: Netflix

A Star Is Born

What it's about: In this fourth remake of the 1937 original, a fading alcoholic star named Jackson Maine (Bradley Cooper) discovers and immediately falls in love with a struggling young artist called Ally (Lady Gaga) and helps hone her talent to make her a future star. But Jack's deteriorating health and the contrasting trajectory of their respective careers places an incredible strain on their relationship.

How to watch: Google Play IN, iTunes IN, or YouTube IN. Also playing in select theatres.

What it's about: Likely the most divisive film of the lot, it charts Dick Cheney's (Christian Bale) rise in the power circles of Washington D.C., from starting as a White House intern in 1969 to becoming the most powerful Vice President in the history of the United States. He presided over the invasions of Afghanistan and Iraq, which led to the deaths of thousands and the creation of ISIS.

How to watch: To be released in theatres. Out on digital and Blu-ray in the first week of March.