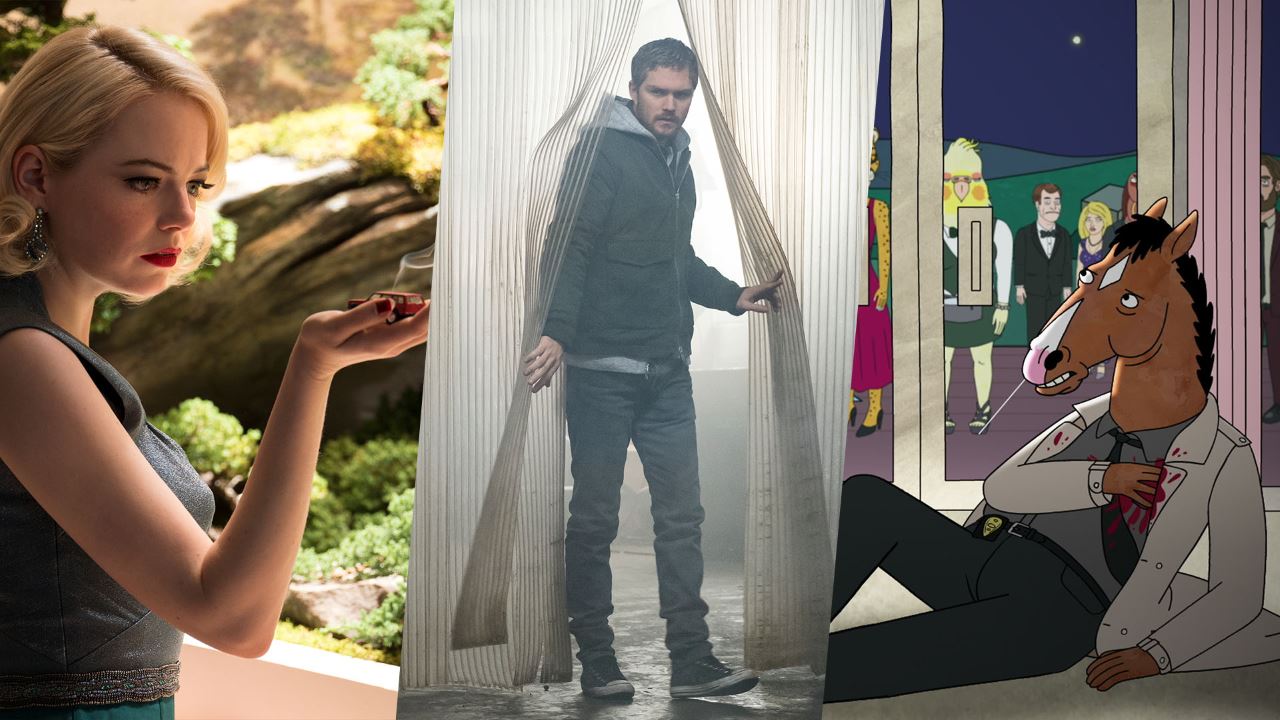 Netflix brought two more local offerings – Ghoul and Brij Mohan Amar Rahe – in August, in addition to a new show from The Simpsons creator Matt Groening. September is a high-profile month for the streaming service: there’s Emma Stone and Jonah Hill in a limited series called Maniac, out September 21, preceded by the second season of Marvel’s Iron Fist on September 7, and the fifth season of much lauded BoJack Horseman on September 14.

Beyond that, in the realm of Netflix originals, keep an eye out for the return of critically-acclaimed true crime mockumentary American Vandal. Season 2 will “investigate” a new crime at a Catholic high school where the lemonade has been contaminated. A potentially interesting new series is The Dragon Prince, an animated fantasy from Aaron Ehasz, who served as co-executive producer and head writer on Avatar: The Last Airbender. Both those shows drop alongside BoJack Horseman on September 14.

Chef’s Table is returning for a fifth chapter on September 28, touring kitchens in Philadelphia, Istanbul, Bangkok and Barcelona. Also in documentaries, City of Joy arrives September 7 – it offers a look at women in war-torn Congo who have been sexually brutalised and come together to “regain a sense of self and empowerment”.

With that, here are our five picks for September 2018 that you should watch out for, and the full list of movies and TV shows coming to Netflix India after that.

Emma Stone and Jonah Hill are two strangers, Annie Landsberg and Owen Milgrim, whose lives haven’t turned out quite right and find themselves drawn to a mysterious, mind-bending pharmaceutical trial involving a psychotropic drug and a visionary doctor (Justin Theroux). Based on the Norwegian series of the same name, it has been written by novelist Patrick Somerville and directed by Cary Fukunaga, who was behind True Detective season 1 and the 2015 war film Beasts of No Nation.

Raphael Bob-Waksberg and his writing team stumbled in the beginning with BoJack Horseman, but they have since moulded their animated series into a satire of prevalent standards on one hand, and an honest (and often gut-wrenching) exploration of depression, addiction, sexuality and self-destructive behaviour. There are no details yet on season 5, though the new in-show show he signed up for in season 4 will be a part of the events, and hopefully so will be his step-sister.

BoJack Horseman, Rick and Morty, and the Rise of Pensive Animated Comedies

Fantastic Beasts and Where to Find Them / September 7

With over two months remaining for the next chapter The Crimes of Grindelwald, this is a great time to catch up on the original (also available on Amazon Prime Video). Set in mid-1920s New York, Fantastic Beasts and Where to Find Them follows self-proclaimed “magizoologist” Newt Scamander (Eddie Redmayne) who arrives with a briefcase full of magical creatures and is unknowingly wrapped into an ongoing plot of a dark wizard. Written by J.K. Rowling herself and directed by Harry Potter film veteran David Yates.

Kubo and the Two Strings / September 6

A feature-length stop-motion film, which was also the directorial debut of Travis Knight, whose next venture is the upcoming Transformers spin-off Bumblebee. Set in feudal Japan, it follows a 12-year-old boy named Kubo (voiced by Art Parkinson) who must find a magical suit of armour his father once wore, to help defeat an evil spirit. Also features the voices of Charlize Theron, Matthew McConaughey, Ralph Fiennes, Rooney Mara, and George Takei.

A Prayer Before Dawn / September 7

Based on a book of a similar name with a longer title, A Prayer Before Dawn is the true story of a young English boxer named Billy Moore (Joe Cole) who ends up in two of Thailand’s most notorious prisons. The film was shot in an actual Thai prison with a cast mostly made up of real inmates. It's a gruelling watch – there's a brutal rape scene alongside copious amounts of violence – but one that’s rewarding and unforgettable, with an inspired performance from Cole.

Here's the full list of all the new content coming to Netflix India in September 2018. We’ve marked Netflix Original titles for your convenience.

September 6
Kubo and the Two Strings

September 10
My Teacher, My Obsession

September 12
On My Skin – Netflix Original

September 23
Queen of Katwe
VeggieTales in the House: Season 3-4