Netflix Is Out-HBOing HBO in Exclusive Shows, So Far 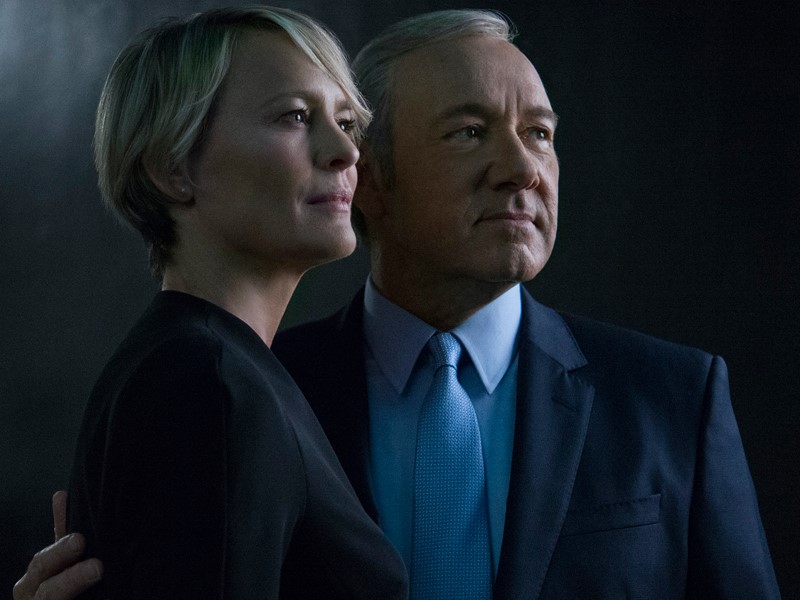 Look out, HBO. Netflix produced more original programming than cable's premium-network leader last year, according to number provided by the two rivals. The Internet video service isn't slowing down, either, even if it risks losing subscribers to price increases that will help pay for more exclusive shows.

Since its push into original shows kicked off in earnest with the 2013 debut of House of Cards, Netflix has hit the fast-forward button. Last year, it put out 450 hours of original programming, compared to 401 from Time Warner's HBO. This year, both companies say they expect to release roughly 600 hours of original material.

HBO, of course, is the network Netflix CEO Reed Hastings set out to emulate when his service began charting a course away from streaming TV reruns and previously released movies. Ted Sarandos, the company's head of programming, famously told GQ back in 2013 that Netflix's goal was "to become HBO faster than HBO can become us."

Netflix is aiming to put itself into "an entirely different and supreme league" from its rivals, says Tom Numan, a former TV network and studio executive who now lectures at UCLA's graduate school of theater, film and television. The company's goal, he says, is to become the first global network for original shows and movies.

With Netflix now available in 190 countries, Hastings expects Netflix to surpass 100 million subscribers next year. During a review of Netflix's results on Monday, Hastings declared the company "really excited" about the boost it expects from its growing library of exclusive programs.

Amazon.com, Hulu and other services are scrambling to catch up with their own moves into original programming. Although its own original slate is only a quarter the size of Netflix's, Amazon.com can boast that its shows won more Emmy awards last year than its rival.

Netflix is counting on a vast library of original programming to help keep subscribers on board as it faces tougher competition. Amazon, for instance, just started offering its streaming-video service for $9 (roughly Rs. 600) a month ; previously, you had to sign up for the company's $100-a-year Prime service, which includes free shipping from its e-commerce site and other goodies.

Netflix will test the loyalty of its long-time subscribers next month when it starts to hike their prices 25 percent, following a two-year freeze that kept rates at $8 per month. The increase will hit 17 million to 22 million US subscribers, based on analyst estimates.

Original programming doesn't come cheap. The Los Gatos, California, company ended March with $12.3 billion (roughly Rs. 81,644 crores) committed to Internet streaming rights, nearly double the $5.6 billion (roughly Rs. 37,171 crores) it spend at the end of 2012. Netflix hasn't disclosed how much of that spending has gone toward original series and exclusive movies, but the percentage has been steadily increasing.

The cost of licensing and overseas expansion has whittled Netflix's profit margins. In its first-quarter results released late Monday, the company said it earned $28 million (roughly Rs. 185 crores), or 6 cents per share, on revenue of nearly $2 billion (roughly Rs. 13,275 crores). Investors, though, are far more focused the company's subscriber growth.

So far, the company has delivered. Netflix picked up an additional 6.74 million customers in the first quarter to boost its worldwide audience to 81.5 million subscribers - up from 33 million before the first season of "House of Cards." Such gains helped propel Netflix's share price, which has more than quadrupled since then, creating about $36 billion (roughly Rs. 2,38,960 crores) in shareholder wealth.

But Netflix's stock price dropped nearly 8 percent in extended trading late Monday after the company predicted it would only add 2.5 million subscribers in the second quarter, including a gain of 500,000 customers in the US. The conservative forecast reflected the anticipated loss of some longtime subscribers due to the price increase.

There's a worrisome history here. In 2011, subscribers fled when Netflix split off its DVD-by-mail operation from its burgeoning streaming business, a shift that hiked prices as much as 60 percent for some subscribers.

Netflix lost 3 percent of its US subscribers at the time. A similar reaction to next month's price increase might cost it 510,000 to 660,000 subscribers in the second quarter.

Analysts think a repeat is unlikely. "I don't think you are going to see a lot of people bailing out and running for the exits," said Rosenblatt Securities analyst Martin Pyykkonen - largely because Netflix now has so many shows you can't find anywhere else.

That original programming appears to be a major draw for many subscribers. In a recent online survey of 2,500 U.S. adults conducted by Morgan Stanley, 45 percent cited it as a reason to subscribe to Netflix.

HBO, however, still has a huge advantage over Netflix in terms of prestige. Last year, HBO won 43 Emmys, more than any other TV network, while Netflix's original programs garnered just four - one less than Amazon.com.