Army of the Dead, Lucifer, Castlevania, and More: May 2021 Guide to Netflix, Disney+ Hotstar, and Prime Video 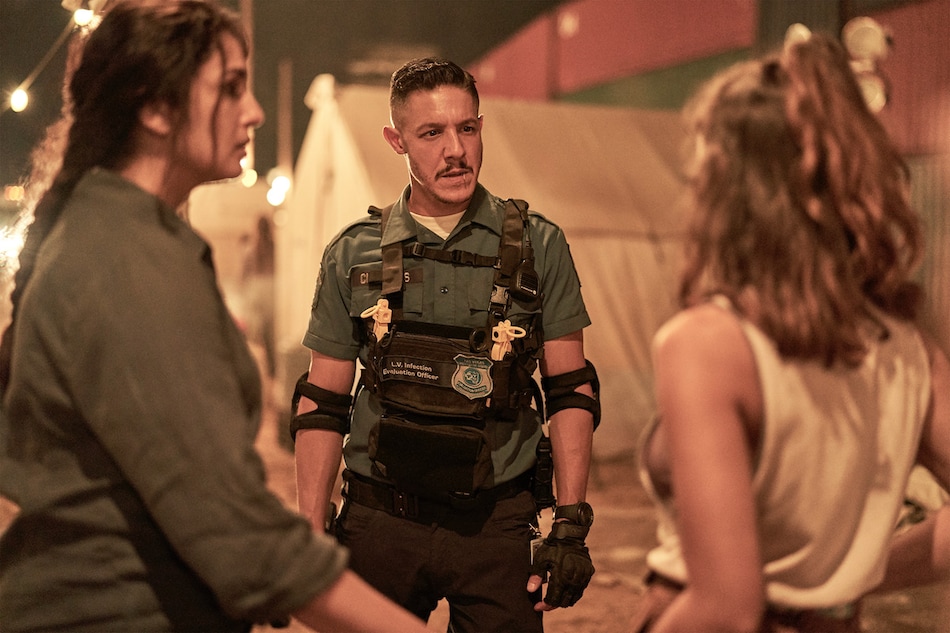 Huma Qureshi, Theo Rossi, and Ella Purnell in Army of the Dead

May has a lot of big releases coming to streaming, with something for everyone. For Zack Snyder fans, there's the zombie thriller heist Army of the Dead out May 21 on Netflix. Lucifer fans can look forward to the return of season 5, also on Netflix, a week later on May 28. If you're looking for some dark animated shorts, Love Death + Robots is back for a second season on May 14 — once again on Netflix. We also have a new animated offering from the world of Star Wars: The Bad Batch, premiering May 4 (Star Wars Day) on Disney+ Hotstar. And for those craving more superhero action, Netflix has Jupiter's Legacy on May 7.

If it's big names you're after, Amazon will give you Anne Hathaway, Anthony Mackie, and Helen Mirren among others in Solos, arriving May 21. Amy Adams is The Woman in the Window on Netflix May 14. Ewan McGregor is Halston in Halston, also out May 14 on Netflix. Neena Gupta and Arjun Kapoor lead Sardar Ka Grandson, available May 18 on Netflix. Netflix's Master of None returns with short season 3 on May 23. And Oscar-winner Barry Jenkins gives us The Underground Railroad, rolling into Prime Video on May 14.

With that, here's our May 2021 guide to Netflix, Disney+ Hotstar, Amazon Prime Video, Zee5 and Apple TV+.

When: May 4
Where: Disney+ Hotstar

Star Wars veteran Dave Filoni, who created Star Wars Rebels and Star Wars Resistance, is back with another animated series that serves as both a sequel spin-off to The Clone Wars series. It follows Clone Force 99, a group of elite clone troopers equipped with unique skills — although they were part of the same cloning process as the other troopers, mutations make each of them different — taking on missions in the aftermath of the Clone Wars.

With Filoni (and Jon Favreau) shepherding the Star Wars cinematic universe with The Mandalorian, The Book of Boba Fett, and Ahsoka (which Filoni is writing), Star Wars: The Bad Batch is in the hands of his frequent collaborator Jennifer Corbett (as head writer) and Brad Rau (as supervising director).

It will kick off with a special 70-minute episode (on Star Wars Day) and continue weekly every Friday with three new episodes.

When: May 7
Where: Netflix

Four years after it acquired comic book publisher Millarworld, Netflix delivers its first superhero adaptation that follows the second generation of superheroes as they struggle to live to up the legendary ideals established by their superpowered parents. Josh Duhamel, Ben Daniels, and Leslie Bibb headline the cast.

When: May 7
Where: Netflix

Soni director Ivan Ayr's next feature is the story of a recently bereaved, middle-aged truck driver Ghalib, who is coping with a personal tragedy and the consequences thereafter, while facing the existential threat of losing his job to a young recruit. The events in the story come together as Ghalib's truck touches the 500,000-kilometre mark, a record at his company. Milestone premiered at last year's Venice Film Festival to positive reviews.

The second season finds mostly everyone back in office as they get to work on a new expansion of their Raven's Banquet game, but tensions are brewing between creative director Ian Grimm (Rob McElhenney) and the newly promoted co-creative director, Poppy Li (Charlotte Nicdao). The head writer C.W. Longbottom (F. Murray Abraham) deals with his past, exec producer David Brittlesbee (David Hornsby) loses his assistant Jo (Jessie Ennis) to Brad Bakshi (Danny Pudi), and game testers (Ashly Burch and Imani Hakim) try out an office romance.

When: May 13
Where: Netflix

The 10-episode fourth season will be the end of the adult anime — in the teaser, the scheming Carmilla (Jaime Murray) vows to “take everything from everybody” — though Netflix has plans to expand the Castlevania universe with a new series following a different bunch of characters. Series creator Warren Ellis won't be involved due to sexual misconduct allegations; he had finished Castlevania season 4 scripts before he was taken off the project by Netflix.

Mumbai ACP Rajveer “Radhe” Shikawat (the mightily-controversial Salman Khan) who operates by his own rules — in Bollywood, that's code for police brutality — is brought in to help put an end to a drug syndicate run by the city's wealthiest individual (Randeep Hooda). And because it's as Bollywood as it gets, Radhe will also simultaneously attempt to woo Diya (Disha Patani). If the movie is anything like the trailer, it will be absolutely horrendous and unwatchable.

Prabhu Deva (Dabangg 3) directs what is officially billed as a remake of the 2017 Korean crime action film The Outlaws.

Originally slated to open on Eid last year, Radhe was delayed due to the ongoing coronavirus pandemic. With COVID-19 still wreaking havoc across India, Zee Studios has decided to opt for a day-and-date release in theatres (wherever they are still open somehow) and on streaming. Zee5 annual subscribers can watch Radhe once, and the movie is also available via video-on-demand on ZeePlex through Zee5 and direct-to-home TV providers.

When: May 14
Where: Disney+ Hotstar

The adult animated anthology — from Tim Miller (Deadpool), Jennifer Yuh Nelson (Kung Fu Panda 2), and David Fincher — returns for a second season (titled Volume 2) that will be split into two halves of eight episodes. The first half, made up of shorts ranging from 4–15 minutes, feature a combat pilot (Michael B. Jordan), killer robotic servants, a Christmas demon, and a dead naked giant. Miller and Yuh Nelson serve as directors on two separate shorts.

When: May 14
Where: Amazon Prime Video

The Woman in the Window

Amy Adams is the titular woman who is afraid of being outside her home — honestly, this is something we can all relate to right now — but then finds her life unravelling after she claims her neighbour disappeared under mysterious circumstances. Did it really happen? Or was she hallucinating?

Technically a Disney movie (under 20th Century's outgoing Fox 2000 label), but the studio opted to sell it to Netflix after a yearlong delay thanks to COVID-19.

When: May 18
Where: Netflix

Determined to fulfil the last wish of his fun-loving grandmother (Neena Gupta) who had to leave behind her Lahore home during the Partition, the US-return grandson (Arjun Kapoor) decides to relocate the home to Amritsar — and naturally runs into a litany of problems involving religion, the border, and mountains of red tape. Aditi Rao Hydari plays a younger version of Gupta's character, and Rakul Preet Singh plays Kapoor's love interest.

Army of the Dead

When: May 21
Where: Netflix

After a four-hour Justice League, Zack Snyder is back with a zombie heist thriller that finds a group of mercenaries plotting the greatest casino heist in a post-apocalyptic Las Vegas that is riddled with “smarter, faster, and more organised” zombies — including zombie tigers! Wait, so it's Ocean's 11 with zombies? I mean sure, that's one way to think about it. Here, the assailants have a timer on their head too: they must finish the job before Las Vegas is nuked by the US government in 32 hours.

Watch the Army of the Dead Trailer in English and Hindi

When: May 21
Where: Amazon Prime Video

Anne Hathaway, Anthony Mackie, Constance Wu, Dan Stevens, Helen Mirren, and Uzo Aduba are among the stars who will each lead an episode of this seven-episode anthology series that aims to explore what it means to be human. We don't know much about Solos, and that's on purpose, creator David Weil (Hunters) has said. All he will say is that they are “long-form monologues” designed in a way so it feels like the actor is speaking just to the viewer.

When: May 23
Where: Netflix

Ansari and Waithe co-wrote all five episodes in Master of None season 3, with Ansari also directing each episode.

When: May 28
Where: Netflix

The fifth and penultimate season of the Tom Ellis-led fantasy series wraps up with the second half of eight episodes, following a mid-season finale — spoilers ahead for Lucifer season 5 part A — that saw God (Dennis Haysbert) himself descend to Earth in an attempt to stop the fight between Lucifer (Ellis), his twin brother Michael (Ellis), their older brother Amenadiel (D.B. Woodside), and the turned-ally Maze (Lesley-Ann Brandt).