Selection Day, You vs. Wild, The Perfect Date, and More on Netflix in April 2019 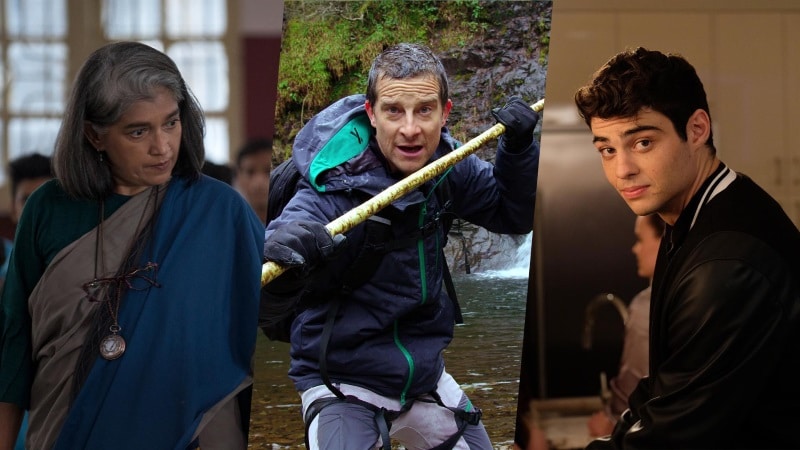 (L-R): Selection Day, You vs. Wild, The Perfect Date

After a big March, Netflix is looking at a much quieter April in India. For what it's worth, there's a couple of local originals just as last month, in Manav Kaul-starrer indie film Music Teacher and the second season of the critically-panned cricket drama Selection Day premiering on April 19. Internationally, we have the return of Chilling Adventures of Sabrina and Netflix's take on BBC's Planet Earth — Our Planet — out on April 5, Bear Grylls' interactive series, You vs. Wild, arriving April 10, and Noah Centineo (To All the Boys I've Loved Before) in a new rom-com called The Perfect Date, releasing April 12.

Meanwhile, Captain Marvel buddies Brie Larson and Samuel L. Jackson will be seen in Unicorn Store on April 5. The Netflix film was in fact made before the Marvel superhero movie — it premiered at Toronto International Film Festival in 2017 — but it's now only making its way to the public. Kill Bill star Uma Thurman is the highlight star of a young adult horror series, Chambers, out April 26. And if you're interested in some world originals, Netflix's first Turkish series — The Protector — will return for its second season on that day as well.

With that, here are our nine picks for April 2019 that you should watch out for, and the full list of movies and TV shows coming to Netflix India after that.

Christian Bale, Amy Adams, Bradley Cooper, Jennifer Lawrence, and Jeremy Renner lead the cast of this black comedy from director David O. Russell (Silver Linings Playbook). It's about two con artists (Bale and Adams) who are forced to work with an FBI agent (Cooper) and set up a sting ploy that would ensnare mobsters and corrupt politicians.

Winner of five Oscars, including Best Picture and Best Actor for Russell Crowe, this Ridley Scott-directed film tells a moving story of a Roman general (Crowe) who loses everything — his family and rank —to end up as a slave and then seeks vengeance on the perpetrator (Joaquin Phoenix).

Kristen Stewart and writer-director Olivier Assayas were both praised for their work on this supernatural psychological thriller, in which a young woman (Stewart) — who works as a personal shopper for a celebrity in Paris — tries to communicate with her twin brother who recently passed away from a heart condition she too has.

Another Oscar winner for Best Picture, starring Mark Ruffalo, Michael Keaton, and Rachel McAdams as Boston Globe journalists in this based-on-a-true-story, which looks at their investigative team uncovered cases of systemic child sex abuse by multiple Roman Catholic priests in local churches. Their work won them a Pulitzer.

On his 21st birthday, a young English man named Tim (Domhnall Gleeson) is told by his father that the men in their family can travel in time, with one caveat: to places they have been before. Tim uses the ability to improve his love life and the lives of those closest to him, and gains a newfound appreciation for each day through pain and loss.

A Toy Story for arcades, wherein video game characters ditch their normal roles at night to socialise with each other, the titular "bad guy" of Fix-It Felix Jr. dreams of being a hero. Features the voices of John C. Reilly and Sarah Silverman. Its success — $471 million at the worldwide box office — spawned last year's smart and self-aware sequel.

One of the best American films of 2015, starring Christian Bale, Steve Carell, Ryan Gosling and Brad Pitt, and directed by Adam McKay (Anchorman), it expertly distilled the world of finance for easier understanding — with the help of people such as Margot Robbie and Selena Gomez — and displayed Wall Street's penchant for self-profit in a vicious loop that caused the 2007-08 global financial meltdown.

Here's the full list of all the new content coming to Netflix India in April 2019. We've marked Netflix Original titles in bold for your convenience.

April 10
Personal Shopper
The Ottoman Lieutenant
The Silence
You vs. Wild

April 12
Huge In France: Season 1
Mighty Little Bheem
Special: Season 1
The Perfect Date
The Protector: Season 2
Thackeray
Who Would You Take to a Deserted Island?

April 22
The Chronicles of Narnia: The Lion, the Witch & the Wardrobe
Pinky Malinky: Part 2
Wreck-It Ralph

Editor's note 11/04: Updated the release date for Selection Day: Part 2, which was quietly changed by Netflix.