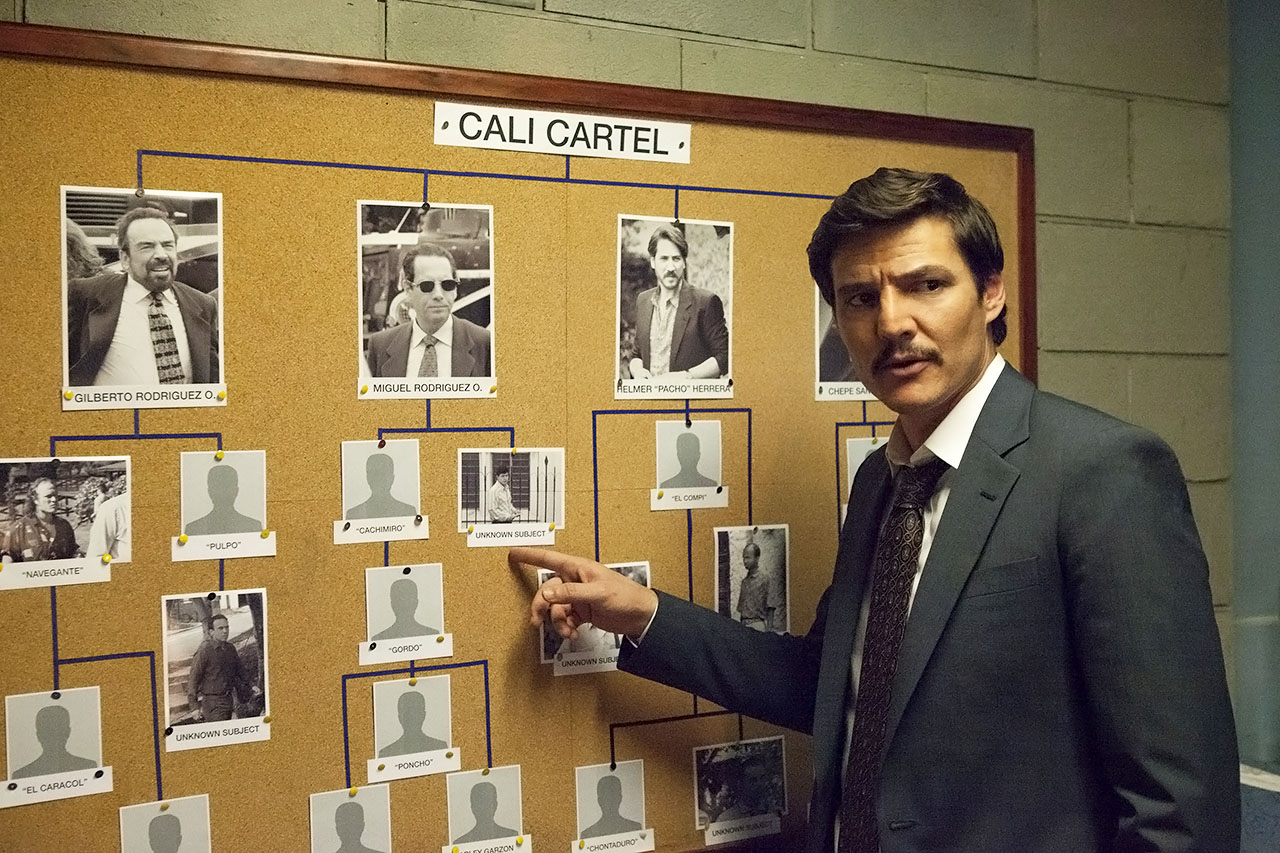 Over the weekend, Netflix dropped the first teaser for Black Mirror season 4, with episode titles for all six new episodes. They are ‘Crocodile’, ‘Arkangel’, ‘Hang the DJ’, ‘USS Callister’, ‘Metalhead’, and ‘Black Museum’. The clip has no dialogue whatsoever, except people reacting in fear or shock to their situation. It’s coming ‘soon’.

Marvel’s The Punisher – a spin-off of Daredevil starring Jon Bernthal – added Oscar nominee Shohreh Aghdashloo to its cast on Saturday. She’ll play a psychiatrist called Farah Madani, who’s the mother of Homeland Security agent Dinah Madani (played by Amber Rose Revah). Aghdashloo has previously worked Revah, and Punisher showrunner Steve Lightfoot, on HBO’s House of Saddam, which won her an Emmy. The Punisher is out later this year.

And then on Tuesday, Ed Skrein announced that he was exiting the Hellboy reboot, after finding out that the character he was going to play was Japanese-American. “It is clear that representing this character in a culturally accurate way holds significance for people, and that to neglect this responsibility would continue a worrying tendency to obscure ethnic minority stories and voices in the Arts,” Skrein said in a message on Twitter.

Later that day, EW revealed (spoilers ahead for The Defenders) the first look of Misty Knight’s (Simone Missick) bionic arm in Luke Cage season two. She lost her arm in the final episode of Defenders while trying to protect Colleen Wing (Jessica Henwick). While Iron Man gave her the bionic arm in the comics, it’s likely that Danny Rand (Finn Jones), being a billionaire, will help in this case. Luke Cage’s second season is out in 2018.

On Wednesday, Warner Bros. unveiled a short film called 2036: Nexus Dawn as part of the marketing campaign for Blade Runner 2049. Directed by Luke Scott – son of Ridley Scott – it stars Jared Leto and Benedict Wong as they discuss lifting the prohibition on replicants. Blade Runner 2049 is out October 6.

Steve Murphy (Boyd Holbrook) is out of the picture too, and that leaves DEA agent Javier Peña (Pedro Pascal) as he must figure out a way to take down the people stepping into the power vacuum opened by Escobar’s death. The entire season of 10 episodes is available in its entirety on Friday, as is usual with Netflix.

Fans of the series were wary how the show would move forward with its biggest character having departed, but critics have heaped praise on the third season. Indiewire’s Liz Shannon Miller called it “a series grounded in enough humanity to elevate what might otherwise be easily stereotyped storytelling.” Others have praised the work of Pascal, who they feel makes a more captivating narrator.

Other mentions:
The first two episodes of Marvel’s The Inhumans are out in IMAX theatres around the world, before its TV debut later in the month on ABC. Reviews aren’t available yet, and if the trailers are anything to go by, it’s going to be a massive disappointment. But if you’re a Marvel completionist, you might wish to check it out. It’s available in Bengaluru, Chennai, Mumbai, and Pune in India.

Baahubali 2: The Conclusion is now also on Hotstar, a few weeks after Netflix nabbed it. It’s available to free users of Hotstar too, though you’ll have to deal with ads.

Netflix is adding tons of new stuff to its service on Friday, including the Martin Scorsese-directed Gangs of New York, and Guy Ritchie’s The Man from U.N.C.L.E., starring Henry Cavill, Alicia Vikander, Armie Hammer, and Elizabeth Debicki. Check out the full list for the month of September to find something you like.

Video games:
Mario + Rabbids: Kingdom Battle
In Mario + Rabbids, Nintendo and Ubisoft bring together their respective properties for an unexpected encounter that offers turn-based combat and co-op challenges. After an accident involving the irreverent Rabbids, Mario, Luigi, Princess Peach and Yoshi must team up to bring order back to a splintered Mushroom Kingdom.

This journey will take them through four different worlds, all while they take on unpredictable enemies, and solve puzzles along the way. Made exclusively for the Nintendo Switch, Mario + Rabbids: Kingdom Battle retains the feel-good family factor of Nintendo games, and mashes it with modern combat styles.

We spoke with Ubisoft Milan creative director Davide Soliani on how the game came to be in its current form, and you can also read up on the different character and game modes. Reviews have been mostly positive for Mario + Rabbids, noting Ubisoft’s treatment of Mario, combat strategies, and the hilarity of the Rabbids.

There’s a new alien known as the Spectre too, which can create dark copies of XCOM soldiers.The DLC also has three new Hero classes to counter the Chosen – the Reapers, Skirmishers, and Templars – alongside new enemies, missions, environments and increased depth in strategic gameplay. Firaxis Games has also included the option to create your own resistance posters.

Like the main game, critics love what the expansion brings, noting it adds new depth in strategy and content, and terming it the best version of XCOM to date. Some feel the extra cost of the DLC is completely justified, given the amount of content it brings.

How to access: Steam for Windows PCs; September 12 on PlayStation 4, and Xbox One
Time commitment: 20+ hours

Life is Strange: Before the Storm
Set three years before the events of BAFTA Award-winning Life is Strange, Before the Storm puts you in the shoes of 16-year-old Chloe Price, a rebel who forms an unlikely friendship with Rachel Amber after meeting her at a concert in an old mill. While the game retains the episodic graphic adventure nature, there’s no time travel because Max Caulfield is not part of the story (a young version will appear in the bonus episode part of the Deluxe Edition).

But developer Deck Nine – taking over from Dontnod which is busy with role-playing title Vampyr – has hinted that Rachel will have some supernatural powers. Chloe’s abilities include “Backtalk”, which you can use to get out of situations, though it can have an undesired negative effect. The dialogue tree makes a return, and your decisions will affect outcomes.

The first of three episodes – titled ‘Awake’ – is now available. (Interestingly, the second episode is called ‘Brave New World’, a likely reference to Aldous Huxley’s 1931 book.) No reviews are currently available, so you’ll have to wait or make the decision yourself.

How to access: PlayStation 4, Xbox One, or Steam for Windows PCs
Time commitment: 1-2 hours per episode

Yakuza Kiwami
A year and a half on from the excellent Yakuza 0 prequel, Sega has given the original Yakuza (2005) as remake in Yazkuza Kiwami, which follows Kazuma Kiryu, the Dragon of Dojima. After spending a decade in prison for taking the fall for a crime his best friend committed, Kiryu is released only to discover a heavily changed world.

He must find his missing childhood friend as well as protect a girl named Haruka, who everyone seems to be after, with 10 billion yen reportedly in the mix. Kiwami is a high-def remake of the original, replete with new story depth, new side-quests (though much fewer than Yakuza 0), and updated combat mechanics.

We loved the updated version, including the story, combat, and visuals. It serves as a great way for English-language Yakuza 0 fans to continue their journey. The Tokyo open-world is refreshing change from most other titles, and characters such as yakuza leader Majima are a treat to witness.

Other mentions:
Absolver, the martial arts-focused action RPG from Sloclap, is now out on PS4 and PC. It’s getting decent reviews, and the combat is a mix of Dark Souls and Street Fighter, which sounds interesting. On the other end of the spectrum is Last Day of June, an interactive narrative-driven puzzle game about love and loss. It’s got nothing to do with the month of June – it’s actually set in autumn – and the game has some wonderful characters. Keep some tissues nearby.

The band released 11 minutes-long track #7 Thinking of a Place as a single back in April, before following it up with four more - Holding On, Strangest Thing, Pain, and Up All Night - in the months after. The first two of those five are the strongest on the new album, channeling the synth and heartland rock that they are known for.

With the likes of Strangest Thing, The War on Drugs show a softer and slower side to them, and it’s still as appealing. A Deeper Understanding is a wonderful ballad of love and loneliness throughout. It’s one of the best albums of the summer, and a definite one for rock fans to give a listen.