Mr. Robot, The Meyerowitz Stories, and More – The Weekend Chill 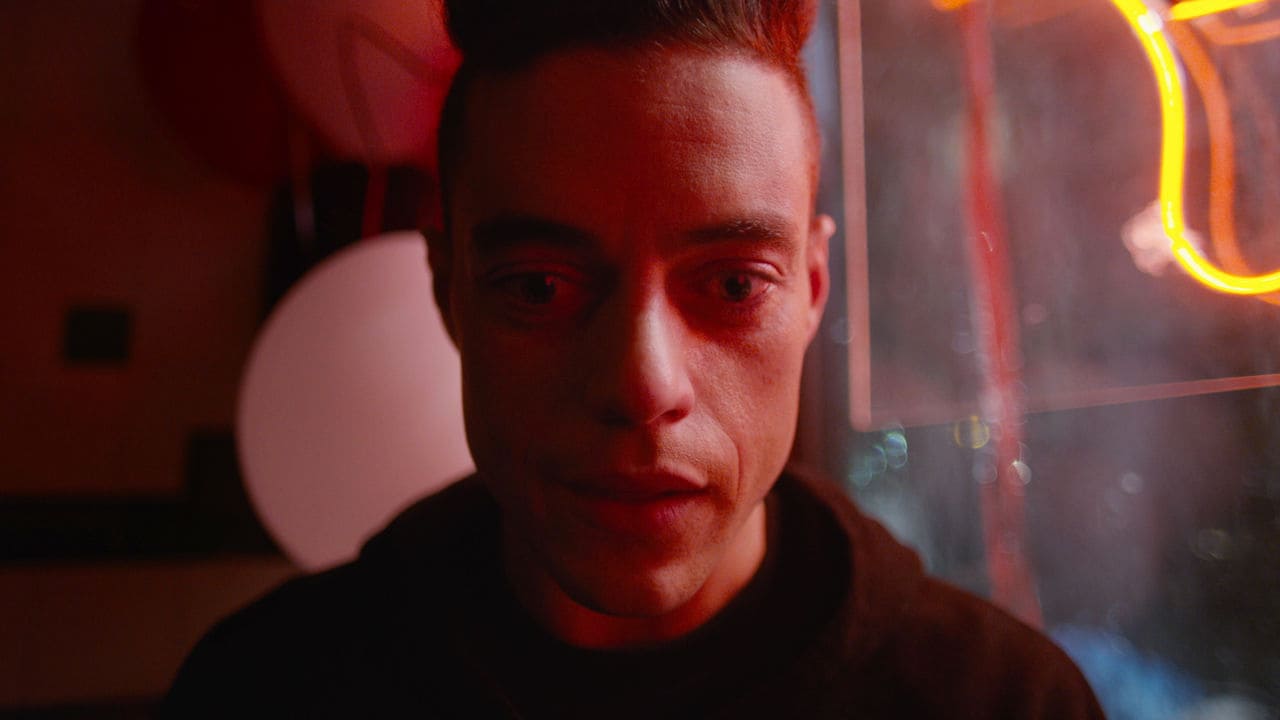 Last Friday, EW revealed that Danny Rand aka Iron Fist (Finn Jones) will be part of the second season of Marvel’s Luke Cage. He appears with a new haircut alongside Cage (Mike Colter), but we don’t know more about his involvement than that. It’s likely that he’s behind Misty Knight’s (Simone Missick) new bionic arm, but this signals a bigger arc than previously imagined.

Later that day, news of a potential Fast and Furious spin-off – starring Dwayne Johnson and Jason Statham – became official with a report from THR. Written by Chris Morgan, who has written nearly every chapter since Tokyo Drift, it has a release date of July 26, 2019, which has led to Fast and Furious 9 being pushed back to 2020.

Hulu released a trailer for Marvel’s Runaways over the weekend, which pushes the cliched idea of teenagers uniting against their parents to a logical extreme: what if they were secretly all supervillains? The show is set within the Marvel Cinematic Universe, and arrives November 21.

The first trailer for Pacific Rim: Uprising, the sequel to Guillermo del Toro’s 2013 original, debuted at New York Comic Con over the weekend. Set a decade after the events of the first film, it follows John Boyega as a Jaeger pilot, and the son of Idris Elba’s character. The film has a release date of March 23, 2018.

On Monday, we got a new trailer for Justice League, which further reveals the stakes faced by the quintet of Batman, Wonder Woman, Aquaman, The Flash, and Cyborg, with Superman still missing from action. There’s only a month left till release, with the DC blockbuster out November 17.

Sylvester Stallone will direct and produce the follow-up to Creed, a spin-off of his own Rocky franchise, the actor announced this week via an Instagram post. Michael B. Jordan (Black Panther) will return to reprise his role as Adonis Creed, and the film will begin shooting next year.

On Tuesday, Disney released the first full trailer for Star Wars: The Last Jedi, which focuses on the relationship between Rey (Daisy Ridley) and Kylo Ren (Adam Driver), and their intertwined fates. The eighth chapter in the space opera saga is out December 15.

Apple has scooped up the reboot to Steven Spielberg’s anthology series Amazing Stories as it looks to build out its original content offering. Bryan Fuller (American Gods) is on board as a producer, and the first season will have a total of 10 episodes. Apple and NBCUniversal will work on more projects going forward.

Fox's long-delayed X-Men spin-off Gambit has been given a new release date of February 14, 2019, though a director - most likely Gore Verbinski (Pirates of the Caribbean) - has yet to be confirmed. Channing Tatum has already been tapped to play the lead, in case you didn't know.

TV:
Mr. Robot
Having an unreliable narrator and protagonist at the centre has helped Mr. Robot deliver mystery and outlandish plots, but it’s a trick that Esmail must use with more finesse on the back of a second season that divided critics and fans. That aside, the show’s unique visual and aural flourishes, in combination with its action scene shooting and editing, keeps it interesting.

The third season raises the stakes even further, as evinced by the teaser, with New York seemingly engulfed in a state of emergency – you can see Times Square cordoned off, and sniffer dogs in the teaser – which has likely been brought about by the actions of our protagonist Elliot (Rami Malek) and Tyrell Wellick (Martin Wallström) at the end of season two.

Mr. Robot began its third season earlier this week, with an intriguing set-up that pits Elliot up against everyone. Bobby Cannavale joins the cast as Irving, while BD Wong’s Whiterose is now a series regular.

Mr. Robot Tries to Wrangle Its Place in Season 3 Premiere

Mindhunter
The Social Network director David Fincher’s second TV series – after House of Cards – is based on a book of the same name, which follows two FBI agents who solved murders by interviewing imprisoned serial killers and understanding how such criminals think and operate.

Set in the late 70s, it stars Holt McCallany (Sully) and Jonathan Groff (Frozen) as the two FBI agents, based on Robert K. Ressler and John E. Douglas respectively, with Anna Torv (Fringe) playing a psychologist based on Dr. Ann Wolbert Burgess. Fincher has directed the pilot, with the likes of Asif Kapadia (Amy), Tobias Lindholm (A Hijacking) and Andrew Douglas pitching in too.

Charlize Theron is an executive producer for the first season of 10 episodes. Early reviews paint a favourable view of the show, with critics noting Fincher's direction and the show's timeliness.

The film brings together its estranged family with a reunion of sorts, and focuses on the relationship between Hoffman’s artist father and his sons, half-brothers played by Stiller and Sandler. If you’re wondering whether Sandler’s presence means it’ll be a “Sandler film”, rest assured it’s the farthest thing from that.

The film has received universal acclaim, with praise also heaped on Sandler for his performance, as well as Baumbach’s handling of the story. Netflix picked up the film’s right prior to its Cannes premiere earlier this year, and it’s now available on the streaming service globally.

How to access: Netflix
Time commitment: 1 hour and 50 minutes

The Foreigner
Jackie Chan and Pierce Brosnan headline this new action-thriller from the director of Casino Royale (Martin Campbell), which tells the story of humble London businessman Ngoc Minh Quan (Chan), as a long-buried past reveals itself with a shocking act of terrorism, which claims the life of his teenage daughter.

Quan takes it upon himself to find out the identity of the terrorists, which puts him in direct conflict with British government official Liam Hennessy (Brosnan), whose own past as a former IRA member is crucial to the plot as well. Based on Stephen Leather’s 1992 novel The Chinaman, the film has been written by Enemy of the State scribe David Marconi.

Reviews have been fairly positive for the film, with Variety’s Peter Debruge saying the movie is “keenly aware of the West's long tradition of white-on-Asian racism”, and it tacitly inverts that idea on its head.

How to access: Out in cinema halls
Time commitment: 1 hour and 53 minutes

Baby Driver
Best known for his Three Flavours Cornetto trilogy – Shaun of the Dead (2004), Hot Fuzz (2007), and The World’s End (2013) – Edgar Wright began work on Baby Driver after dropping out from Marvel’s Ant-Man due to creative differences. Wright has called his new film “kind of like a musical”, which centres on a talented, young getaway driver (Ansel Elgort) who relies on a personal soundtrack in order to be the best.

The film has been heavily praised by almost all critics – it has a 97 percent fresh rating on Rotten Tomatoes – who appreciate the stylishness, writing, exciting car chases, Hamm and Foxx’s charismatic performances, Bill Pope’s cinematography, sharp editing, and of course, the soundtrack.

How to access: Amazon US, Amazon Video US, Google Play Movies, or iTunes IN
Time commitment: 1 hour and 53 minutes

The Beguiled
Sofia Coppola’s atmospheric remake of Don Siegel's 1971 adaptation of Thomas Cullinan's novel won her the Best Director award at Cannes Film Festival earlier in the year, and it’s now available on home media. Starring Nicole Kidman, Kirsten Dunst, and Colin Farrell, Coppola writes the story from the women’s point of view, as they take in an injured Union soldier during the US Civil War.

Set at a Southern girls boarding school, The Beguiled is a look at how a man’s presence fuels sexual tension and dangerous rivalries, as taboos are broken in an unexpected turn of events. Coppola’s deft touch as director and the extra depth of the story were noted as improvements on the source material.

Other critics weren’t convinced the film needed a remake, given it retold the same story with slightly more emphasis on the female empowerment angle. Coppola was also criticised for removing any trace of the African-American characters present in the book, and the original film.

How to access: Amazon US, Amazon Video US, Google Play Movies, iTunes US, or YouTube
Time commitment: 1 hour and 34 minutes

Other mentions:
There are a lot of TV shows that began their new seasons this week, including Crazy Ex-Girlfriend season 3, Riverdale season 2, and Jane the Virgin season 4 on the CW.

Meanwhile, Amazon has a new horror anthology series called Lore, based on the podcast of the same name. A total of six episodes are available Friday on Prime Video.

Netflix has more content too, including a documentary that looks at a mother and her seven children, whose father's suicide left them in financial ruin: Kingdom of Us. You should also check out our Netflix guide to October for more streaming options.

Video games:
Middle-Earth: Shadow of War
Set between the events of The Hobbit and The Lord of the Rings, developer Monolith returns to Middle-earth with a second game in the series, which continues the narrative of the ranger Talion and the spirit of the elf lord Celebrimbor, who shares Talion’s body. Together, they set out to forge a new Ring of Power to amass an army against Sauron.

Shadow of War has a bigger open world than its predecessor, and it builds upon the “Nemesis System” of the original, which allows you to gain followers from various races and plan out strategies for upcoming battles and missions. The game’s combat meanwhile has transitioned from a hack and slash approach to an action role-playing style.

The game has been muddled in controversy up to its release, including changing the monstrous spider Shelob into a female vixen type, alongside micro-transactions and loot boxes. If you can look past those annoyances, you’ll find Shadow of War to have a vibrant world with great personalities (orcs, especially) and a worth follow-up overall.

How to access: PlayStation 4, Xbox One, and Steam for PC
Time commitment: 25 hours

The Evil Within 2
The sequel to the acclaimed original comes from Shinji Mikami, which blends together survival horror with psychological thrills for a truly terrifying experience. This time, developer Tango Gameworks has focused more on the latter to tell a more personal story, which revolves around former detective Sebastian Castellanos as before.

At his lowest point after the events of The Evil Within, Castellanos is spending his days drinking before his partner returns to inform him that his daughter Lily isn’t dead as he thought. Instead, she’s a captive of Mobius, the shadowy group responsible for the destruction of Castellanos’ previous life.

Early reviews say the game is a commendable follow-up to the original, with a little novelty in the gameplay, interesting plot, and plenty of surprises. All in all, it's a must-play for fans of survival horror games.

How to access: PlayStation 4, Xbox One, and Steam for PC
Time commitment: Unknown at this point