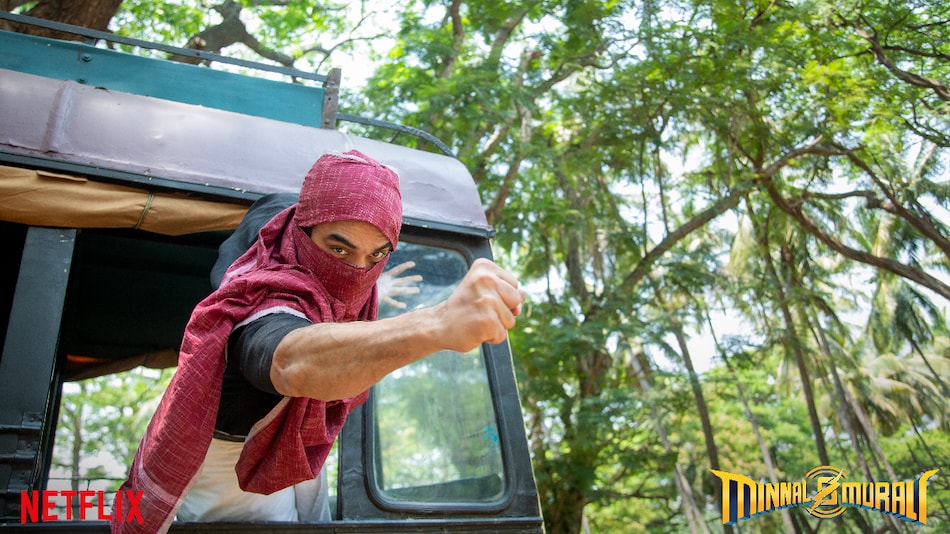 Minnal Murali, the much-awaited Indian superhero film, is finally beaming into our homes this week. The movie, which will be released via Netflix, is about the tale of Jaison, an ordinary man who becomes a superhuman after being struck by lightning. The movie stars Mollywood's heartthrob Tovino Thomas in the lead. Minnal Murali was shot in locations including Alappuzha and Wayanad in Kerala, and in Karnataka.

The Netflix superhero movie had made headlines in May last year after multiple right-wing groups destroyed an estimated Rs. 50-lakh set of Minnal Murali claiming the church set hurt their religious sentiments. The Antharashtra Hindu Parishad (AHP) and Bajrang Dal publicly claimed responsibility for the vandalism of the set which was near Adi Sankaracharya mutt in Kalady near Ernakulam in Kerala.

The film was set for a theatrical release during the latter half of 2020, but was postponed due to the ongoing COVID-19 pandemic. In September this year, Netflix announced that it had acquired Minnal Murali. Later that month, the subscription platform announced the Christamas Eve release date of the movie.

Minnal Murali premiered at the Mumbai Film Festival's year-round programme on December 16. Minnal Murali will be available Christmas Eve, December 24 on Netflix in India and around the world. The movie is 2 hours and 39 minutes long.

The Malayalam-language film will also have dubs in Tamil, Telugu, Kannada, Hindi, and English.

Money Heist, The Witcher, Lost in Space, and More on Netflix in December

Almost all of the new content gets released on Netflix at midnight Pacific Time with respect to Netflix HQ.

Therefore, Minnal Murali will start streaming on Netflix in India at 1:30pm IST on December 24.

Malayalam cinema's leading man Tovino Thomas stars as the protagonist Jaison, or the superhuman Minnal Murali. Talking about his role in the movie, Thomas said, “I've been attached and committed to the character of Minnal Murali from the very beginning. I spent all my time communicating with my director to ensure the best possible outcome and immense amounts of work went into creating Minnal Murali.”

An ensemble of versatile actors join him in pivotal roles including Guru Somasundaram as Shibu, Vasisht Umesh as Jaison's nephew Josemon who is interested in superheroes, and Aju Varghese as Jaison's brother-in-law and police constable Pothan.

The director of the movie Basil Joseph plays a cameo in the movie.

Minnal Murali is director Basil Joseph's third directorial venture after Kunjiramayanam (2015) and Godha (2017), for which he had collaborated with the lead actor Thomas.

“We wanted to create a superhero that people could relate to and connect with on an emotional level,” Joseph said in a prepared statement. “Though the essence of a superhero movie is the action, our genuine efforts were focused on having a strong narrative that could stand on its own while backing the action.”

The screenplay for the movie is by Arun Anirudhan (Padayottam, 2018) and Justin Mathew.

Minnal Murali is produced by Sophia Paul under the banner of Weekend Blockbusters. Talking about the movie, Paul said, “Our goal was to make Minnal Murali a well-rounded film and a family entertainer with something for everyone. Along with the story, it is the amazing cast who have all delivered surreal performances and the crew whose efforts will make people want to watch the film again and again.”

Cinematographer Sameer Thahir (Big B, 2007) wields the camera for Minnal Murali. Manu Manjith (Aanandam, 2016) is the lyricist, Shaan Rahman (Take Off, 2017) and Sushin Shyam (Kumbalangi Nights, 2019) are the composers, Livingston Mathew (Adventures of Omanakuttan, 2017) is the editor, and Vlad Rimburg (Lucifer, 2019) is the action director.

Set in the 90s, Minnal Murali is an origin story of an ordinary man-turned-superhero Murali, who is struck by a bolt of lightning, which bestows him with special powers.

The bonus trailer shows glimpses of a village which has caught fire and is in chaos.

The songs of Minnal Murali can be streamed from Muzik 247's YouTube channel or any other music streaming platforms.

Ahead of its release, Minnal Murali published a creative ad campaign in the Malayalam daily Malayala Manorama.

In the first strip that appeared on December 20, the desi superhero is shown helping a person who was unjustly assaulted by the police. Minnal Murali appears with a clap of thunder and throws in a few stunts.

Another one showed him helping Thunder woman who took a wrong turn to land in Kurukan Moolaland. Murali comes to help with his bicycle and helps her find her way.

Minnal Murali to Atrangi Re, What to Watch in December

The first reviews of Minnal Murali are available Wednesday, following the lifting of the review embargo at 1:30pm IST.

The Gadgets 360 review of Minnal Murali will be out later this week.

Here is the official poster of Minnal Murali from Netflix: