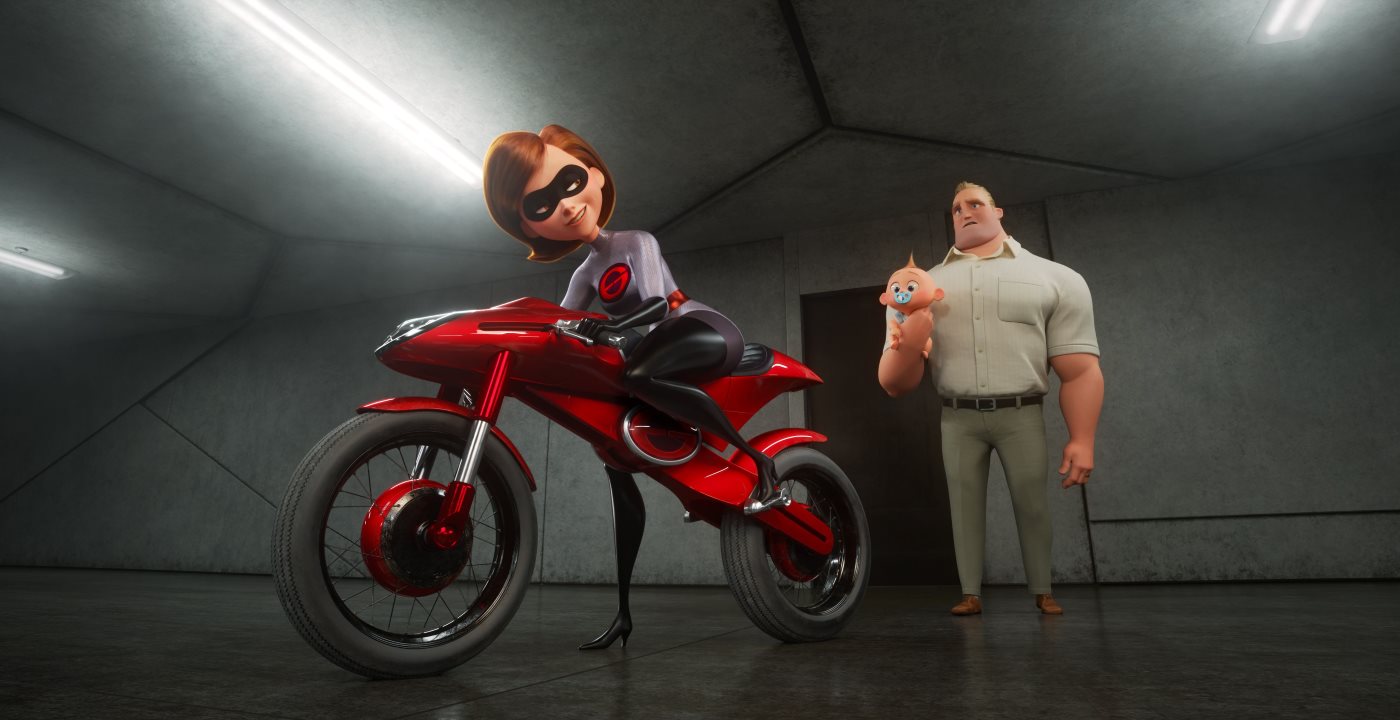 Last Friday, Apple announced that it had signed a multi-year deal with Oprah, which will include original programmes “that embrace her incomparable ability to connect with audiences around the world”.

Incredibles 2 had a terrific first weekend in the US, grossing $180.2 million, which makes it the highest opening for an animated film. Internationally, things were quieter because it has a staggered rollout: the Pixar sequel released in India and China this week, with Brazil, France, the UK, South Korea, Japan, Spain, Italy, and Germany to follow in the coming months.

On Tuesday, CBS announced that it had signed a five-year extension with recently promoted Star Trek: Discovery showrunner Alex Kurtzman, who will oversee all Trek TV projects. One of those apparently might bring back Patrick Stewart as Captain Jean-Luc Picard.

In the wake of John Lasseter stepping down from Disney-Pixar owing to misconduct allegations, Disney said on Tuesday that his interim replacements – Jennifer Lee (Frozen) and Pete Docter (Inside Out) – will take over as creative heads at Disney and Pixar, respectively.

There was more Disney news on Wednesday, with the company upping its Fox bid to $71.3 billion (Rs. 4.86 lakh crores) after Comcast had stepped into the game. Disney will also take on Fox’s net debt of $13.8 billion, which brings the total transaction to $85.1 billion.

Also on Wednesday, THR reported that Kristen Wiig would be dropping out of the Apple comedy she signed on, due to scheduling conflicts with Wonder Woman 1984. Meanwhile, Apple signed a new deal with Sesame Workshop later that day, to produce kids’ shows for its as-yet unannounced streaming service.

Rumours were swirling this week that Lucasfilm has decided to pause development on Star Wars spin-off films in the wake of Solo’s commercial failure, though the studio maintains that multiple films not yet announced are moving forward.

TV
Marvel’s Luke Cage
After a short-lived stint with The Defenders, and nearly two years since his debut on Netflix, Harlem’s bulletproof black hero – Luke Cage (Mike Colter) – returned this week on Netflix with a second season. Having been exonerated, Luke is now a free man and a minor celebrity in his neighbourhood, which results in both fame and criticism.

His previous archenemy Mariah (Alfre Woodard) is still around, and there’s a new guy in town, Bushmaster (Mustafa Shakir), who’s looking for vengeance because of some bad blood between their families in the past. Danny Rand (Finn Jones) and Colleen Wing (Jessica Henwick) guest star, Gabrielle Dennis plays Tilda Johnson, while Misty (Simone Missick) and Shades (Theo Rossi) return.

As is the case with Netflix, all 13 episodes of Luke Cage season 2 are available Friday. Having seen the entire season, we can tell you it suffers from a sophomore slump. The show suffers from Marvel-Netflix’s usual pacing problems, with the story unnecessarily stretched across 13 hour-long episodes. If you’re a fan of MCU series on Netflix, try watching the first few hours and see whether you like it.

Bob doesn’t know what’s in store for him, given the Parr family isn’t aware of Jack-Jack’s emerging superpowers unlike the audience. Meanwhile, Helen is stretched (excuse us) beyond her limits in dealing with the new villain, who seeks to turn the public against superheroes for life. Samuel L. Jackson returns to voice Frozone, and Bob Odenkirk, Catherine Keener, and Jonathan Banks are also part of the voice cast.

Incredibles 2 has gotten great reviews from most critics, including us. We loved the action sequences and the endless number of laughs in the script, with Jack-Jack playing a part in most of the latter. Thanks to a frenetic pace, amazing work of composer Michael Giacchino, and a welcome spin on the stereotypical family dynamic, Incredibles 2 is a success for Bird and Pixar.

Incredibles 2 Is Here and It's Excellent

How to access: Out in cinema halls
Time commitment: 1 hour and 58 minutes

Written and directed by Gary Ross (The Hunger Games), Ocean’s 8 follows the younger, estranged sister of Danny – Debbie Ocean (Bullock) – who gets out of prison and decides to return to a life of crime because that’s what she does best. She ropes in her former partner-in-crime Lou (Blanchett), and together they assemble a crew to plan a heist at the annual Met Gala.

The film has received average reviews. The Atlantic’s Christopher Orr said it “floats along amiably on the tide of its stars' charisma and the capable if uninspired direction of Ross”, while IndieWire’s Kate Erbland felt the heist was “like a third-tier Soderbergh joint” despite “a cool backdrop and a daring idea”, which is “temporarily bolstered by the same jazzy music and quick cuts” but “carried out with considerably less energy”.

How to access: Out in cinema halls
Time commitment: 1 hour and 50 minutes

Hereditary
Writer-director Ari Aster makes his feature debut with this terrifying horror film, in which a family begins to slowly discover cryptic secrets about their ancestry after the death of their reclusive matriarch. As they realise what has befallen them, they struggle to escape the fate that seems to have been passed down from the grandmother.

Toni Collette (Little Miss Sunshine) plays the daughter whose mother passed away, Gabriel Byrne (The Usual Suspects) plays her husband, and they have two kids: a teenage son (Alex Wolff) and an adolescent daughter (Milly Shapiro). Hereditary premiered at Sundance in January, released in the US earlier in June, and it’s now out in theatres across India.

Reviews have been terrific. LA Times’ Justin Chang said: “With breath-taking deliberation and quiet, unshowy mastery, he spins a devastating portrait of an American family in sudden, inexplicable decline.” The Playlist’s Jordan Ruimy noted the film has “an almost meditative-like sensation, as you feel every space you’re in” and “continuously reinvents itself at every turn”.

How to access: Out in cinema halls
Time commitment: 2 hours and 7 minutes

The Death of Stalin
Veep creator Armando Iannucci approaches this momentous occasion in the history of Russia through the lens of black comedy and political satire, basing his story on the French graphic novel La mort de Staline. The film depicts the power struggles that ensue following the death of dictator Joseph Stalin in 1953, and how his core team of ministers tussle for control, with the main aim being their own survival.

The film stars Steve Buscemi as Nikita Khrushchev, Jeffrey Tambor as Georgy Malenkov, Jason Isaacs as Georgy Zhukov, Andrea Riseborough as Svetlana Stalina, and Olga Kurylenko as Maria Yudina among others. The Death of Stalin operates quite loosely with the facts, and has been banned in Russia, where some have said it promotes “ethnic and social inferiority” and disparages the memory of Russian World War II fighters.

Critics have been extremely positive in their reviews. The Guardian’s Peter Bradshaw said it was “superbly cast, and acted with icy and ruthless force by an A-list lineup”, and that “fear rises like gas from a corpse in Armando Iannucci's brilliant horror-satire”. Vox’s Alissa Wilkinson called it the director’s “most complex and almost nihilistic rendering of what politics is: A team of bumbling and weak-minded people who lack any real conviction other than a desire for power and position”.

How to access: Amazon Video US, Google Play US, iTunes US, or Microsoft Store US
Time commitment: 1 hour and 47 minutes

Other mentions
While Brad Bird’s Incredibles 2 hits theatres, one of his other works Ratatouille – often considered his best – is now available on Netflix. This week, Netflix also added the first three seasons of Adventure Time (there are a total of 10), Captain America: The First Avenger, and Ken Burns’ critically-acclaimed 10-part 17-hour docuseries The Vietnam War.

It was a quiet week elsewhere. Amazon Prime Video added the 2017 firefighter drama Only the Brave, while Hooq now has all episodes of Seth Rogen’s sci-fi comedy Future Man, starring The Hunger Games’ Josh Hutcherson.

Video games
The only notable release this week was the arrival of Mario Tennis Aces on the Nintendo Switch. Alongside playing tournaments and one-off games, there’s also a story mode this time around – the first in a Mario Tennis game since the GBA era – which includes missions and boss battles that put a spin on the tennis formula. It’s gotten good reviews, with a 78 score on Metacritic from 35 publications.

Mario Tennis Aces for Nintendo Switch Is Tougher Than It Looks

Music
Everything is Love by The Carters
Out of the blue last Saturday, wife-husband Beyoncé and Jay-Z – ‘Carter’ is their last name – dropped a surprise collaborative album – Everything is Love – on the latter’s co-founded streaming service Tidal, along with dropping a music video that was shot in Paris’ Louvre, for the album’s second track and lead single “Apeshit”.

The full nine-track record features guest appearances from Migos, Offset, Quavo, Rory from Stone Love, and Ty Dolla $ign. And unlike with Beyoncé’s album Lemonade, the Tidal exclusivity for Everything is Love ended on Monday, with the album now available across all major music platforms. Notably, Spotify is limiting access to premium members until July 2.

Most critics are happy with the debut effort. Pitchfork’s Briana Younger called it a “celebration of resilient black love and proud black extravagance” in how the two “extend an invitation to join their very public vow-renewal victory lap”, while The Guardian’s Alexis Petridis said their bragging of wealth isn’t as interesting, but “at least it’s usually done with real wit and spark”.