The Crew 2, GLOW, Westworld, and More – The Weekend Chill 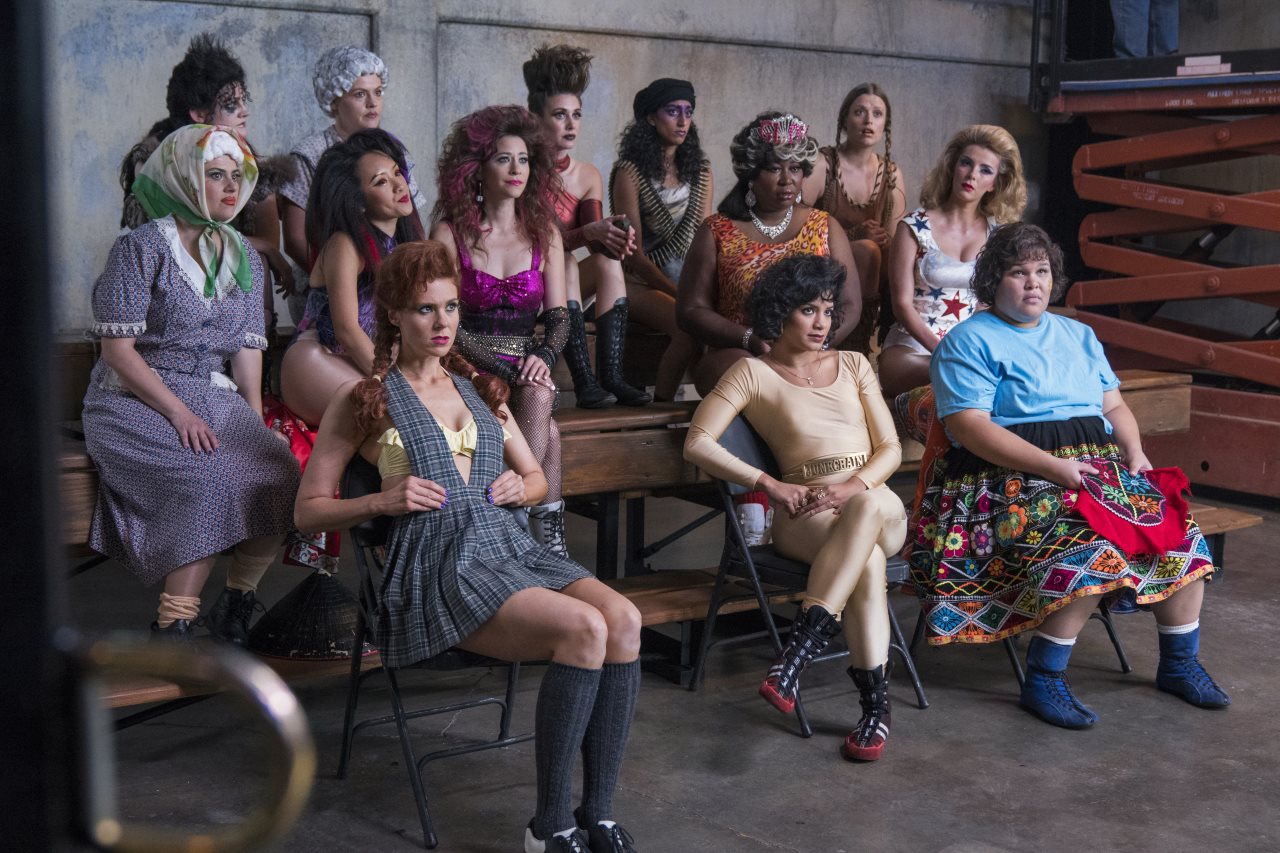 On Tuesday, Netflix announced it had signed on Mark Wahlberg and director Peter Berg to make an adaptation of Robert B. Parker’s Wonderland from author Ace Atkins. Later, Fox released a full-length trailer for The Predator from director Shane Black, out September 14. And finally, Jeremy Irons (Justice League) is now part of the cast for HBO’s Watchmen series from Damon Lindelof.

On Wednesday, The Hollywood Reporter brought word that Jared Leto had agreed to play Morbius The Living Vampire in another Spider-man spin-off in development at Sony Pictures. Leto confirmed it in a tweet, which makes this the second comic book character he’ll play after The Joker.

Later that day, Deadline reported that Jessica Jones star Krysten Ritter would helm an episode in the show’s third season, which has already begun filming. This means the gap between seasons 2 and 3 will be much shorter than the over-two-year gap we had between seasons 1 and 2.

On Thursday, we got a teaser trailer for Netflix and Matt Groening's new animated show, Disenchantment. Netflix also announced a series adaptation for Salman Rushdie novel Midnight's Children on Friday, alongside Showtime green-lighting a 10-episode first season for its long-gestating Halo show.

TV
GLOW
Netflix’s 1980s’ Los Angeles-set original, focused on the (fictionalised) story of the eponymous women’s wrestling promotion – the Gorgeous Ladies Of Wrestling – is back for a second season on Friday, welcoming Yolanda aka Yo-Yo (Shakira Barrera) into the bunch of struggling actors training as wrestlers to make a campy TV show that will draw eyeballs to the over-the-top sport.

The second season also finds the women of GLOW becoming local celebrities and dealing what comes with that fame. And while the two leads, Ruth (Alison Brie) and Debbie (Betty Gilpin), get used to making TV together, they still have lingering friendship issues to deal with. Elsewhere, Sam’s (Marc Maron) teenage daughter Justine (Britt Baron) comes to live with him.

Variety’s Caroline Framke said it’s more rewarding than season 1 now that “the clichés of their origin stories [are] firmly behind them” and “throws in more jaw-dropping stunts and mines its potential to become just as spunky, tenacious and determined as its heroines”, while The Hollywood Reporter’s Tim Goodman remarked how it’s “immensely enjoyable even when it wasn't firing on all cylinders” and praised the ensemble cast.

Westworld
After a gap of sixteen months since the season one finale, Westworld – the HBO sci-fi series created by husband-wife duo Jonathan Nolan and Lisa Joy, inspired by Michael Crichton’s 1973 film of the same name – returned in April for round two. The show picked up where it left off with the android-hosts turning on their human masters, just as the park’s co-founder Robert Ford (Anthony Hopkins) wanted.

The series aired its season finale last Sunday, providing answers for the disparate timelines and revealing a big twist, and then proceeding to confound with newer mysteries. Westworld season 2 continued to be weird escapism into an alternate world, while giving us a couple of hours – especially “Kiksuya”, the episode focused on Akecheta – that drove its primary themes of consciousness and free-will.

How to access: HBO or Hotstar
Time commitment: 10 hours

A Very English Scandal
Hugh Grant (Notting Hill) and Ben Whishaw (Skyfall) star in this three-part miniseries charting the 1970s Jeremy Thorpe scandal in the UK, in which Liberal Party leader and Member of Parliament Jeremy Thorpe (Grant) became the first British politician to be charged with conspiracy to murder his former lover, a stable-boy named Norman Scott (Whishaw), in order to protect his political career.

Having had a successful run a few weeks ago in the UK, the British drama enters new shores via Amazon’s streaming platform in the US, though an Indian presence is not yet confirmed. It’s been adapted from John Preston’s book of the same name, written by Russell T. Davies (Doctor Who), and directed by Stephen Frears (Florence Foster Jenkins).

Reviews are mostly positive. The Guardian’s Lucy Mangan called it “as brutally funny, endlessly clever, justifiably confident as its protagonist” which “entwines two decades of salient political history with a finely-worked portrait of the English establishment”. The Telegraph’s Benji Wilson said it had “a spectacular ensemble” and though it “was raucously funny [at times], it maintained a bass note of menace throughout”.

How to access: BBC, Amazon Video US, or Amazon UK
Time commitment: 3 hours

Movies
The Endless
After the 2014 Lovecraftian horror Spring, a favourite of Guillermo del Toro’s, co-directors Justin Benson and Aaron Moorhead released another horror flick last year – a sci-fi thriller that follows two brothers (Bensor and Moorhead) who receive a cryptic video message inspiring them to revisit the UFO death cult they escaped a decade earlier – that never made it to Indian theatres.

Confronted with unexplainable phenomena around the camp and an upcoming mysterious event, the brothers reconsider the cult’s beliefs and attempt to unravel the seemingly impossible truth. Having premiered at the 2017 Tribeca Film Festival and post a US release in April this year, The Endless is now available on Blu-ray and digital.

The Endless has great reviews, with a 96 percent fresh rating on Rotten Tomatoes from 81 critics. The AV Club’s Katie Rife praised “Moorhead's skill as a cinematographer, [and] also the judicious way in which he and Benson apply their presumably limited budget”, while LA Times’ Noel Murray noted the “naturalistic acting” and said it makes “great use of an eerie Southern California landscape”.

How to access: Amazon US, Amazon Video US, Google Play US, iTunes US, or Microsoft Store US
Time commitment: 1 hour and 51 minutes

Other mentions
In the world of streaming, Netflix added Disney’s 1998 animated hit Mulan earlier this week, and the Tom Hanks-starrer Sully arrives Saturday.

Video games
The big game this week is Ubisoft’s The Crew 2, the open world racer that lets you explore (a lot of) the US in a car, boat, or plane. But since Ubisoft hasn’t given advance copies to members of the press, there aren’t any proper reviews available. You’ll have to decide for yourself or wait a couple of days before jumping in. The Crew 2 is available on PC, PS4, and Xbox One.

The other important release this week was The Awesome Adventures of Captain Spirit, a free-to-play addition to the Life is Strange universe following a young boy named Chris. The decisions you make in the new game will reflect in the upcoming Life is Strange 2. It’s gotten good reviews – a 77 score on Metacritic from 21 publications – and is available on PC, PS4, and Xbox One.

Music
Heaven and Earth by Kamasi Washington
Less than a year since his last album, 37-year-old Los Angeles-born jazz saxophonist Kamasi Washington is back with a third record that rivals his debut – 2015’s The Epic – in its length, running close to two and a half hours across two volumes and 16 songs in total. It contains his takes on Bruce Lee’s movie theme “Fists of Fury” alongside riffs on Miles Davis and invoking John Coltrane elsewhere.

The new album features contributions from Tony Austin, Ronald Bruner, Jr., Brandon Coleman, Cameron Graves, Terrace Martin, Miles Mosley, Patrice Quinn, and Thundercat. Reviews have been terrific for Heaven and Earth, with The New York Times’ Giovanni Russonello noting the “balance between big-stroke conceptualism” and “the workmanlike reality of collaboration”, and adding the quality is “a testament to the sturdy rapport of Mr. Washington’s ensemble.”

Writing for Pitchfork, Nate Chinen called it “a multi-genre feast of musical ideas, his most sweeping and complete statement yet” and concluded: “Washington’s strengths have never been clearer. His sound is sinewy and centered, his rhythmic footing sure. And he’s a catharsis engine who also knows when to shrewdly dial it back.”