Four More Shots Please! Meet the Leading Ladies of the Show With an All-Women Crew 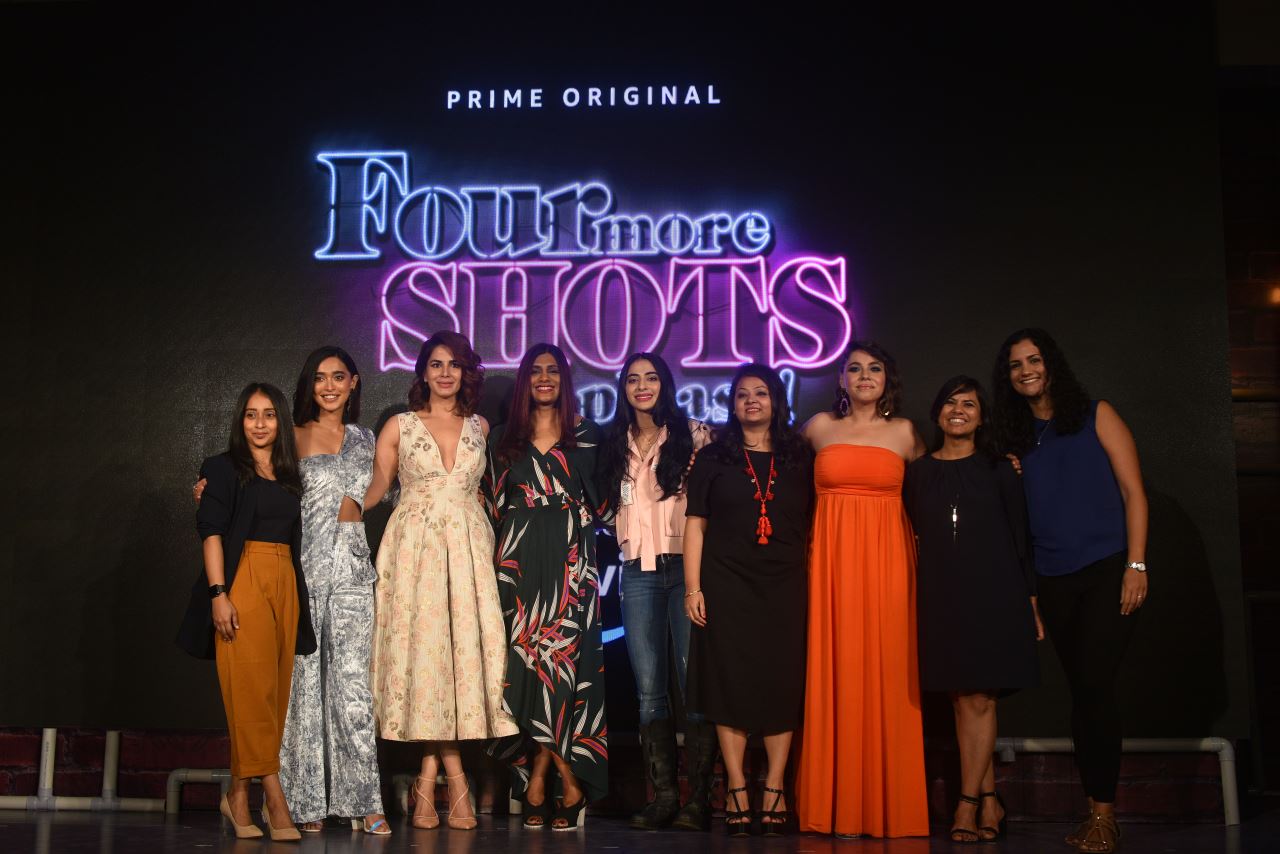 The cast and crew of 'Four More Shots Please!' at an event in Mumbai

Four More Shots Please!, Amazon Prime Video's first original comedy series from India, might be vastly different from everything it has done before — which has been a mix of drama, thriller, and reality TV — but there are obvious international parallels to its premise. Think of the midway point between HBO's Girls and, well, HBO's Sex and the City, and set the whole thing in SoBo, the New York-styled abbreviation for south Bombay. But it's also notably different from its counterparts. Fittingly for a show in today's time, Four More Shots Please! has been made by a largely all-female crew, something that's nigh impossible to find even in Hollywood.

Gupta says with a laugh that it led to fantastic noise levels on set, with her co-star Kirti Kulhari (Pink) — who plays a single mother named Anjana Menon — remarking that it was a miracle that they managed to pull off sync sound, wherein sound recorded on location is used for the final cut instead of the routine Bollywood practice of having actors re-record their lines afterwards in a studio, a process that's usually known as dubbing. Jokes aside, having a mostly all-women crew had several advantages, according to the lead quartet of ‘Four More Shots Please!'.

“With the sex scenes, it takes a lot for us — even the boys — to feel safe to be able to do those scenes and I think having a female crew added to that comfort to a great extent,” Kulhari adds. There's no frontal nudity here though, because Amazon's contracts don't allow it, unlike Netflix's. “It also brought up my confidence in the show overall, because you didn't have a bunch of so-called losers,” — Gupta lets out a chuckle upon hearing the word — “or frivolous people sitting down and writing the show about so-called four independent women. You had a bunch of women who know what they are doing, [and] who are here to tell a story in the most honest way that they know of.”

That reflects in the characters you see on-screen with Four More Shots Please!, who are flawed in their own ways and don't fall into the neatly-categorised stereotypes that Bollywood is all too well-known for. Gupta says that having women at the helm helps marks a huge shift in terms of how women are seen, as “real people” just “as real as men”.

“Shocking,” her co-star Bani J — best known for hosting MTV Roadies, the TV presenter and fitness model plays the latter, a semi-autobiographical version of herself called Umang Singh, on the new Amazon series — adds in a sarcastic fashion. It might feel like the most obvious thing, but it is ‘shocking' given the lack of female voices across the entertainment industry globally.

“When you see the portrayal of women in cinema, especially Indian cinema, there are always looked at through a certain lens,” Gupta tells Gadgets 360. “And god knows why that is, because either women are almost virginal or they are like vamps, if they have a mind of their own. I used to get asked this question a lot, ‘Oh, you have done such bold roles.' And I hate the word bold because ‘bold' is basically a woman who has a mind of her own.”

Maanvi Gagroo (Pitchers, Tripling), the fourth and final lead of Four More Shots Please! — who plays Siddhi Patel, a virgin trying to get out from under her mother's thumb — calls it a “backhanded compliment”.

Gupta says that the fact that it “represents women as real authentic women, as we are in our day-to-day lives” is her favourite part of the show.

“I was so glad Damini came my way, because it's one of the best characters I have read on paper, and I was just so excited that I finally got the opportunity to play a part which is so nuanced and layered, and so different from anything I had played before,” she adds. And it almost didn't happen for most of them for varying reasons. Gupta recalls how turning down a supporting role led to the opportunity for her lead role.

“Honestly, I really liked the script but for me, at that time, I was like ‘It's about four girls, why should I do a smaller part when I can play one of the protagonists?' I said no, and eight months after that — thank god I had said no — on January 1, 2018, I got a call from Rangita, and I was actually quite surprised why she's calling me. I picked up the phone and said, ‘Nice of you to call, happy new year.' And she's like, ‘What are your dates like for the next three months?'”

Kulhari, on the other hand, was hesitant to play the role of a mother, because of how the industry tends to typecast actors, especially women. Once you're a mother in Bollywood, there's usually no going back. “That's one big reason I could have said no to the show, [but] I'm glad better sense prevailed at the right time, thanks to all the people around me. That was one aspect where I was like, ‘Uh uh, should I be doing this?'”

For Gagroo, it was the rich collaborative process she shared with the creator, director, and writers that convinced her to sign on. She recalls how she drove them nuts with intense back-and-forth discussions, exchanging long mails in which she went through the script line-by-line and told them, “This is what I don't like, this is what the alternate line could be, and all those things. And then, fortunately, 98 percent of the things they agreed to, and they made it according to what I would be comfortable with.”

“I felt that with Siddhi initially, while the attempt of the makers was to not body-shame her as a character, but somehow the lines — and again, it's something we take for granted — there was a bit of humour about it which I thought was body-shaming. Maybe it's not blatantly shaming but there was [an undercurrent of] that. And I felt that. When I read it, I said, ‘I thought we were standing up for body positivity, so why are we doing this?' And they were like, ‘Oh yeah, you're right.'”

Bani concurs on the collaborative aspect, though the only discussion she had with Nandy and Menon was regarding a crucial scene for Umang, where she talks about her sexuality. Her character Umang is bisexual. “I wasn't very comfortable with the way the words were coming out of my mouth,” Bani explains. “I sat with them and said it a couple of times, and Anu [Menon] was like, ‘How would you say this?' And I just, in a very conversational manner, said this is what I would say. She goes, ‘Say that.'”

On set, she remarks she was surprisingly nervous about the kissing scenes with her male co-stars than those with the same sex: “[Because] I have to have a conversation with him. Let me tell you where to put your hands.” Gupta think it's usually easier with women, because “you are just more comfortable with the body and there is no sexual tension”, before Bani chimes in with a characteristic joke: “You also know it's going to work.”

“And I think sexually — again this is gender-stereotyping but — women aren't creepy,” Gagroo says. She's not the only one with that opinion. American comic Iliza Shlesinger used that as the basis for a (viral) bit in her 2018 stand-up special, Elder Millennial, in which she jokes that women are also always welcome around kids because of that reason. Gagroo adds: “Even if you're making out with a lesbian actor, she may hit on you later, but you know that person is not going to be sleazy about it. With a guy, you never know, it can go either way.”