Fallout of a murder, depressive alcoholic, bold women, cat-and-mouse, and end of a rom-com. 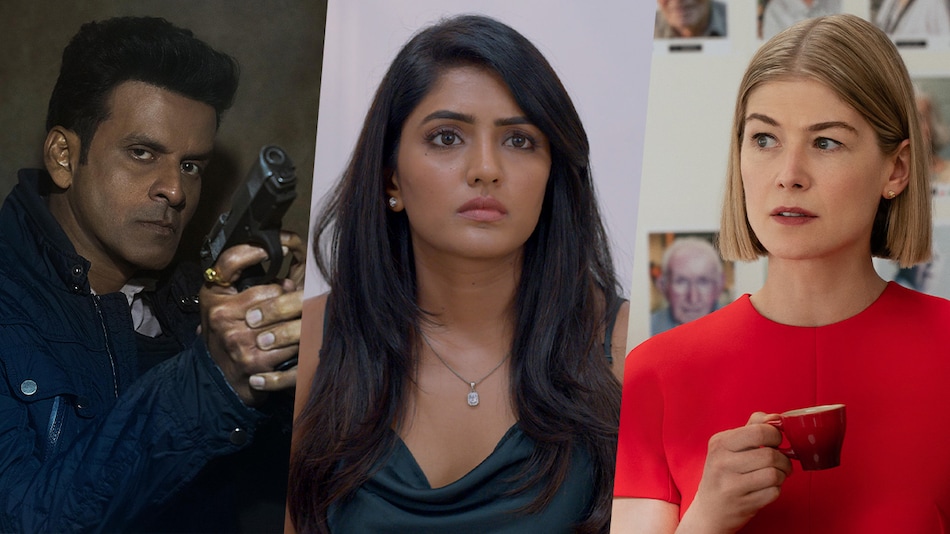 Manoj Bajpayee in The Family Man, Eesha Rebba in Pitta Kathalu, Rosamund Pike in I Care a Lot

The return of Manoj Bajpayee's (missing) agent in Amazon's The Family Man was set to be the highlight of February's local streaming picks, but it's been delayed to summer 2021 following controversies surrounding Amazon's Tandav. In its absence, Amazon has secured the Malayalam-language sequel Drishyam 2. Netflix, meanwhile, has Parineeti Chopra in The Girl on the Train, and the Telugu-language anthology film Pitta Kathalu leading its February. And lastly, we've 1962: The War in the Hills, a Hotstar Specials series based on the Sino-Indian War.

Internationally, Tom & Jerry will deliver some rollicking fun on the big screen (that will also stream on the US-exclusive HBO Max). Netflix's popular To All the Boys trilogy also wraps up in February. And there are other titles that involve the likes of Zendaya, Salma Hayek, Joel Kinnaman, Rosamund Pike, and Cathy Yan.

To All the Boys 3, The Girl on the Train, and More on Netflix in February

There are several ongoing series from January too, including the likes of WandaVision, Riverdale, and Dickinson, which haven't been named below. With that, here's our February 2021 guide to Netflix, Amazon Prime Video, Disney+ Hotstar, Apple TV+, HBO Max, Colors Infinity, and Mubi.

When: February 3
Where: Netflix

Katherine Heigl and Sarah Chalke play the adult versions of lifetime best friends in this series based on Kristin Hannah's book of the same name, which follows them as young girls living on Firefly Lane who wish to grow up to be famous journalists — but only of them actually does. That becomes a bone of contention as adults, as does a shared love interest. The TV show follows them from a small-town to Seattle in north-western America.

When: February 5
Where: Amazon Prime Video

Salma Hayek and Owen Wilson star in this sci-fi drama from writer-director Mike Cahill — his first film in seven years — about a middle-aged man (Wilson) who keeps dreaming about a stranger (Hayek). When he finally runs into her outside of his dreams, she tells him he's living in a virtual world — à la The Matrix — that she had a hand in building. From there, it's pure chaos.

When: February 5
Where: Netflix

John David Washington (Tenet) and Zendaya (Spider-Man: Homecoming) play the titular leads in this film from Euphoria creator Sam Levinson that was shot during the lockdown in a house with a tiny crew. It centres on one evening when a filmmaker (David Washington) awaits reviews on his latest movie, and how his relationship with his girlfriend (Zendaya) is tested as revelations about their relationship surface.

When: February 5
Where: Apple TV+

With Apple the home for all things Peanuts, a new animated series about the world's most extraordinary beagle is on its way to celebrate 70 years of the comic strip. On The Snoopy Show, he is a surfer king, the hippest kid in school, a famed arm wrestler, and a World War I flying ace.

When: February 9
Where: Colors Infinity

Jefferson Pierce has seemingly given up his Black Lightning gig in the fourth and final season of the DC series, if the trailer is to be believed. That comes in the wake of — spoiler alert for the end of season 3 — the death of his long-time detective friend Bill Henderson (Damon Gupton) in the fight to stop Markovia from conquering Freeland. What will prompt him to take it up again?

When: February 12
Where: Mubi

Before she was given the reins to Birds of Prey, director Cathy Yan made her directorial debut with this Shanghai-set social satire about life in China—growing wealth inequality and social change set amidst a backdrop of globalisation—that won a jury prize at Sundance Film Festival in 2018. Three years later, Dead Pigs is finally getting a global release, directly on streaming.

To All the Boys: Always and Forever

When: February 12
Where: Netflix

It's a wrap on the trilogy with this third and final chapter — based on the 2017 novel “Always and Forever, Lara Jean” — which finds LJ (Lana Condor) reassess her relationship with boyfriend Peter Kavinsky (Noah Centineo) as high school draws to a close and during two trips she takes: a road trip to a university and another to Korea with her grandmother and sisters.

When: February 19
Where: Amazon Prime Video

Set six years after the events of the original, the sequel to the high-grossing 2013 Malayalam movie (which was remade by Bollywood in 2015) is going straight to streaming thanks to the ongoing COVID-19 pandemic. It's been a quick turnaround for Drishyam 2, which began filming back in September last year.

The main cast of Mohanlal, Meena, Ansiba Hassan, and Esther Anil are returning to reprise their respective roles. The Drishyam 2 trailer suggests that the past is going to catch up to the family.

When: February 19
Where: Apple TV+

Battlestar Galactica creator Ronald D. Moore's alt-history space race drama picks up a decade later in 1983 for its second season, with the US and USSR at the peak of their powers. NASA isn't a space organisation anymore, with the US Department of Defense moving into their building. Yes, you know what that means: astronauts with guns.

I Care a Lot

When: February 19
Where: Netflix

Rosamund Pike is channeling Gone Girl vibes in this black comedy thriller about a crooked elder care guardian who defrauds her aging clients for her financial gain. She meets her match in the newest client (Dianne West) who's carrying some baggage that leads to a fight with a mob boss (Peter Dinklage). Eiza González and Chris Messina co-star. J Blakeson (The Disappearance of Alice Creed) writes and directs.

When: February 19
Where: Netflix

Netflix's first Telugu-language movie is a four-part anthology, as was the case with its first Tamil-language film Paava Kadhaigal. Producers Ronnie Screwvala and Ashi Dua Sara transfer the format they used in Bollywood — with Lust Stories and Ghost Stories, both for Netflix — to South India, once again.

The iconic cat and mouse duo return to the big screen after nearly thirty years — 1992's Tom and Jerry: The Movie was the previous feature — with this hybrid live-action / animated adventure set in New York City against the backdrop of a grand Indian wedding. The premise involves the two duking it out as always, before realising they have a shared enemy in the deputy hotel manager (Michael Peña). Chloë Grace Moretz, Rob Delaney, Ken Jeong, Colin Jost, and Pallavi Sharda co-star.

When: February 26
Where: Disney+ Hotstar

Abhay Deol leads the troops in this jingoistic look at the 1962 Sino-Indian War that claimed the lives of 1,300-4,900 Indian soldiers. On Republic Day on Instagram, Deol posted the first look with the caption: “What better occasion than today to salute all those brave hearts who fought to protect the motherland.” Mahesh Manjrekar directs.

The Girl on the Train

When: February 26
Where: Netflix

Parineeti Chopra leads this Bollywood adaptation of Paula Hawkin's 2015 thriller novel which retains its original British setting, unlike the 2016 Emily Blunt-led Hollywood movie that transferred the events to America. It's an interesting choice, for it tasks Indian actors to put on a British accent, given they are playing non-resident Indians who live in the UK. Aditi Rao Hydari, Kirti Kulhari, and Avinash Tiwary star alongside.