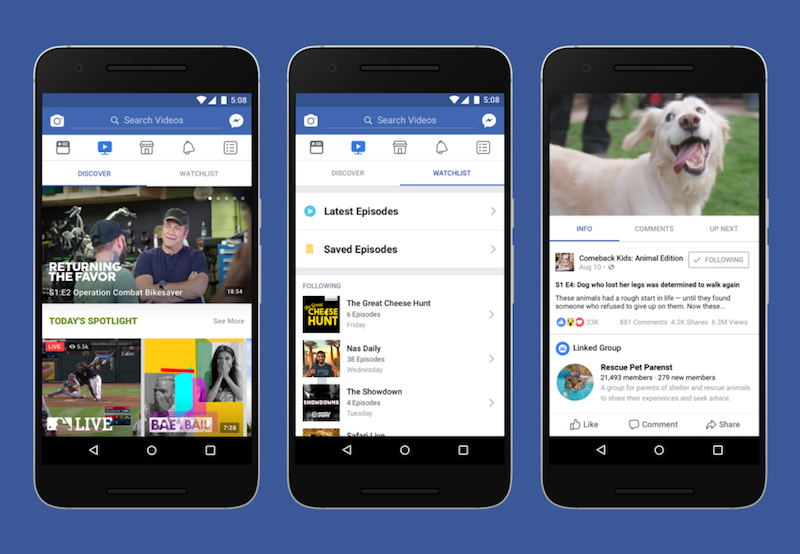 Facebook envisions its new Watch feature as TV designed for social media, a place where users comment, like and interact with show creators, stars and each other - and never leave.

It's a potential threat to Twitter, YouTube, Netflix and other services for watching video, including old-fashioned TV. Yet its success is far from guaranteed.

While people watch a lot of videos on Facebook, these are mostly shared by their friends, seen as users scroll down their main news feed.

Getting people to see Facebook as a video service is like Walmart trying to sell high fashion, or McDonald's peddling high-end food, said Joel Espelien, senior analyst with The Diffusion Group, a video research firm.

Sure, it's possible, but something is off.

"It's very difficult to change people's core perception of what your brand is," he said.

Facebook has already had a special video section, but it mainly shows a random concoction of "suggested" videos. The new Watch section replaces this. Some US users got Watch on Thursday; others will get it over time.

The idea behind Watch is to let people find videos and series they like, keep up with them as new episodes appear, and interact with the show's stars, creators and other fans. People's own tastes, as well as those of their friends, will be used to recommend videos.

Daniel Danker, a product director for video at Facebook, said the most successful shows will be the ones that get people interacting with each other.

"Live does that better than almost anything," he said.

Facebook wants to feature a broad range of shows on Watch, including some exclusive to Facebook. Users who already follow certain outlets, say, BuzzFeed, will get recommended shows from those pages.

But Espelien wonders whether Facebook users will tap (or click) the Watch tab when with another tap of the finger they can "click over to Hulu or Netflix or whatever."

Though Facebook might want you to think otherwise, Espelien said there's no boundary keeping you from straying.

Advertising details are still being hashed out, but typically the shows will have five to 15-second ad breaks. Facebook said show creators will decide where the ads go, so they can be inserted during natural breaks.

But it might be a tough sell for advertisers used to a predictable, reliable audience that television has had, Forrester Research analyst Jim Nail said in an email. Facebook's big challenge, he said, will be to train users "to establish a Watch habit."

Jio Effect: Aircel Offers 168GB Data, Unlimited Calls for 84 Days at Rs. 419 in Northeast, at Rs. 449 in J&K
Amazon Said to Be in Talks to Offer Event Ticketing in the US