Dunkirk, Raazi, Robin Williams: Come Inside My Mind, and More – The Weekend Chill 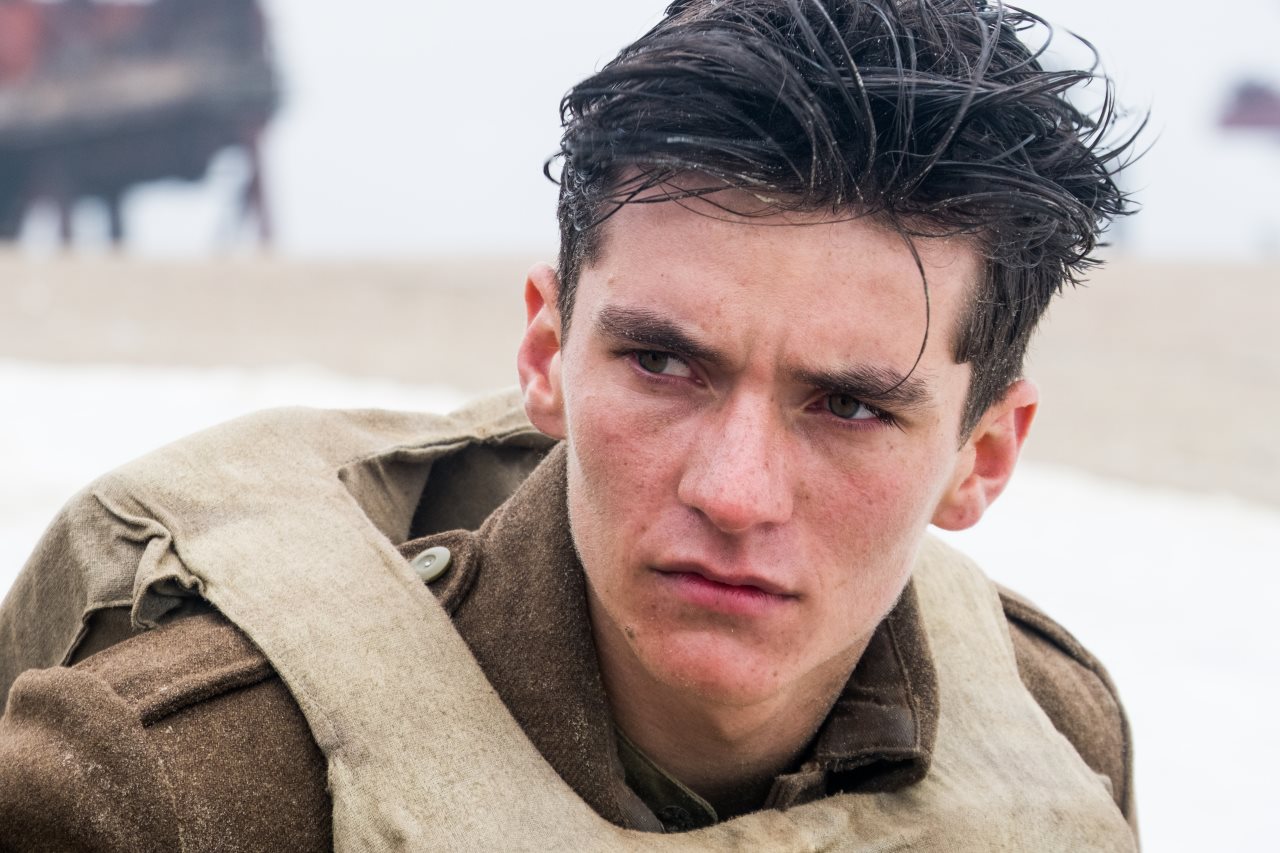 Last Friday, HBO announced that it had signed a deal with Joss Whedon for a new sci-fi series called The Nevers. Whedon will write, direct, executive produce, and serve as showrunner. No premiere date or episode count has been set yet.

Over the weekend, we got an unexpected Uncharted short film starring Nathan Fillion, pleasing fans of the franchise who have wanted to see the Firefly and Castle alum in the role for years.

On Monday, Deadline brought word that Timothée Chalamet was in final talks to play the lead in Denis Villeneuve’s Dune, based on Frank Herbert’s epic sci-fi novel series.

Netflix announced a total of five film and TV projects based on Mark Millar comic titles on Tuesday. Meanwhile, The CW has put a Batwoman series in development, which would make it the first live-action superhero series with an openly gay lead.

On Wednesday, Warner Bros. announced that it had set a release date for its Joker origin movie: it’ll be out October 4, 2019.

San Diego Comic-Con kicked off on Thursday, bringing trailers, release dates, and surprises with it. We got a first look at Doctor Who with Jodie Whittaker, the return announcement of Star Wars: The Clone Wars animated series, a new trailer for George R.R. Martin's Nightflyers, and a date reveal for Iron Fist season 2.

TV
Robin Williams: Come Inside My Mind
The life and career of the actor-comedian best known for films such as Dead Poets Society (1989), Disney’s animated Aladdin (1992) and Good Will Hunting (1997) is the focus of this HBO documentary, which arrives nearly four years since his death, having taken his own life in 2014 while suffering from Lewy body dementia and a misdiagnosis of Parkinson’s disease.

Featuring interviews with the likes of Billy Crystal, David Letterman, Whoopi Goldberg, Steve Martin, his first wife Valerie Velardi, and his son Zak Williams, the documentary – directed by Marina Zenovich, known for her biographical docs – also includes clips and outtakes from Robin Williams’ stand-up routines. Come Inside My Mind premiered at Sundance in January and released to public earlier this week.

Variety’s Owen Gleiberman said the director “offers just what you want from a documentary like this one: She brings us closer to events that have been covered many times, deepening — or overturning — what we think we know about them.” TheWrap’s Alonso Duralde thinks it “achieves a balance between celebration and unfiltered recollection” thanks to interviewees who go deep “into their memories of Williams”.

How to access: HBO or Hotstar
Time commitment: 1 hour and 56 minutes

Movies
You Were Never Really Here
Joaquin Phoenix won Best Actor at last year’s Cannes Film Festival for his role as a traumatised veteran and a hired gun who tracks down missing girls kidnapped into sex slavery for a living. The film is based on Jonathan Ames’ book of the same name, and has been written and directed by Lynne Ramsay (Ratcatcher, Morvern Callar, We Need to Talk about Kevin), who shared the screenplay award at Cannes.

Phoenix’s character is hired by a New York senator, and he finds himself trying to survive in a tangled web of corruption and his own nightmares after the job spins out of control. You Were Never Really Here was released in France last year, followed by the UK and the US earlier this year. An Indian release doesn’t seem to be on the cards, but it’s now available on Blu-ray and digital.

The film has received great reviews. Empire’s Ian Freer called it “dark, disturbing and difficult” and “a deep dive into a troubled headspace [that] never lets you leave”. Variety’s Guy Lodge called Ramsay one of the greatest working filmmakers and said the film is “a stark, sinewy, slashed-to-the-bone hitman thriller far more concerned with the man than the hit”.

How to access: Amazon US, Amazon Video US, Google Play US, iTunes US, or Microsoft Store US
Time commitment: 1 hour and 29 minutes

Disobedience
Barely months since his Oscar win for A Fantastic Woman, Chilean director Sebastián Lelio is back with another LGBTQ drama, starring Rachel Weisz, Rachel McAdams and Alessandro Nivola, which has been adapted from Naomi Alderman’s 2006 novel of the same name. The film follows a woman (Weisz) who returns home to her orthodox Jewish community after the death of her father.

Complicating matters is a traumatic past: she was attracted to a childhood friend of the same sex and was shunned for it by the community. That friend (McAdams) is now married to her cousin, but their passions reignite upon seeing each other, and the two rekindle a romance. Though it hasn’t been received as well as his previous efforts, Disobedience has been praised for its exploration of the boundaries of faith and sexuality.

LA Times’ Kenneth Turan noted that Lelio’s style “is restrained but potent, which helps the impact of the actors' performances as well as the picture's fairly graphic love scene”. EW’s Leah Greenblatt called it “a quietly profound exploration of identity, sacrifice, and the connection all human beings long for, whether or not their God or their family or their community approves”.

How to access: Amazon US, Amazon Video US, Google Play US, iTunes US, or Microsoft Store US
Time commitment: 1 hour and 54 minutes

Dunkirk
After directing sci-fi and superhero epics including Interstellar, Inception, and The Dark Knight Trilogy, Christopher Nolan returned last year with a World War II story about the evacuation of British and Allied troops from the French city of Dunkirk. Trapped on the beach with their backs to the water, the soldiers are put in an impossible situation as Nazi forces close in.

Off a script Nolan wrote himself, and shot using IMAX and 65mm film cameras, Dunkirk unfolds via three non-linear perspectives on land, sea, and air. The British Royal Air Force fight in the skies to protect their counterparts below, while hundreds of small boats – both military and civilian – help mount a rescue effort, risking their lives to help save as many as they can.

Raazi
Based on former Indian Navy officer Hirander S. Sikka’s novel, Calling Sehmat, which was inspired by real events, Raazi follows a young Kashmiri woman named Sehmat Khan (Alia Bhatt) who agrees to step into her spy father’s shoes in accordance with his last wishes, and marries a Pakistani military officer (Vicky Kaushal) during the Indo-Pakistani War of 1971.

Directed and co-written by Meghna Gulzar – whose previous feature was 2015’s critically-acclaimed Talvar, based on the true story 2008's Aarushi Talwar double-murder case – Raazi explores Sehmat having to balance her arranged marriage and coming to grips with the spy business, while maintaining the dual cover and passing information that could swing the war.

The film has been well-received by most critics, with praise directed towards Bhatt’s work and a script that rarely goes overboard, though some found its spy work improbable. Firstpost’s Anna MM Vetticad called it “a poignant story of human relations”, and Indian Express’ Shalini Langer said “a film like Raazi needs to be made […] when hate and anger are the currency of the subcontinent”.

Other mentions
Both Wynonna Earp and Killjoys begin their newest seasons Friday on Syfy. There aren’t any reviews available for either, but if you’ve been following them, here’s your reminder to tune in. Meanwhile, UnReal started its fourth and final season Monday on Hulu.

If you’re looking for streaming options, check out our Netflix guide for July.

Video games
Sega released an expanded version of its 2017 hit this week in Sonic Mania Plus, featuring additional characters in Mighty the Armadillo and Ray the Flying Squirrel as well as remixed levels, a pinball bonus stage, a four-player competition mode, and a reworked Metal Sonic battle. The physical copy comes with a 32-page art book. Sonic Mania Plus has gotten favourable reviews with a weighted 87 score from 17 critics on Metacritic. It’s available on Nintendo Switch, PS4, and Xbox One.

Music
Ordinary Corrupt Human Love by Deafheaven
Three years on from their previous effort, San Francisco-based Deafheaven are back with their fourth full-length album in Ordinary Corrupt Human Love, having released two singles – “Honeycomb” and “Canary Yellow” – in the past few months. The new album further pushes them toward the so-called blackgaze sound, a portmanteau of black metal and shoegazing.

Ordinary Corrupt Human Love has great reviews, with an average weighted score of 88 from 21 publications on Metacritic. The Guardian’s Lanre Bakare noted hints of post-rock and ambient on the album too, and said “each transition from black metal to indie via shoegaze and soft rock is so carefully handled [that] the result is a heady mix that sees the band reach new heights that are powerful and aggressive yet subtle and disarming”.

Writing for Consequence of Sound, TJ Kliebhan noted “moving, emotional pieces and sharp performances bolstered by a band clearly stretching out of its comfort zone successfully”. “It’s difficult to imagine another metal band opening their album with a track that belongs on a ’70s piano pop ballad record and managing to give it some teeth,” he concluded.

Lamp Lit Prose by Dirty Projectors
Formed in 2002, Brooklyn, New York-based Dirty Projectors have seen a long list of lineup changes in their sixteen years as an indie rock band, with frontman and guitarist David Longstreth being the only one who’s been there right since the start. Released last Friday, Lamp Lit Prose is their eighth album, and features guest appearanmces from Dear Nora, Empress Of, Haim, Amber Mark, Fleet Foxes' Robin Pecknold, Rostam, and Syd of The Internet.

The album has gotten favourable reviews. NME’s Thomas Smith termed it “a marvellous return to form for an act that possesses such unbridled creative energy” and Dirty Projectors’ “most intriguing and joyous album since 2009's breakthrough Bitte Orca”. He also thinks it’s their “most accessible work to date, and rarely do these vibrant pop songs outstay their welcome”.

AllMusic’s Mark Deming also noted “a palpable joy in this music that hasn't been so strong in Longstreth's work” since Bitte Orca and an optimistic tone “reinforced by the percolating rhythms, the breathy harmonies, and the angular enthusiasm of the guitar work”. And despite the several contributions from other artists, it’s “very much Longstreth's music” that is “heartfelt, passionate, and beguiling”.