Ant-Man and the Wasp, Amazon's Comicstaan, and More – The Weekend Chill 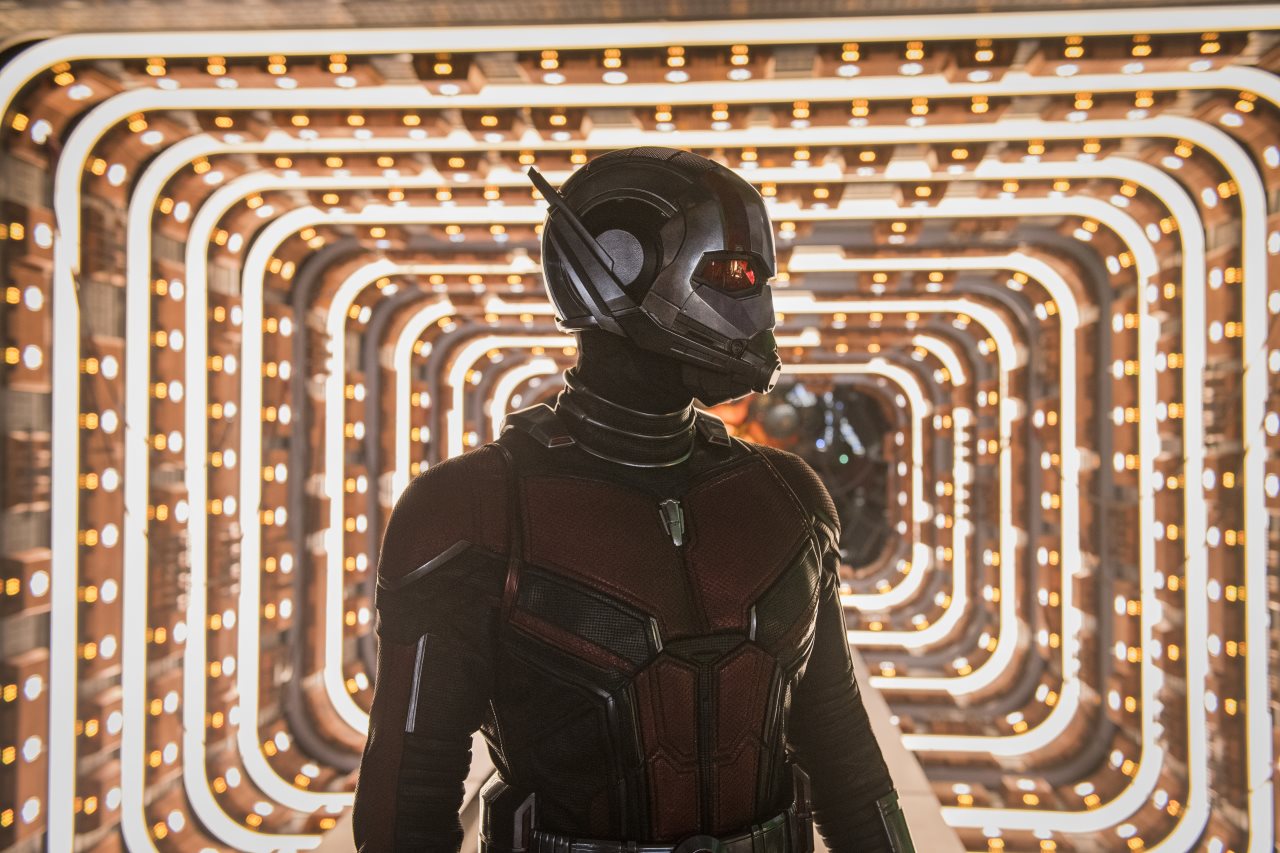 Also on Friday, Spider-Man and Doctor Strange co-creator Steve Ditko passed away. He was 90.

On Monday, Netflix provided a release date for its second Indian original series Ghoul starring Radhika Apte – it’s out August 24 – and then followed it up with a trailer on Tuesday.

On Tuesday, a new THR report said that Joaquin Phoenix had finalised a deal to play the lead in the Joker origin movie, which has been in the works since last year.

On Wednesday, Deadline revealed that District 9 director Neill Blomkamp will helm the next RoboCop movie. It’s called RoboCop Returns, and it’s both a reboot and a sequel to the original franchise.

The 2018 Emmy nominations were announced on Thursday. Game of Thrones leads the way with 22 nominations, while Netflix topped the list of networks with most nominations.

Lastly, THR said the Black Widow has found its director in Cate Shortland (Lore), having found a screenwriter at the start of the year.

Movies
Ant-Man and the Wasp
Less than three months on from Avengers: Infinity War, Marvel’s next film – its third and final for 2018 – is here already. Ant-Man and the Wasp is set in the aftermath of Captain America: Civil War, and prior to the events of Infinity War, with Scott Lang (Paul Rudd) struggling to balance his superhero responsibilities with his renewed dedication at home as a father.

Things get even more complex after Hope van Dyne (Evangeline Lilly) and her scientist father Dr. Hank Pym (Michael Douglas) arrive at his doorstep with an urgent new mission. As the title suggests, Ant-Man has backup with Hope as the Wasp, which means learning to fight as a team. Petyon Reed returns as director, and the film also stars Bobby Cannavale, Hannah John-Kamen, Judy Greer, Laurence Fishburne, Michael Peña, and Michelle Pfeiffer.

Ant-Man and the Wasp has favourable reviews from most critics, including us. We think it benefits from being small-scale (no pun intended), its family dynamics, and humour-driven action, though it does feel unnecessary as part of the big Marvel picture – like an elongated hour of television that doesn’t really carry any weight.

How to access: Out in cinema halls
Time commitment: 1 hour and 58 minutes

A Quiet Place
The Office’s John Krasinski has been showered with praise for his direction on this horror film, which starred him and his real-life wife Emily Blunt (Edge of Tomorrow, The Devil Wears Prada) as the parents in a family of four, who are some of the few survivors of blind monsters who hunt for victims by sound. Hence, they must life a live of silence out in the woods if they wish to survive.

Millicent Simmonds and Noah Jupe star as the two children in the family, one deaf and the other hearing. Simmonds is deaf herself, and helped the director on set, in addition to teaching ASL to her co-stars. Krasinski co-wrote the screenplay with filmmaking partners Bryan Woods and Scott Beck, with cinematography by Charlotte Bruus Christensen (The Girl on the Train, Molly’s Game), and counts Michael Bay (Transformers) as a producer.

The film has received terrific praise, currently holding a 95 percent fresh rating on reviews aggregator Rotten Tomatoes. Writing for The A.V. Club, A.A. Dowd said: “A Quiet Place takes [the contrast between deathly silence and deafening cacophony] to a new extreme, engulfing characters and viewers alike in an eerie sustained hush, and then generating anxiety about how and when it will suddenly be shattered. It turns sound itself, cinema’s first invader, into a threat.”

How to access: Amazon US, Amazon Video US, Google Play IN, iTunes IN, or Microsoft Store US
Time commitment: 1 hour and 30 minutes

Lean on Pete
The latest film by English writer-director Andrew Haigh – best known for 45 Years (2015) and Weekend (2011) – is set in the US, adapted from Willy Vlautin’s 2010 novel of the same name. It follows a 15-year-old named Charley Thompson (Charlie Plummer) and his single father who move to Portland, Oregon after a series of hardships.

Charley finds work at a local racetrack and forms a bond with an aging horse named Lean on Pete, with help from the horse’s bad-tempered owner Del Montgomery (Steve Buscemi) and his seasoned jocket Bonnie (Chloë Sevigny). When he discovers that the horse is bound for slaughter, Charley escapes with his new friend Pete into the American wilderness in search of his aunt and a place to call home.

After premiering at the Venice Film Festival last year, Lean on Pete is now available on home media and has good reviews. Vox’s Todd VanDerWerff called it one of his favourite films in 2018 and added: “A horse might not be able to feel love for a teenage boy, but Lean on Pete makes sure you know how deeply a teenage boy can feel love for a horse.”

How to access: Amazon US, Amazon Video US, Google Play US, iTunes US, or Microsoft Store US
Time commitment: 2 hours and 1 minute

Other mentions
Amazon’s Comicstaan, a reality show about finding India’s next stand-up comedian, released its first four episodes on Friday.

Over at Netflix, you can now stream Archer season 9 with Ryan Coogler’s Michael B. Jordan-starrer Fruitvale Station coming Sunday. Check out our July guide for more options.

Sacha Baron Cohen returns to television with a new half-hour satirical series called Who is America? which starts Sunday in the US. It might be available on Hotstar in India, thanks to the exclusivity deal between Star India and CBS for Showtime original shows.

Video games
There are two great titles for the Nintendo Switch week this week: one new and one port. The former is Octopath Traveler, a new RPG from Square Enix that sends you on an adventure as one of eight travellers, each of whom have their own origins, paths, and goals. Its world is a mix of CG, pixel art, and "HD-2D" visuals, and it has turn-based combat with an innovative battle system. Octopath Traveler has a 84 score on Metacritic from 33 publications.

The latter port is Captain Toad: Treasure Tracker, originally released for the Wii U in 2014. Now available on the Switch, it has two-player co-op multiplayer and new levels themed on Super Mario Odyssey. It has a 81 score on Metacritic from 36 publications.

Music
Palo Santo by Years & Years
British synth-pop band Years & Years, led by popular frontman Olly Alexander who’s been outspoken for LGBT rights and mental health, returned last Friday with their second full-length album, after releasing two singles – “Sanctify” and “If You’re Over Me” – in the past few months, to promote the new effort that features contributions from the likes of Greg Kurstin, Steve Mac, Julia Michaels, Justin Tranter, and Two Inch Punch.

Palo Santo has been appreciated by critics. The Guardian’s Laura Snapes said it “refashions religion’s stark language of judgment and sin as matters of human nature”, “expands their ambitions in adrenaline-filled songs of heartbreak smothered with self-destruction” and concluded: “It’s probably not what anyone expects a male pop star to do in 2018. But listening to the astute, convincingly ambitious Palo Santo, you wish more of them would.”

Over at The Independent, Roisin O’Connor thinks Years & Years are the best pop in the UK at the moment. She also noted the use of “religious iconography to explore themes of sexuality, queerness and guilt in the most gloriously unapologetic fashion” in addition to a “soulful and raw” sound for the slow-tempo songs, and praised Alexander’s “courage to put all of that vibrant, dynamic character on full display”.