13 Reasons Why, Thimbleweed Park, and More – The Weekend Chill 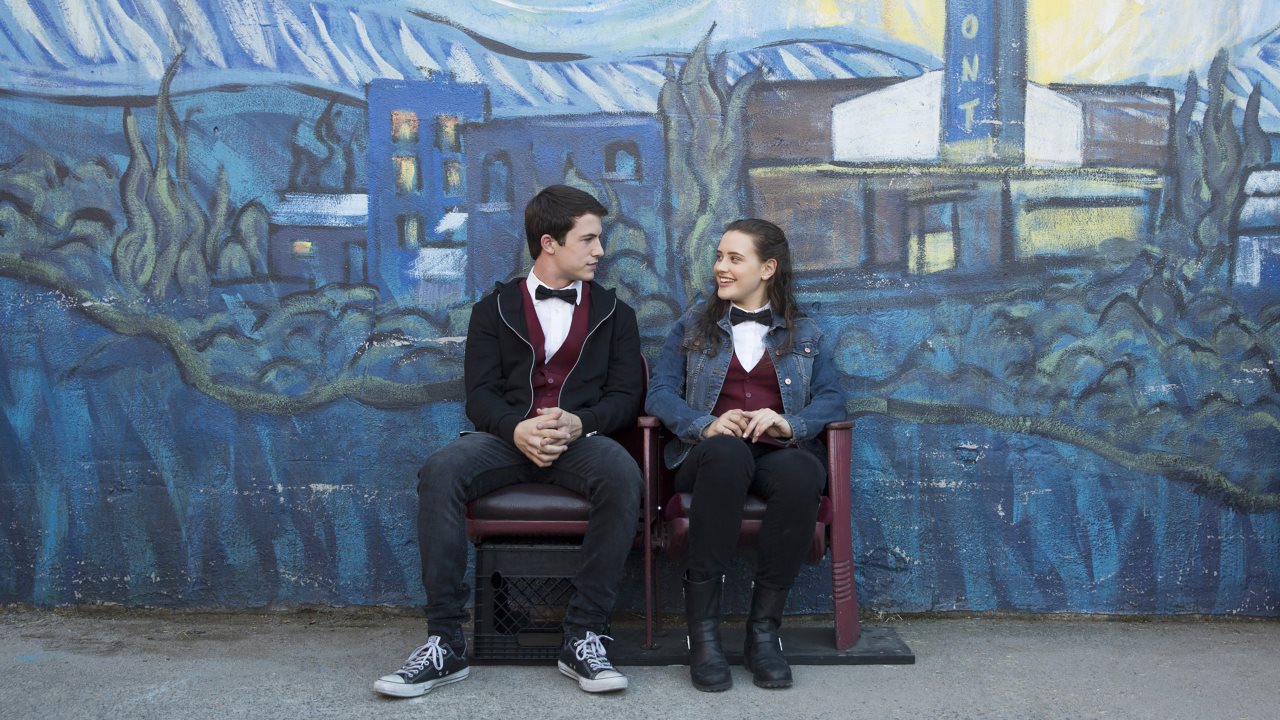 Warner Bros released the first trailer for its live-action superhero team-up Justice League over the weekend, which provided a look at what to expect from the Zack Snyder film. Hopes are obviously low this time around, after the studio’s failures with Batman v Superman: Dawn of Justice, and Suicide Squad last year. Justice League releases on November 17.

On Monday, we got our first look at Alicia Vikander as Lara Croft in the upcoming Tomb Raider reboot, courtesy of Vanity Fair. It also provided more details on the plot of the film, which finds 21-year-old Lara working as a bike courier in London, not interested in the business empire her missing father left behind. Eventually, she gets pulled into the mystery, and travels to his last known location. Tomb Raider will release March 16, 2018.

Spider-Man: Homecoming got a second (spoiler-filled) trailer on Tuesday, which basically gives us the major beats of the film. If you don’t want to be spoiled, you’re better off staying away from all new footage, until July 6. That’s when it hits cinemas.

Also on Tuesday, Disney announced that a sequel to Wreck-It Ralph would be coming on March 9, 2018. The only thing we know for now is the new title: Ralph Breaks the Internet, and that it will be directed Rich Moore and Phil Johnston. Moore co-directed, and Johnston co-wrote both Wreck-It Ralph, and Zootopia.

On the same day, Netflix said that it had picked up global distribution rights for period revenge thriller Apostle, which comes from The Raid director Gareth Evans, starring Michael Sheen, and Dan Stevens (Legion). Filming begins next month, with an expected release in 2018.

The second teaser trailer for Luc Besson’s Valerian and the City of the Thousand Planets arrived on Wednesday, giving us a glimpse at the crazy, idiosyncratic vision of Besson. He’s known for such zany, over-the-top sci-fi action pieces, and hopefully this one will be a good movie as well. The film releases July 21.

Thursday turned out to a big day for Warner Bros’ DC Extended Universe. Variety reported that Joss Whedon is “nearing a deal” to write, direct, and produce a standalone Batgirl film for the studio. It will most likely feature Barbara Gordon, daughter of Commissioner Gordon. Whedon has experience in the superhero genre, having worked on the rival Marvel universe, with both Avengers films so far.

Fox released a new trailer for its man vs ape sci-fi film, War for the Planet of the Apes, on Thursday. There’s a great deal of action (as before), and more of Woody Harrelson staring down Caesar (Andy Serkis, via mo-cap). It will open in theatres July 14.

Lastly, HBO released a promotional video for the seventh season of Game of Thrones, which features Jon Snow, Daenerys Targaryen, and Cersei Lannister going on a long walk through their respective kingdoms. There’s no actual footage from the season here, just 90 seconds of nicely shot marketing material. Game of Thrones returns to air July 16.

TV:
13 Reasons Why
Clay Jensen (Dylan Minnette) comes home one day to find a shoe-box full of cassette tapes lying on his porch. They’re from Hannah Baker (Katherine Langford) – his classmate and crush – who committed suicide two weeks ago. On tape, Hannah explains that there are thirteen reasons why she decided to end her life, and each tape explains how 12 students played a role in her death.

A Netflix original series, it’s based on Jay Asher’s book of the same name. The story weaves its story through the dual narratives of Clay and Hannah, while telling an intricate story of teenage life. Early reviews think that it does well to connect the dozen tales recited by Baker, and the characters themselves, though there are some missteps along the way.

Five Came Back
Based on Mark Harris’ book of the same name, Five Came Back is a three-part documentary mini-series that explores the story of Hollywood’s impact on World War II, and vice versa, through the eyes and lens of five filmmakers who were dispatched to the frontlines: John Ford, William Wyler, John Huston, Frank Capra, and George Stevens.

Directed by Laurent Bouzereau, narrated by Meryl Streep, and written by Harris himself, the docuseries features interviews with five directors of today: Steven Steven Spielberg, Francis Ford Coppola, Guillermo Del Toro, Paul Greengrass and Lawrence Kasdan. Each of them are given one of the 40s’ directors to talk about extensively.

It’s a bit uneven in its execution, but it’s still fascinating since the stories are larger than life, (made bigger still by Thomas Newman’s gallant score) covering not just the filmmakers, but what they saw, and how it affected them. The irony in its presentation, says Chuck Bowen of Slant, is how it turns out to be “a propagandistic examination of propaganda”.

How to access: Netflix
Time commitment: 3 hours and 15 minutes

Movies:
The Handmaiden
Told over three parts, The Handmaiden is a psychological thriller from acclaimed Korean director Park Chan-wook, best known for his work on Oldboy (2003). The film borrows from its literature inspiration, Sarah Waters’ Fingersmith, but transports that story to the colonial era of Korea and Japan, in the 1930s.

The premise goes like this: A young, wealthy Japanese aristocrat – Lady Izumi Hideko (Kim Min-hee) – lives in seclusion. A Korean thief, Sook-hee (Kim Tae-ri), hired to serve as her new handmaiden, is secretly involved in defrauding her of her fortune, at the behest of a conman, Count Fujiwara (Ha Jung-woo).

The Handmaiden premiered at 2016 Cannes Film Festival, and was heavily featured in the top ten lists of various critics last year. Most of the film’s power is down to the terrific performances from Min-hee, Jung-woo, and Tae-ri, the latter making her debut.

20th Century Women
Written and directed by Mike Mills – who was nominated for his screenplay at this year’s Oscars – 20th Century Women is a comedy-drama film starring Annette Bening, Elle Fanning, Greta Gerwig, Lucas Jade Zumann, and Billy Crudup. The film was also nominated for Best Picture at the Golden Globes, with Bening getting a nod for Best Actress.

It’s set in 1979 Californian summer, with a Santa Barbara single mom and landlord named Dorothea Fields (Bening) deciding to parent her teenage son Jamie (Zumann) by soliciting the help of her lodgers: Gerwig plays a photographer, Crudup a handyman, and Fanning is Jamie’s best friend.

The story is semi-autobiographical, since Mills was raised by his mom and sisters. In an interview, he called the film a “love letter” to them. The Blu-ray version includes a commentary with Mills, and featurettes on the cast and the making of the film.

Fantastic Beasts and Where to Find Them
JK Rowling took every Muggle back to the magical world with the first (of five) Harry Potter spin-off film, that released last year. Set in 1926 New York, it drew its title from a book Potter read at Hogwarts, called Care of Magical Creatures. The film followed its British author - Newt Scamander, played sheepishly possibly to a fault by Oscar-winner Eddie Redmayne – before the book had been written, with the author on a pursuit to learn more about these, well, fantastic beasts.

The film had its share of enchanting moments, while making errors elsewhere. For Harry Potter fans, though, that probably didn’t matter. The Blu-ray version, now available, comes with 14 minutes of deleted scenes, and several featurettes that delve into the creatures, and characters further. In addition, you also get interviews with Rowling, the cast, and director David Yates.

And if you’ve got a 4K HDR-capable TV, you owe it to yourself to fork out $39.99 (about Rs. 2,500) on the best version of Planet Earth II. The nature documentary series, narrated by Sir David Attenborough, is now available in a 4K version.

The Pacific, the Emmy-winning mini-series focused on WWII’s Pacific Theater, is an excellent companion piece to its better European-centric cousin, Band of Brothers. If you haven’t seen the former, Star World Premiere will begin airing it on Saturday, April 1 at 12 pm. Both are also available via Hotstar, if you prefer binge-watching it.

Video games:
Thimbleweed Park
A murder mystery kick-starts the events that take place in and around Thimbleweed Park, introduced to us through two FBI detectives – Agent Ray, and Agent Reyes. As you dig deeper, you’ll come across three other characters: a comedian fallen on hard days Ransome the *Beeping* Clown, aspiring game developer Dolores Edmund, and her father Franklin, a ghost.

The game harkens back to the era of point-and-click adventure titles, which means the bottom third of the screen contains actions such as ‘Open’, ‘Close’, ‘Pick up’, and ‘Use’. Thimbleweed Park combines sharp and hilarious writing – a large part of it self-referential – along with complex puzzles that involve paying attention to dialogue, and clicking objects in your environment with various action verbs.

Ex-LucasArts veterans Ron Gilbert and Gary Winnick – best known for creating Maniac Mansion over two decades ago – bring their A-game to Thimbleweed Park, and pen “an appealing, and effective love letter” in the process, as we said in our review.

How to access: Xbox One, or Steam for Windows, macOS, and Linux
Time commitment: 10 hours