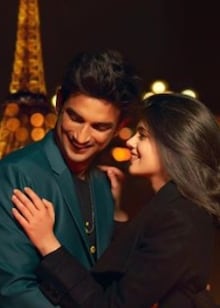 Dil Bechara is a romantic tragic-comedy Bollywood movie about two individuals who are severely ill but fall in love with each other to live the rest of their days being happy, strong and staying positive. The movie is an adaptation of the bestseller novel 2012, The Fault in Our Stars" by John Green

Dil Bechara is about two ordinary individuals Manny and Kizie who are engulfed with a terminal illness but wish to live their life to the fullest. Emmanuel Rajkumar Jr. a.k.a. Manny (Sushant Singh Rajput), who suffers Osteosarcoma but survives it on the cost of losing one of his legs, and then there is Kizie Basu, played by debutant Sanjana Sanghi, who is also a cancer patient and takes life as it comes but wishes to have a normal life just like any other college-going girl. Kizie being an introvert girl and Manny being the total opposite, the two meet at the cancer support group and strikes a beautiful bond instantly which makes them fall for each other. Knowing that they will die sooner or later they decide to live life to the fullest despite the unavoidable tragedy emerging their way.

After the sudden demise of Sushant Singh Rajput, the movie was premiered on popular on OTT platform, Disnep+ Hotstar for both subscribers and non-subscribers. Wait no more and click on " Watch On Disnep+ Hotstar" button to watch his last Bollywood movie. The trailer of Dil Bechara looks intriguing. Take a look at the official Dil Bechara trailer and see the late Sushant Singh Rajput in a charming avatar.

Dil Bechara movie score and soundtrack album both are composed by A. R. Rahman. The lyrics are penned by Amitabh Bhattacharya.