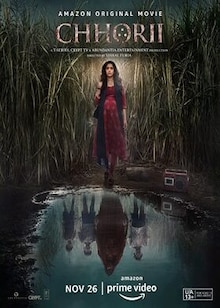 Sakshi (Nushrratt Bharuccha) is eight months pregnant. After being forced out of her home, she seeks refuge in a house seated in desolated sugarcane field along with her partner (Saurabh Goyal). The house is inhabited by an old couple (Mita Vashisht and Rajesh Jais), who might be hiding some truths from the past. As horror begins to settle in, Sakshi must save herself and her unborn child from the evil. Chhorii is the official remake of Vishal Furia’s Marathi horror film Lapachhapi. It also marks Barucha’s first solo film project.