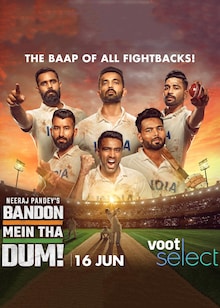 Share
Documentary Sport
4.2 ★ 2022 Season 1 Hindi 7+
A televised adaptation of Indian cricket team's 2020/21 tour of Australia and how they defeated the latter in the Gabba Test match ? breaking a record of 32 years.

In the India-Australia Test series of 2020/2021, the Indian cricket team made history by defeating Australia in their home turf at Gabba, where Australia hadn't lost a single test match in the last 32 years.

The show also includes behin-the-scenes footages and candid narratives from the cricketers, coaches, and journalists involved at that time.