Bala (2020) is a satirical black comedy-drama that takes a dig at the unfair treatment against bald and dark-skinned people in Indian society. The film is an official remake of the Kannada movie Ondu Motteya Kathe and was showcased in the Indo-German Filmweek 2020 in Berlin. The film revolves around a fairness cream salesman in his late twenties named Bala (Ayushmann Khurrana) suffering from premature baldness. Tired of being a laughing stock, he resorts to wearing a wig and starts feeling confident again. Soon he falls for Pari Mishra (Yami Gautam), a fair-skinned model and has a perfect love tale ending up in marriage. While Bala is confident that Pari knows about his baldness through a text he had sent her before the wedding, he doesn’t realize that it was delivered to the wrong person. The misunderstanding is cleared only when Latika (Bhumi Pednekar), his dark-skinned lawyer friend storms into his house to confront him about a fake social media account that Bala had made pretending to be her. The exchange of bitter verses leads to Pari discovering the truth about his baldness. Appalled at this betrayal, she decides to leave Bala and get the marriage annulled. Desperate to save his marriage, Bala seeks help from Latika. The rest of the story unfolds with the court proceedings, the fate of his relationship, and a journey of self-acceptance. 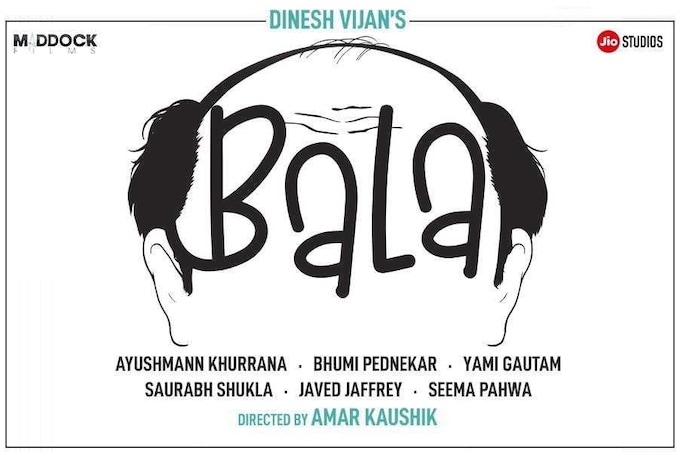 The story of Bala revolves around the character of Balmukund Shukla aka Bala, who suffers from extreme premature baldness, thanks to his diabetes and bald pate, and tries every possible remedy to grow back his hair until he finds a solution to it, which is to fix a wig on his head.
Due to this baldness, not just personally, but he goes through a lot even in his professional career. His childhood sweetheart leaves him and he gets demoted at his job as the salesman for a women’s fairness cream. He later becomes a stand-up comedian where he imitates Bollywood stars and at the same time he keeps trying all types of ridiculous and bizarre remedies for hair growth. Latika, played by Bhumi Pednekar, is a strong-headed lawyer who faces the bias of the society due to her dusky complexion. On the other hand, Pari Mishra, played by Yami Gautam, is a beautiful fair girl who is the Superstar of Kanpur and is full of herself as she is a popular social media influencer. The film gives a strong message of societal discrimination based on a person’s appearance.

The performances of all the characters and their comic timing keep the audience glued to their seats throughout the movie. Do go and watch the movie because it surely not going to disappoint your expectations in any way.

Bala movie raised the concern of body-shaming and showcased how this can affect the confidence of one person. Ayushmann and Bhumi have come up with their outstanding performances and so if you've missed watching Bala full movie online in HD, click on Watch On Disnep+ to watch the film right away.

Bala teaser was hilarious but Bala official trailer is even more nerve-wracking. Have you watched the Bala trailer yet?

The first song from the Bala movie is now OUT. Take a look below.